1778-1814. Born on 18 November 1778, he was the fifth son of the diplomat and politician John Stuart, the Marquess of Bute, and of his wife, Hon. Charlotte Jane Hickman-Windsor. A younger brother was Rear-Admiral Lord George Stuart, and their grandfather, the Earl of Bute, was the first Tory prime minister, holding the office during 1762-3.

Educated at Eton from 1789-91, Stuart was aboard the Lion 64, Captain Erasmus Gower, which sailed with the Lord Macartney embassy to China in 1792 and returned to England in September 1794. He became Lord William Stuart in 1796 upon his father s elevation in the peerage to that of a Marquess, was commissioned lieutenant on 11 October 1797, and officially promoted commander of the Corso 18 on 24 December 1798, although in the previous month Lieutenant Coryndon Boger of the Majestic, acting for Stuart in command of this vessel, had captured a prolific privateer and driven another ashore after seeing a convoy into Gibraltar. 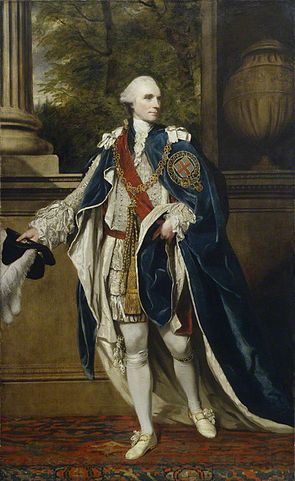 Stuart was the grandson of the first Tory prime minister, the Earl of Bute.

Stuart was posted captain of the Nile-prize Spartiate 74 at Plymouth on 9 November 1799. He commanded the Lion 64 from April to July 1800 in succession to Captain Manley Dixon, and then had the Champion 24 in the Mediterranean, joining Rear-Admiral Sir John Borlase Warren squadron in the pursuit of Rear-Admiral Honor Ganteaume squadron from January-July 1801. The Champion later accomplished the recapture of the sloop Bulldog 18 off Gallipoli on 16 September, and Stuart remained in command of her until the peace in 1802.

On 10 July 1802 he was elected the M.P. for Cardiff in the family interest, a seat he retained until his death in 1814, and although there was some early uncertainty as to his political allegiance, particularly as he did not necessarily adhere to his father s political views, he was at length identified as a supporter of William Pitt.

In June 1803 he joined the Crescent 36 and proceeded to the Humber prior to returning to Sheerness and then sailing for the Downs in October. He was back at Sheerness in April 1804 and from June flew his broad pennant off Flushing whilst Captain Sir William Sidney Smith went ashore to recover his health. On the 23rd the smaller vessels in his squadron engaged without great effect twenty-odd schuyts which were running from Ostend to Flushing. A distraction came in July when one of his lieutenants, Hiram Frazer, was brought to a court-martial at Sheerness on a charge of drunkenness and plotting to shoot Stuart, but the officer was acquitted of the latter charge, and after a strong character reference from Commissioner Hon. George Grey was merely sentenced to be dismissed from the Crescent. Meanwhile in Smith s continuing absence it was intended that Rear-Admiral William Domett would assume the command of the Ostend squadron and would raise his flag aboard the Antelope 50 with Stuart as his flag-captain, but in the event Smith recovered sooner than expected and Stuart s command was instead ordered to attend Their Majesties at Weymouth during August. Returning to active duty, the Crescent was employed in the Channel during 1805, delivering letters from the fleet to Plymouth in October, whilst in November she captured a cheese-laden galliot off the Penmarks.

In December 1806, a month after being re-elected the M.P for Cardiff, Stuart took the new Lavinia 40 out from Falmouth to join the Channel fleet. On 15 July 1807 he put into Plymouth after what was described as an unsuccessful four-month cruise off Cape Ortegal , but on returning to that coast he learned of the French threat against Portugal and took it upon himself to enter Oporto and remain there for several weeks rendering every assistance to the British merchants and inhabitants. He eventually arrived at Portsmouth having left Oporto on 2 November with a thirty-five sail convoy from which he had parted company five days later off Cape Finisterre.

During the first part of 1808 Captain John Hancock acted for him in command of the Lavinia off Portugal, Rochefort and in the Mediterranean, and after returning to duty Stuart went out to the Iberian Peninsula once more from Portsmouth on 24 November, giving passage to the Army commander-in-chief, Lieutenant-General Sir John Craddock, several eminent Spaniards, and carrying money for Coruna and Oporto. In January 1809 he took a convoy of transports out of the Channel for the Mediterranean, and on 27 April left St. Helens with a fifteen-ship East India convoy which he escorted to an agreed latitude before returning to Portsmouth in early July.

During the Schelde campaign from July 1809 Stuart led a force of ten heavy frigates in forcing the Channel between Cadzand and Flushing after Rear-Admiral Sir Richard Strachan had become frustrated at the Army s attempts to force a breakthrough. He returned from that campaign to Portsmouth on 13 September, and went out to the Mediterranean in December from where the Lavinia returned to Portsmouth with a convoy in May 1810. Sailing for Portugal once more, he came back to Portsmouth in October with several gentlemen from that country who had been involved in a conspiracy at Lisbon.

In December 1810 Stuart was appointed to the newly launched Conquestador 74 at Portsmouth, joining her in the following March and sailing at the beginning of April for the Basque Roads, where on 27 December 1811 an attack by her boats and those of the Colossus 74, Captain Thomas Alexander, on a French flotilla ended in failure with one hundred and thirteen men being taken prisoner. On 3 March 1812 the Conquestador grounded in Quiberon Bay but was able to re-float under her own devices, although by then the local French inhabitants had already sent boats out to her rescue. After being towed back to Plymouth by the frigate Rota 38, Captain Philip Somerville, Stuart was court-martialled on 16 April and absolved of any blame for the mishap.

At the beginning of 1813 he took the Conquestador out to Brest from Plymouth, only to be driven back to the Devonshire port within a matter of weeks by strong westerly gales. On 11 March 1814 he departed Cork for the West Indies with a convoy, arriving at Barbados on 23 April, but whilst making the return voyage with the Jamaica fleet he died on 28 July from a fever that took the lives of twenty-nine other men on board his command.

In June 1806 Stuart married Hon. Georgiana Maude, the daughter of the politician Viscount Harwenden, and they had issue one daughter before his wife s death near Bath, aged 26, on 31 August 1807.