c1770-1804. He was baptised on 20 April 1770, the eldest son of Sir Charles Davers of Rushbrooke Hall near Bury St. Edmunds in Suffolk, the M.P for Bury St Edmunds from 1774-1802. His father was regarded as neither a supporter of the government nor of the Whig opposition. His mother, Frances Treice, was not married to Sir Charles, and thus their five sons and three daughters were all illegitimate.

Davers was commissioned lieutenant in November 1790 upon the conclusion of the Spanish Armament.

Whilst serving aboard the Boyne 98, Captain George Grey, the flagship of Vice-Admiral Sir John Jervis during the Leeward Islands campaign of 1794, Davers was appointed acting-captain of the sloop Inspector 16 for Commander Wyndham Bryer in April, and he then commanded the Bulldog 16 on that station from 13 May, in which he assisted at the evacuation of St. Lucia in June 1795. 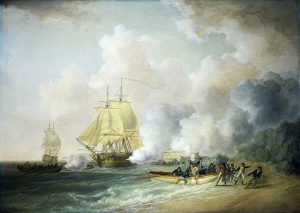 Davers achieved his promotion to captain during the Leeward Islands campaign of 1794 – here depicted is the capture of Fort Louis on Martinique.

On 4 July 1795 he was posted captain of the Aimable 32, which frigate had recently been brought out to the Leeward Islands by Captain Francis Laforey with that officer’s father, Admiral Sir John Laforey, the new commander-in-chief, and in which he captured and burned the French corvette Sans Culottes 18 on 22 September. Briefly in the early spring of 1796 he commanded the Mermaid 32 on the same station after Captain Henry Warre had returned to England with dispatches, and he then joined the Scipio 64, leading a small squadron which captured ten Dutch merchantmen off Surinam in July and remaining thereafter in blockade of that territory. He subsequently served under Rear-Admiral Henry Harvey’s orders at the capture of Trinidad on 18 February 1797, before returning to England in August with a convoy after an eight-week passage and paying the Scipio off at the end of November.

In December 1799 Davers commissioned the new eighteen-pounder frigate Active 38, initially engaged in convoy duty in home waters, in the course of which employment he brought a large convoy from the Downs into Portsmouth in April 1800. At the end of June his command left Portsmouth with an East India convoy, and she came back into the Hampshire port on 9 September whereupon Davers, who was suffering from yellow fever, handed over command to Captain John Giffard who took the frigate on an autumn cruise.

In February 1801 Davers resumed command of the Active, one of his earliest tasks being to request a court martial on eight men who were accused of mutinous and seditious actions, resulting in a flogging round the fleet for the four chief offenders. At the beginning of April he returned to Portsmouth after a brief reconnaissance of Le Havre, and in May the Active took troops and specie out to Egypt in the company of the Leda 38, Captain George Hope. With Davers’ illness returning, Captain Thomas Shortland was appointed to the temporary command of the Active in October whilst she was still at Gibraltar, but Davers resumed his position before the end of the year.

On 27 March 1802 the Active was in Lisbon when Davers and Captain Zachary Mudge of the Constance 22 were detained from midnight to early the following afternoon by the captain of the guard after protesting over the detention of their barge crews for allegedly smuggling prohibited merchandise. They were released on the intervention of the British ambassador, John Hookman Frere, and HRH the Duke of Sussex, who had recently been appointed the governor of Gibraltar. Because of the possible severity of the diplomatic consequences, the Constance was immediately ordered home where Mudge reported the incident to the Privy Council so that a proper apology could be demanded from the Portuguese.

Continuing in the Mediterranean during the peace of 1802, the Active was sent with the Triumph 74, Captain Sir Robert Barlow, from Gibraltar to Algiers to demand the release of three merchantmen which had been detained by the Dey, although it would be the end of the year before the matter was resolved. On 19 September the Active was at Gibraltar when a severe thunderstorm struck the Rock and a flash of lightning split her top-gallant mast, carried away the main topmast, split the main-mast in several places, and struck the ship’s butcher dead. She remained sometime thereafter at the mole in Gibraltar undergoing repairs. In February 1803 she sailed from the Rock to Malta with payment for the troops, and by 1 May was at Leghorn.

During March 1804 the Active was at Woolwich completing repairs, but with his health once more in decline Davers resigned the command in favour of Captain Richard Hussey Moubray during August.

Captain Davers died from the effects of yellow fever on 6 January 1804 at Rushbrooke Hall.

On 23 September 1803 he married Miss H Gibbons of the Oaks, near Wolverhampton.