1735-1802. He was born on 15 July 1735 at Appleby, Westmoreland, a younger son of the successful tradesman Charles Robinson, and of his wife Hannah Deane, the sister of Captain Joseph Deane. His brother, John Robinson, served as the M.P for Westmoreland and later for Harwich, and was the Secretary to the Treasury in Lord North’s government from 1770 until 1782.

Robinson joined the Navy in 1750 after satisfying his father’s wish that he undertake employment for at least two years aboard a coasting vessel to ensure that he was embarking on the appropriate career. He was commissioned lieutenant on 5 August 1761, seeing service for eighteen months aboard the Union 90, Captain Thomas Evans. 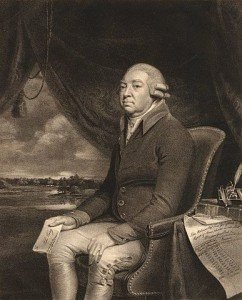 Admiral Robinson’ short career came to an end when his brother, John Robinson, left the Government in 1782.

On 10 January 1771 he was promoted commander of the fireship Blast 8, but she was surveyed in September and broken up. On 23 January 1777 he was appointed to fit out the sloop Swift 14 at Portsmouth, and after first taking her to sea on 3 February, he later departed the harbour for Spithead on 15 March before leaving her shortly afterwards when she came under orders for North America.

Robinson was next employed in fitting out the newly commissioned Proteus 26 at Woolwich, and having been posted captain of her on 8 May 1777 he sailed for Quebec the next day with three transports and a store-ship. During their stay in the St. Lawrence his crew were struck down with the flux and the ship was unable to sail for over six weeks. By October, the Proteus had arrived at Antigua from Quebec carrying a fair number of smugglers aboard, many of whom formed her barge crew, but who now took the opportunity to desert. Being sent home to England with a convoy, the Proteus entered Portsmouth for repair on 6 February 1778.

In February 1778 Robinson recommissioned the frigate Guadeloupe 28, and he joined Vice-Admiral Hon. John Byron’s fleet that sailed for North America on 9 June. When this force was scattered by stormy weather, the Guadeloupe was able to get into Newfoundland but had to return immediately to England for repairs. After a refit and coppering at Portsmouth the frigate sailed for North America in May 1779 with Vice-Admiral Marriot Arbuthnot’s convoy, although not before this force had been delayed by the requirement to attend to the relief of Jersey. Once on the other side of the Atlantic, she captured the rebel privateer Morbus 12 on 9 October 1780, which was sent into New York.

Remaining on the North American station, Robinson commanded the Guadeloupe at the Battle of Cape Henry on 16 March 1781, and on 30 August managed to escape up the York River when the French fleet entered the Chesapeake. Here she endured the red-hot shot from the American batteries at Yorktown, and with the French fleet bottling her up after the Battle of Chesapeake Bay on 5 September there was no other option but to scuttle her on 10 October. The attempt was not a complete success, for the French were later able to salvage her and she served briefly under their colours.

Robinson returned to England after the loss of the Guadeloupe, but with his brother no longer in government following the change of administration in early 1782 he was unable to secure another command. He became a superannuated rear-admiral in July 1794 and died suddenly at his residence in York on 15 November 1802, being buried in St. Saviours Churchyard.

Robinson married a West Indian woman in his younger days, but she suffered from poor health and despite the money he lavished upon doctor’s bills she died shortly after their weeding without issue. On 24 March 1787 he married 22-year-old Mary Myers of Barton, Westmoreland, by whom he fathered thirteen children, all born in York. Two of his sons, Charles, and Thomas, entered the Navy and reached the rank of lieutenant.

He was well regarded by the King, who curiously declared that ‘Captain Robinson was well-bred’ and had as ‘handsome a leg and foot as any man he knew.’ George III also had a great liking for Robinson’s brother. John.