1776-1864. He was the brother of Commander Charles Thompson and Major James Thompson of the Royal Marines. Another brother, William, died whilst serving as a purser in the West Indies in 1802.

In December 1787 Thompson was entered onto the books of the sloop Scout, Captain Charles Cobb, and in 1791 he was aboard the Woolwich 44, Captain William Nowell, serving thereafter on the Brunswick 74, Captain Sir Roger Curtis, all on the home station. 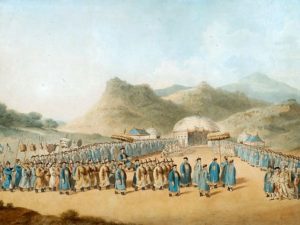 Thompson saw service in the famous 1792 embassy to China

In June 1792 he joined the Lion 64, Captain Erasmus Gower, going out to China with the celebrated embassy led by Lord Macartney, although he found himself aboard the Lion s tender, Jackall, which under the command of a masters mate, James Sanders, parted company in the Channel before finally rejoining the mother ship in the Straits of Sunda.

After returning to England, and having earlier been commissioned lieutenant with seniority from 3 July 1793, Thompson joined the Prince George 100, Captain James Gambier, in October 1794, and was appointed as a lieutenant to the Bombay Castle 74, Captain Charles Chamberlayne, on 18 December. He served at the Battle of Hy res on 13 July 1795, and was the Bombay Castle s first lieutenant when she was wrecked in the Tagus under the command of Captain Thomas Sotheby in December 1796. At the court martial into her loss he was thanked by the president of the court, Vice-Admiral Charles Thompson, for his efforts in saving life on that occasion.

He next joined the Acasta 40, Captains Richard Lane and Edward Fellowes, going out to Jamaica and enjoying great success in command of her boats. On one occasion he cut out the privateer Mutine 16 with the assistance of a British privateer, and on another took a brig in the Bay of Venezuela that on the previous day had repulsed an attack by the boats of the Magicienne 32, Captain William Henry Ricketts. Following the Hermione mutiny on 22 September 1797 he audaciously tried to capture up to forty of the mutineers who were taking passage from Puerto Cabello to La Guira, but his six-oared gig was beaten off with the loss of one man killed and five wounded. He was rewarded for his conspicuous service by being taken aboard the Sans Pareil 80, the flagship on the Jamaican station of Vice-Admiral Lord Hugh Seymour, and, following that officer s death, of Rear-Admiral Robert Montagu.

On 28 April 1802 Montagu promoted Thompson commander to the sloop Tisiphone 8, and he returned to Sheerness from the West Indies in January of the following year to serve in the Sea Fencibles for about a year.

In January 1806 he was appointed to the sloop Fly 16, serving in the West Indies, in which he participated in the chase of a French squadron that included Jerome Buonaparte s Veteran 74. Following the capture of Montevideo on 3 February he joined the expedition which attempted to take Buenos Aires, and although the attack failed he was praised for his conduct in commanding the flotilla of gunboats. Appointed acting-captain of the prize frigate Fuerte 22, he came home with a convoy to arrive in January 1808.

Regrettably the Admiralty refused to confirm his posting to captain and Thompson was returned to the Fly after six months absence, seeing service thereafter on the French coast. He commanded a division of boats in the Schelde Expedition from July 1809, and after eventually being posted captain on 21 October 1810 he did not see any further service.

In 1805 he married a sister of Dr. Pickering of the Military College at Sandhurst and the couple had a large family, one of whom, Thomas Pickering Thompson, became an admiral. He lived his later years at Longparish, Hampshire.