1767-1828. He was born on 10 October 1767 at Fallodon, Northumberland, the third surviving son of General ‘no flint’ Charles Grey, of Southwick, County Durham, who was ennobled in January 1801 and became an earl in 1806, and of his wife, Elizabeth Grey. He was the younger brother of Earl Charles Grey, who as Viscount Howick was briefly the first lord of the Admiralty in 1806 and prime minister from 1830-4, and after whom the tea Earl Grey is named. One of his younger brothers was Lieutenant-General Sir Henry George Grey.

Benefitting from his family’s influence, Grey was commissioned lieutenant on 2 January 1781 at the early age of 13, and he was present aboard the Resolution 74 Captain Lord Robert Manners, at the Battle of the Saintes on 12 April1782. He was later a lieutenant aboard the Barfleur 90 during 1790-1, and at the beginning of the French Revolutionary War in 1793 was serving aboard the Quebec 32, Captain Josias Rogers.

He was promoted to the rank of master and commander on 8 August 1793 and joined the recently commissioned bomb Vesuvius 8 in which he arrived at Portsmouth on 19 October. A further promotion came when he was posted captain on 1 November, and he took leave of the Admiralty for Portsmouth to take up the position of flag-captain to Vice-Admiral Sir John Jervis aboard the Boyne 98, who with Grey’s father was to lead a combined expedition against the French possession in the Leeward Islands from January-December 1794. On several occasions during this campaign Grey led parties of seamen ashore, but during her time in the West Indies the Boyne lost many men to sickness. After collecting General Grey from Martinique, the Boyne set sail for home on 27 November 1794 to eventually arrive at Spithead after a difficult voyage on 21 January 1795, and Grey was still her captain when she blew up at Spithead on 1 May with the loss of eleven lives. 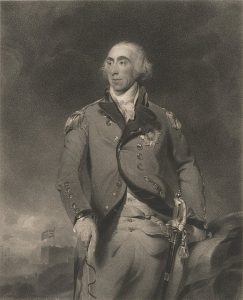 Grey was the son of General Earl Grey, known as ‘No Flint’ Grey for authorising his troops to attack with bayonet only on one particular engagement from the American Revolutionary War.

Although it was intended that the French prize Commerce de Marseilles 120 be renamed the Boyne and allocated to Jervis as his flagship with Grey as his flag-captain, it was then reported in July that Grey was to move to the Glory 98 at Spithead, and he retained this vessel until 2 October when he was appointed to the Victory 100, which was to serve as Jervis’ flagship in the Mediterranean. With that ship already on station Grey had to travel out to join her, and shortly after arriving he commanded her at the Battle of Cape St. Vincent on 14 February 1797,

In March 1797 the Ville de Paris 110 left Portsmouth under the command of Captain Sir Robert Calder to join the Mediterranean fleet, and on her arrival she accepted the flag of Jervis, who had been ennobled as the Earl of St. Vincent, whilst Grey also moved to this vessel as her commander, and Calder became the captain of the fleet. For the next sixteen months Grey continued to serve as the commander of the Ville de Paris whilst the fleet was either off Cadiz or in the Tagus, but excluded from the Mediterranean Sea.

On 2 July 1798 he left the fleet off Cadiz with St. Vincent’s dispatches and was landed at Lagos to post across Portugal for Lisbon where he intended to take passage for England, Delayed in the Portuguese capital for five days, he was eventually able to commandeer the sloop Peterel 16, Captain Henry Digby, when she came in to port, and upon reaching Plymouth he rushed up to London to deliver the dispatches to the Admiralty on 22 July. Unfortunately, newspaper speculation that the dispatches would confirm the destruction of Napoleon Bonaparte’s expedition from Toulon proved to be false, and it would be some months before news arrived home of Rear-Admiral Sir Horatio Nelson’s victory over the Toulon fleet at the Battle of the Nile. Meanwhile, at the end of August, Grey set off to rejoin the Ville de Paris off Cadiz, and with Calder having returned home on sick leave he became the captain of the fleet whilst Walter Bathurst was appointed to command the Ville de Paris. In order not to give offence to the senior captains who might have baulked at a post-captain of just five year’s seniority being installed as the captain of the fleet, this being a position that would normally have been taken by an officer of flag rank, St. Vincent gave Grey what he described as ‘a dormant appointment of adjutant-general of the fleet’.

At the time of the breakout of the Brest fleet on 25 April 1799 St. Vincent was in his sick quarters at Gibraltar whilst Vice-Admiral Lord Keith commanded the fleet at sea, however Grey, continued with his duties, and his personal intervention on the arrival in the fleet of the Impétueux 74, Captain Sir Edward Pellew, saw a number of mutineers punished following Admiral Lord Bridport’s earlier refusal to try them after a mutiny aboard that ship on 30 May. In August St. Vincent arrived back in England to recover his health, having requested that Grey return home with him, being ‘essentially necessary to my comfort’.

In December 1799 it was announced that Grey was to resume the command of the Ville de Paris which was refitting at Chatham for St. Vincent’s flag, and that month she went around to Portsmouth; however the admiral was too ill to return to employment and so his erstwhile flagship saw service instead in the Channel Fleet under the command of Captain Bathurst. When St. Vincent finally did assume command of the Channel fleet on 26 April 1800 Grey replaced Bathurst on the Ville de Paris, and at the end of July 1800 he took her into Portsmouth whilst St. Vincent continued at sea aboard the Royal George 100, Captain William Domett. The Ville de Paris remained at Portsmouth for some five weeks before rejoining the fleet and re-hoisting the commander-in-chief’s flag, and during the winter, whilst St. Vincent resided at Torre Abbey for the benefit of his health, the Ville de Paris was generally present in Torbay. In early February 1801 she went around to Plymouth, prior to her crew being paid, and she then rejoined the Channel Fleet in Torbay.

In March 1801 St. Vincent took on the role of First lord of the Admiralty, and having left the Ville de Paris Grey joined the royal yacht Princess Augusta at Yarmouth on the Isle of Wight in order to attend the royal family at Weymouth during their summer holiday, and in which town he briefly took up residence. On 24 April 1804 he became the commissioner at Sheerness Dockyard, in which capacity he earned praise for his activity in extinguishing a serious fire in July. At the end of that month he hosted the Princess of Wales, and on 9 January 1806 Lord Nelson’s coffin was taken on board Grey’s yacht Chatham from the Victory 100 at the mouth of the Thames prior to the vice-admiral’s funeral.

In July 1806 Grey was appointed the commissioner of Portsmouth Dockyard in the room of Captain Sir Charles Saxton, in October 1808 he welcomed the Prince of Wales to the port, and in November 1811 he hosted the Duke of Clarence. He was created a baronet on 29 June 1814 on the occasion of the Prince Regent’s visit with the allied sovereigns to Portsmouth, and he also had the honour of being presented with a diamond ring by the Emperor of Russia. He was further created a K.C.B on 20 March 1820. At the beginning of August 1822 he sailed his yacht to Greenwich to embark his patron and old friend, Admiral of the fleet the Earl of St. Vincent, in order to pay respects to the King who was to sail for Scotland, and when St. Vincent died on 14 March 1823, Grey was in attendance upon him.

On 18 June 1795 at Essendon Church, Hertfordshire, he married Mary, the youngest daughter of the brewer and politician Samuel Whitbread and of his wife, Lady Mary Cornwallis, although he was already brother-in-law to the politician Samuel Whitbread, that gentleman having married George’s older sister Lady Elizabeth Grey in 1788. The couple had had six daughters and three sons, the eldest of who, Sir George Grey, served three terms as home secretary between 1846 and 1866. His great-grandson was the Liberal politician Sir Edward Grey, who was the influential secretary of state for foreign affairs before and during the First World War.

Grey’s wife took a leading role in charities and religion to the benefit of the seamen and he too was religious. His politics were of the Whig persuasion, and he was a good friend of Richard Wynne, Vice-Admiral Sir Thomas Fremantle’s father-in-law.