1770-1815. Born on 5 February 1770, he was the eldest of nine sons of Admiral Lord Gardner and of his wife Susannah Hyde Gale. He was the brother of Major-General Hon. William Henry Gardner and of Rear-Admiral Francis Farrington Gardner.

Gardner joined the Navy in 1781 to serve with his father aboard the Duke 90, seeing action and being wounded at the Battle of the Saintes on 12 April 1782.

He was commissioned lieutenant on 12 January 1787, and was promoted commander of the sloop Cygnet 14 on 1 December 1788 whilst on the Jamaican station where his father was the commander-in-chief, his promotion arising as a result of various postings occasioned by the untimely death of Captain Hon. John Whitmore Chetwynd. He was posted captain on 12 November 1790 and upon the arrival of the Daphne 20 at Jamaica he exchanged with Commander Philip Durham into that vessel, his promotion being dated some ten days prior to that of a host of other young officers. In September 1791 he sailed for England via St. Domingo, and he arrived at Portsmouth at the end of October, delivering news of the Negro insurrection on Hispaniola. 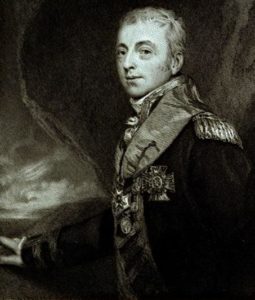 Gardner recommissioned the Circe 28 in April 1792, taking the payroll out to Nova Scotia from London, and arriving back at Portsmouth via Lisbon in December. During the first month of 1793 he was attached to Commodore Hon. George Murray s squadron in the Downs, and thereafter in the Schelde before returning to Portsmouth in the last week of January with war against France imminent.

Commissioning the Heroine 32 at the beginning of February 1793, he departed in March for the Leeward Islands with his father s squadron to serve in the largely unsuccessful campaign on that station. On 24 September his frigate arrived back at Plymouth having parted from the returning squadron eleven days earlier, and he immediately set off for the Admiralty with his father s despatches.

In December 1793 the Heroine sailed around to Portsmouth from where she departed for Calcutta on Christmas Day, although his father s expected appointment to the East Indies command did not materialise. Having arrived in Madras at the end of April 1794, Gardner joined the expedition under the command of Rear-Admiral Peter Rainier which took Trincomalee on 26 August 1795. He subsequently led a small squadron consisting of the Heroine, two sloops and five Indiamen with troops under Colonel James Stuart from the Cape that captured Colombo on 15 February 1796. His service in the East Indies terminated in March 1797 when he took passage home from Madras with his new wife aboard the East Indiaman Rockingham.

After over a year out of employment Gardner recommissioned the Ruby 64 in the early summer of 1799, sailing from Chatham to Blackstakes in the middle of July to take on ordnance prior to an intended departure for the East Indies. She was still in the Downs during August, but instead of sailing to the sub-continent she then joined Admiral Lord Bridport s Channel fleet.

From December 1799 he commanded the Resolution 74, sailing from Portsmouth to join the Channel fleet in January 1801 after a refit. Having survived a violent storm off Ireland his command arrived in Bantry Bay during November and witnessed the mutiny amongst other vessels there in the following month, although his crew took the trouble to confirm their loyalty to Gardner. The Resolution then went out to the West Indies to serve under Rear-Admiral Sir John Thomas Duckworth, and was paid off on 15 July following her return.

There now followed a most troublesome personal experience for Gardner, for whilst he was in the throes of a debilitating illness he had to come to terms with the fact that his wife had fallen pregnant during his absence in the West Indies, and she was delivered of a child in December.

Following the resumption of hostilities in the spring of 1803 Gardner was not re-employed until the autumn when he commissioned the new Hero 74 at Woolwich. In the following January he raised the flag of Rear-Admiral Thomas Macnamara Russell at Yarmouth before taking Rear-Admiral Edward Thornbrough s flag in February for a cruise in the North Sea. In June the Hero joined the Channel Fleet, and she patrolled off Rochefort and the Isle de Aix for fourteen weeks before entering Plymouth at the end of September. During February 1805 she was at Plymouth again before sailing to join the Channel Fleet in Torbay at the end of the month.

The Hero subsequently led the line at the Battle of Finisterre on 22 July 1805, with Gardner earning praise for tacking without authorisation from Vice-Admiral Sir Robert Calder, who was unable to observe the movements of the French line due to a heavy fog. During the battle the Hero suffered casualties of one man killed and four wounded. On 15 August Gardner returned to Portsmouth with the intelligence that the combined allied fleet had entered Ferrol, and once the Hero put to sea again she was attached to the Channel Fleet.

On 4 November 1805 Gardner again performed brilliantly at the Battle of Cape Ortegal, where Commodore Sir Richard Strachan s squadron captured Rear-Admiral Dumanoir Le Pelley s division of four sail of the line, which had escaped the Battle of Trafalgar. After causing sufficient damage to the straggling Scipion 74 he left his slower consorts to complete her capture and proceeded to tackle the French flagship Formidable 80. Once he had softened her up he then went on to engage the Mont Blanc 74 and receive the surrender of the Duguay Trouin 74. During the action the Hero lost ten men killed and fifty-one wounded, and she was badly damaged aloft.

In December 1805 Gardner was called to testify at the court martial of Vice-Admiral Calder, which investigated that officer’s conduct at the Battle of Finisterre, and in January the Hero formed part of Vice-Admiral Sir John Borlase Warren’s force that was sent in search of the French squadrons under the command of Vice-Admiral Leissègues and Rear-Admiral Willaumez. He thereafter remained in the Hero until May 1807, in which month he was presented to the King prior to a brief spell aboard the Ville de Paris 110, Captain William Bedford, in the Channel fleet as captain of the fleet to his father.

Gardner was promoted rear-admiral on 28 April 1808, and on 1 June was again presented to the King prior to hoisting his flag on 15 June in the Downs aboard the Bellerophon 74, Captain Samuel Warren. Departing on a cruise off Flushing under Vice-Admiral Russell, he returned to Deal on 6 August before departing once more for Flushing two weeks later, this being a pattern that was repeated several time during the rest of the year when he had the command of a half-dozen or so sail of the line.

He succeeded to the title of Lord Gardner on the death of his father on 1 January 1809 and on 4 May took his seat in the House of Lords. In June he re-hoisted his flag on the Bellerophon at Yarmouth in order to resume command of the Texel squadron, and during the Walcheren Expedition from July he was the fourth in command to Rear-Admiral Sir Richard John Strachan with his flag in the Blake 74, Captain Edward Codrington.

In September 1809 Gardner returned to Yarmouth aboard the Camilla 20, Captain James Bowen, before heading for London, and after seeing further duty off the Texel he arrived at Sheerness on 14 January 1810 aboard the Ruby 64, Captain Robert Williams, whereupon he immediately struck his flag. In the following month he was given leave from the House of Lords to attend the House of Commons Inquiry into the conduct of the Walcheren Expedition..

In August 1810 he was appointed the commander-in-chief at Yarmouth, and on 1 September raised his flag aboard the Roebuck 44, Captain Richard Curry, although in December he repaired once more to London for a short while. He then resigned his post at Yarmouth in May 1811 following the untimely death of his wife.

Entering retirement, Gardner remained in the public eye through his appearances in the newspapers as a fashionable arrival . In August 1812 he visited Edinburgh with members of his late wife s family and his suite , moving on thereafter to Glasgow, and by January 1813 he was back in London before leaving for his seat at Taplow near Marlow in February. A further excursion with his wife s family was to Ireland in July. In the meantime he was promoted vice-admiral on 4 December 1813 and nominated a K.C.B. on 2 January 1815.

Lord Gardner died on 22 December 1815 in Berkeley Square, London, and he was buried in St James , Westminster. On 30 September his elevation to a viscountcy had been announced by the Prince Regent, and in his will he was titled as such, but the patent had not been completed at the time of his death. His son, Alan, inherited his barony after it was formally established in 1825 that the son born to Gardner s first wife in 1803 was illegitimate.

He married the young and reputedly beautiful Maria Elizabeth Adderley of Innishannon, County Cork, at Fort George, Madras in March 1796, but the marriage was dissolved with Royal Assent on 10 July 1805 following a court case a year earlier on account of her adultery and her giving birth to an illegitimate child on 8 December 1802. On 10 April 1809 at Whitehall he married Hon. Charlotte Elizabeth Smith, the third daughter of Lord Carrington, and before her death at Yarmouth after a steady decline on 27 March 1811 they had issue a son, Alan Legge Gardner, who became a leading Whig politician, and a daughter, Charlotte Susannah, who married Lord Suffield in 1835. Gardner s address was given as Little Marlow, Buckinghamshire, and a previous address was given as South Audley Street, London.

He was a patron of Captain George Bentham who served with him over several years, and as his flag-lieutenant in 1810.