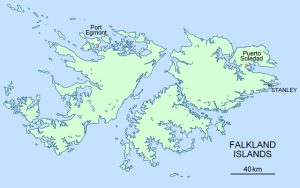 1734-1795. He was born on 5 February 1734 in Bridgetown, Barbados, the second son of Samuel Clayton who died within the year, and of his wife, Thomasine Wittewonge. His father was of Irish descent, and his mother was the heiress to a family that had settled in England from the Netherlands two centuries previously.

Clayton was commissioned lieutenant on 29 November 1756, and from May to November 1759 commanded the tender Barrington in that rank. Whilst serving in the expedition that took Havana after a two-month siege in August 1762 he became the first lieutenant of the Culloden 74, Captain John Barker, which position he retained until April 1763 when she was paid off.

On 1 September 1772 he was appointed the military administrator of Port Egmont on the Falkland Islands, sailing from the Nore on 1 December aboard the exploration vessel Endeavour, Lieutenant James Gordon, which ship had previously been the command of Captain James Cook. After reaching Port Egmont on 28 February 1773 his men began assembling a prefabricated shallop, known as the Penguin, that had been brought out aboard the Endeavour. This vessel was completed and commissioned on 9 April, and thereafter she remained as the solitary man-of-war in those islands with a nominal crew of fifty men, although after a month in a creek she was brought back on land and never launched again. On 23 April 1774 the Endeavour re-appeared after the decision had been taken by the government to abandon the Falkland Islands, and with the Penguin being dis-mantled and re-embarked Clayton and his men set sail on 21 May to arrive at Spithead on 19 September.

He was promoted commander on 1 August 1776, having left Chatham some weeks earlier with the Camilla 20 for North America to exchange into the bomb Strombolo 8, Commander Hon. Charles Phipps, which he eventually did after reaching New York on 29 November. In the meantime he commanded the Camilla when she captured the American privateer Lord Rockingham 16 on 18 September off the mouth of the Delaware after an hour’s engagement that saw her adversary’s two 8-gun consorts run ashore and set on fire in order to prevent capture. The Camilla then embarked on a cruise off Bermuda, taking several prizes and sinking the Salem schooner privateer Independence 6 on 26 October after a four-hour chase.

Clayton subsequently commanded the Strombolo at New York in the summer of 1777, and served in the Philadelphia Campaign from 25 August, where he commanded the boats that carried a Hessian force across the Delaware on 22 October to attack the enemy redoubt known as Fort Mercer. The Strombolo later sailed for Rhode Island in December in the company of the Nonsuch 64, Captain Walter Griffith, and the Somerset 68, Captain George Ourry.

Clayton was posted captain on 23 April 1778, and he commissioned the much-admired captured American frigate Hancock as the Iris 32. In this capacity he commanded a force of flat boats which conveyed a detachment of the Rhode Island garrison to the Hockanum River in Connecticut on 25 May to destroy one hundred and twenty-five enemy vessels preparing for an invasion of Rhode Island. He retained the Iris in North American waters through to November that year when he exchanged with Captain George Keppel into the Ardent 64, and he left New York on 4 April 1779 with Rear-Admiral James Gambier a passenger to enter Portsmouth Dock in May and pay his command off in June. For the rest of that year he remained on half-pay.

Upon returning to active service Clayton commanded the Channel flagship Victory 100 from the beginning of May 1780, one of his first acts being to attend the funeral of Admiral Sir Charles Hardy on 2 May, prior to participating in the June-December campaign with the flag of Admiral Francis Geary until that officer resigned at the end of August. Remaining with the Victory, he flew the flag of Admiral Sir Francis William Drake from the last week of September until the end of December, and that of Vice-Admiral Hyde Parker for a month or so until 16 April 1781.

After leaving the Victory Clayton joined the recommissioned Centurion 50 in April 1781, going out of harbour at Portsmouth for Spithead in June, and leaving St. Helens with the North America convoy on 6 July prior to putting into Torbay. The convoy of one hundred and forty vessels eventually arrived off Sandy Hook in the middle of October and the Centurion then sailed with Rear-Admiral Thomas Graves’ fleet for the Chesapeake to try, unsuccessfully, to relieve Lieutenant-General Lord Cornwallis and the Army at Yorktown. In December he was appointed to the Warwick 50, which vessel returned to England in January with despatches from General Sir Guy Carleton at New York and was paid off towards the end of February at Chatham.

He was not thereafter employed but became a superannuated rear-admiral on 1 June 1795 and died at Peckham in the early part of October, being buried in the family vault at St. Giles Church, Camberwell.

Clayton married Mary Walker at Saviour’s Church, Southwark, on 21 May 1765, and had three sons and six daughters. His eldest son, Thomas Wittewronge Whitewell Clayton, 1766-1806, was posted captain on 26 December 1799 and died when commanding a division of the Irish Sea Fencibles.

He was a religious man who was praised for his kindness and tact when commanding in the Falkland Islands.