1757- 1810. Baptised on 31 January 1757, he was the third son and ninth born of eleven children of Humphrey Minchin and his wife, Clarinda Cuppaidge of Tipperary, Ireland.

Minchin was commissioned lieutenant on 20 October 1779 and posted captain on 18 December 1783. After recommissioning the Resource 28 he sailed for Nova Scotia in May 1784, on which station he served until paying her off in November 1788, having in May of that year sat on the court-martial which passed an erroneously lenient verdict on Captain Isaac Coffin for keeping false musters. During 1791 he had the Narcissus 20, returning to Portsmouth from a cruise in May, and which vessel was paid off in October. 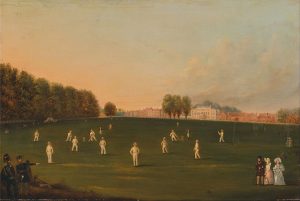 Admiral Minchin did not enjoy a particularly stellar naval career, but he was apparently good at cricket!

In the spring of 1793 he commissioned the new Severn 44 and carried the governor, Lord Dorchester, out to Quebec. The Severn returned to Plymouth on 9 December after a twenty-nine-day passage that saw her obliged to throw fourteen guns over the side, and to cut away her anchors to remain afloat. She later served under the orders of Rear-Admiral John MacBride in the Downs.

Minchin moved to the Hebe 38 in August 1794, which vessel shortly underwent a Plymouth refit, and in commanding her in the Channel during 1795 he joined an attack led by Captain Sir Richard John Strachan of the Diamond 38 on a French convoy in Carteret Bay in May. He was also able to take a fair number of other prizes whilst commanding the Hebe, which earned him a sizeable sum in prize money. During January 1796 he was instructed to fit the Hebe out for the Cape and escort some transports there, but these orders were apparently rescinded shortly afterwards for in the following month the Hebe sailed for the West Indies under Captain Matthew Scott.

Minchin was elected the chief magistrate for North Berwick in 1802 having retired there two years earlier, and he was promoted rear-admiral on 9 November 1805, and vice-admiral on 31 July 1810. He died of ‘water on the chest’ at Edinburgh just over four weeks later on 2 September.

Minchin married Mary Miller, who following his death apparently sought help from the Charity for the relief of Officer’s Widows. The couple had no issue. At the time of his death his address was given as Holywell House, Soberton, Hampshire.

According to Admiral of the Fleet Sir Thomas Byam Martin, Minchin was a large, lumbering inelegant man, and although apparently from a good family he rarely exhibited the social graces expected of an officer and a gentleman. He was a poor seaman and not regarded worthy of his rank by his contemporaries or his crew, who in turn were inevitably regarded as an undisciplined horde. During his time in Nova Scotia he owned and fought playfully with a black bear. It has been stated that despite his physiology he was a good sportsman and a member of the All England cricket team.