1718-86. He was born on 18 May 1718, the only son of Walter Stirling of Sherva in Stirlingshire, and of his wife Janet Ruthven. He was the father of Vice-Admiral Charles Stirling, and the grandfather of Admiral Sir James Stirling.

Stirling received a lieutenant s commission on 18 February 1746 and was promoted commander of the Saltash 14 on 26 February 1757. After returning to Sheerness from the Leeward Islands in October he was employed in operations on the French coast, and was present at Commodore Hon. Augustus Keppel s capture of Gor e in 1758. 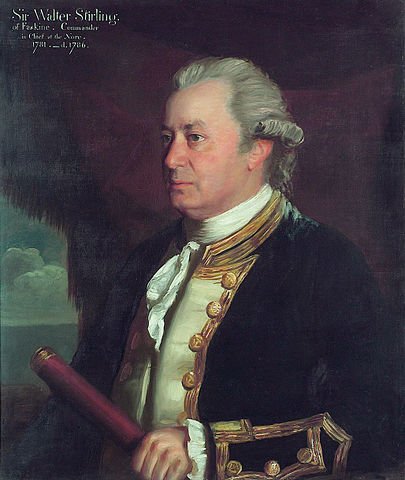 On 10 January 1759 he was posted captain of the Lynn 44, and whilst out on a cruise he captured a small St. Malo privateer, the T m raire. He took a convoy out to Virginia in April 1759 before returning home that November, and after serving at the reduction of Belle-Isle he was appointed to commission the new Lowestoffe 32 in which he destroyed two French prams off Gravelines in May 1762, prior to paying her off within the year.

Recommissioning the Rainbow 44 in the spring of 1763, Stirling sailed for North America shortly afterwards and remained there for the next three years before returning home to pay her off in the autumn of 1766. He then recommissioned the Dunkirk 60 at Portsmouth in early 1769, in which he went out to Jamaica in June. She was in turn the pennant ship to Commodore Arthur Forrest, and following his death in May 1770 the flagship of Commodore George Mackenzie, with Stirling having briefly served as the temporary commander-in-chief prior to the latter officer s arrival. Having exchanged with Captain Stair Douglas he returned to Spithead aboard the Seaford 20 in the spring of 1771, and after retaining that vessel at Sheerness through the summer he joined the Portland 50 at Portsmouth in August, which vessel he took out to the West Indies before sailing home to pay her off in October 1772.

During the early stages of the American Revolutionary War Stirling served in the Impress Service as the regulating captain at the Tower of London, and he took the Gibraltar 80 out to the West Indies in November 1780 as part of the reinforcements commanded by Rear-Admiral Sir Samuel Hood. This was but a short commission, for he returned to England with Admiral Sir George Rodney s despatches announcing the capture of St. Eustatius on 3 February 1781, and he was knighted for this honour.

He was afterwards present in the Duke 98 in Rear-Admiral Richard Kempenfelt s brilliant attack on the Comte de Guichen convoy on 12 December 1781, but he left this vessel before she sailed to join the Leeward Islands fleet in the following month.

From 1783-5 Stirling was the commodore and commander-in-chief at the Nore, flying his broad pennant for a short while aboard the armed ship Greenwich, and then the Prince Edward 60, after which he had no further service. During his time at the Nore he was offered a baronetcy by the King but declined it, although his eldest son, Walter, later claimed the honour for his own support of the Pitt Government.

On 30 October 1753 he married Dorothy Willing, the daughter of a wealthy Philadelphia merchant, who died in Scotland in 1782. The couple had two sons, Sir Walter Stirling, who became an eminent politician and banker, and Vice-Admiral Charles Stirling, whilst their daughter, Anne Dorothea, was the mother of Vice-Admiral Sir James Stirling. His residence was at Faskine, Lanarkshire.

One of Stirling s followers during the early 1770 s was the Philadelphia-born Nicholas Biddle, who in 1778 lost his life when captain of the rebel frigate Randolph in action with the Yarmouth 64.