1735-1809. He was born at Ballyferriter near Tralee, County Kerry, the son of Redmond Moriarty of Ballyneanig.

Having enjoyed a humble and rural education Moriarty entered the navy and was commissioned lieutenant at the grand old age of 41 on 6 July 1776. In the autumn of 1777 he was the third lieutenant of the Experiment 50, Captain Sir James Wallace, serving at New York. It appears that at some point he was taken prisoner by the French, and that in April 1779 he was released from Hispaniola with Acting-Lieutenant Bartholomew James and sent under a flag of truce to Jamaica. 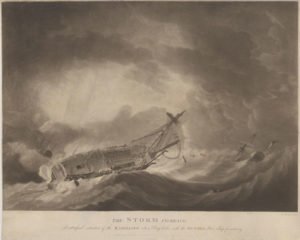 Moriarty was promoted commander on 11 November 1780 and posted captain on 20 May 1781. In June he joined the Hinchingbrooke 28 at Port Royal, Jamaica, two days later he removed to the Princess Royal 90, the flagship on that station of Rear-Admiral Joshua Rowley, and he then commanded the Hinchingbrooke again from July to September. Suffering from illness however, he was twice obliged to resign the command to Captain John Fish. He also briefly commanded the ex-French West-Indiaman Nestor 26, and by 1782 was the flag-captain to Rear-Admiral Rowley on the Ramillies 74.

Towards the end of July the Ramillies sailed from Jamaica with the flag of Rear-Admiral Thomas Graves who was taking the prizes from the Battle of the Saintes back to England, but on 16 September the Ramillies was taken aback and dismasted when the Central Atlantic Hurricane struck the convoy. Five days later she had to be abandoned and blown up, with the crew taking passage in other ships amongst the convoy. Although Moriarty was praised for saving all of his men, he was nevertheless blamed for not notifying Graves of the dangerous weather until it was too late, and probably as a consequence he was never employed at sea again.

During the French Revolutionary War he served for a long period as the regulating captain at Cork, and in due course he was promoted rear-admiral on 1 January 1801 and vice-admiral on 9 November 1805.

Moriarty died at Cork on 17 September 1809, having just returned after three years in England seeking employment.

He married Lydia Hinton of Portsea in 1779 and had numerous children. The eldest of his four daughters, Lydia, married Vice-Admiral Peter John Douglas, and his surviving sons, William, Redmond, and Merion Marshall, all reached the rank of lieutenant in the navy. Three sons predeceased him: Peter, who died of fever in the West Indies whilst a lieutenant, Sylverius in the loss of the Queen Charlotte 100 in 1800, and Martin from effects encountered when fighting a fire aboard the Captain 74 at Plymouth.