1759-1811. Heralding from a family of long-established Thames shipbuilders, he was the eldest of three sons of William Wells, a director of the Royal Hospital at Greenwich, and of his wife, Susanna Neave.

Having joined the navy in 1774, Wells was commissioned lieutenant on 14 January 1780 and promoted commander of the Swallow 14 on 7 February 1781. On 7 July he was despatched by Admiral Sir George Rodney from the Leeward Islands to New York with the advice that reinforcements were to be sent to Chesapeake Bay. Arriving on the 20th after Rear-Admiral Thomas Graves had already set sail for Boston, he was ordered to seek out the admiral but before he could do so his command was attacked by four rebel privateers on 6 September and driven aground on Long Island. This unfortunate occurrence resulted in the loss of vital despatches that would have affected the crucial Battle of Chesapeake Bay on 5 September.

After remaining unemployed throughout the initial years of the peace Wells commissioned the new Iris 32 in June 1790 during the Spanish Armament, before paying her off later that year. 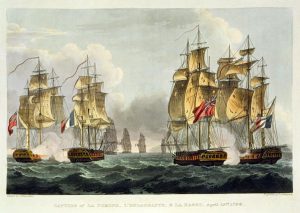 In April 1793 he recomissioned the Concorde 36 for service in the Channel prior to joining the eighteen-pounder Melampus 36 in early 1794 following the incapacitation of Captain Isaac Coffin. On 23 April he was present with Commodore Sir John Borlase Warren s frigate squadron which fell in with the French Engageante 36, Resolue 36, Pomone 44 and Babet 20 off the Channel Islands, the Concorde unsuccessfully chasing the R solue and Engageante and being described as slow in doing so.

Commanding the Defence 74 in succession to Captain James Gambier from October 1794, Wells briefly flew the flag of Rear-Admiral Robert Man and was present at Vice-Admiral William Hotham s action with the French on 13 July 1795, having arrived with Man s reinforcements from England the month before. He thereafter remained in the Mediterranean until 1796, being sent with Rear-Admiral Man to pursue Rear-Admiral Joseph de Richery s squadron when it attacked Newfoundland. Having returned home the Defence was present at the Spithead Mutiny from 16 April 1797, and the ship remained disaffected for some time afterwards with nineteen men being sentenced to death on 18 September. In March 1798 Wells left the Defence.

From the spring of 1799 he commanded the Glory 98 in the Channel, forming part of Rear-Admiral Sir Charles Cotton s reinforcements to the Mediterranean during the Brest fleet s breakout from 25 April, and then returning to the Channel. Captain John Draper held the temporary command of the Glory from June 1801, and she was paid off in March 1802.

From January to April 1804 Wells commanded the Windsor Castle 98, joining the Channel Fleet off Brest, and having transferred to the Glory once more he went ashore upon being promoted rear-admiral on 23 April. His next official duty was as a pallbearer at Vice-Admiral Lord Nelson s funeral on 9 January 1806

Wells was commander-in-chief at the Nore with his flag in the Zealand 64, Captain Robert Fancourt, from May to December 1807, then the Namur 74, Captains Richard Jones and Alexander Shippard, until 1811. During this period a court-martial on 11 August 1809 admonished and reprimanded Captain Keith Maxwell of the Nymphen 36 for disrespect towards Wells.

On 19 December 1784 Wells married Sarah Bridget, the sister of Vice-Admiral Sir Thomas Fremantle, and the family settled at Holmewood in Huntingdonshire. In 1805 he inherited Bickley Hall in Kent upon his father s death, but then sold it on to his brother. In 1807 he had unmarried daughters living with him, whilst a son who was born in 1788, William Wells, served with him aboard the Glory and rose to the rank of captain.

Wells was apparently a difficult man, for when he assumed command of the Defence a number of his predecessor s officers left, and the new captain brought with him many who were considered rustic and uncouth. During his court martial in 1809 Captain Maxwell declared Wells to be cruel and oppressive .