1725-1788. Born at Dalham Hall, near Newmarket in Suffolk of Scottish descent on 19 April 1725, he was the fifth surviving son of Gilbert Affleck, the M.P for Cambridge, and of his wife, Anne Dolben. He was the older brother of Admiral Philip Affleck.

Edmund Affleck was commissioned lieutenant on 2 July 1745, three months after he had passed his examination. On 30 May 1746 he was appointed the first lieutenant of the Plymouth 60, Captain Digby Dent, by Vice-Admiral Thomas Davers at Jamaica, a position he retained until 10 May 1747.

After steady if unspectacular service he was briefly given the acting command of the Advice 50 in controversial circumstances on the Leeward Islands station in 1755 when her previous commander, Commodore Thomas Pye, was ordered home by his successor on the station, Commodore Thomas Frankland. The Advice returned to Portsmouth with Affleck at the helm on 7 May 1756 and entered harbour to be paid off. 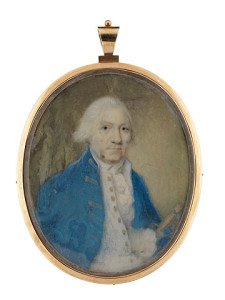 He was promoted commander of the sloop Albany 14 on 5 June 1756, his first task being to take on board impressed seamen from Dublin in July, prior to cruising in protection of the trade in the Irish Sea. The Albany was engaged in convoy duty to London from Portsmouth in October, and she delivered another convoy to Plymouth on 5 November. By the beginning of December, she was back in Dublin on impressment duty before going out days later, and she returned to Dublin with a convoy of five vessels from Yarmouth on 5 February, having lost one of her charges to a French privateer in passage before promptly recapturing her from the French prize crew.

Affleck was posted captain of the sixth-rate Mercury 20 on 23 March 1757, being engaged in convoy duty to Elsinore in June and then cruising in the North Sea. On 7 October, whilst still apparently engaged on convoy duty to the Sound, the Mercury was badly damaged in a gale off the coast of Norway and had to throw all of her guns overboard in order to return safely to the Nore, which she reached towards the end of the month. In January 1758 the Mercury was at Madeira with a convoy bound for the Americas, and in the late spring she was to be found at Lisbon. She appears to have operated out of the Portuguese capital throughout the summer, for in the autumn she entered the Tagus after a cruise before going out to collect the Newfoundland convoy, which she brought into Lisbon during December. On 5 March 1759 she departed Portugal with a convoy for England, and during the voyage home she joined the Experiment 24, Captain John Strachan, in the capture of a rich French Saint-Domingan, which she took with her convoy around to the Downs in April, prior to her being docked at Chatham.

In July 1759 Affleck commissioned the Launceston 44, departing Portsmouth with the Gibraltar convoy on 17 September, and at the beginning of January 1760 his command arrived in the Downs with the homeward-bound Lisbon convoy. On 6 April, she captured the small Île de Bréhat privateer Chevalier de Grossele 2 off Portland, which she carried into Weymouth, and in June she was docked at Portsmouth. Returning to duty, a further capture was the Granville privateer Saint-Antoine 2 on 17 August, which she again took into Weymouth. During December she departed the Downs, and in January 1761 was docked at Portsmouth, prior to sailing out of the harbour at the end of the month to take on board her cannons at Spithead. She then served under the orders of Commodore Hon. Augustus Keppel at the capture of Belleisle during the spring, although before joining that force, she had been dispatched to Madeira to take on wine for the expedition.

By August 1761 the Launceston had returned to Portsmouth, and on 20 October she arrived off Portugal with a convoy from where she returned in early November. During January 1762 she was in Plymouth Sound, and later that month she sent a Spanish vessel into Portsmouth after capturing her off the Isle of Wight. She took a convoy out to New England later in the year, and returned from the Piscataqua River with a convoy of mast-ships and specie to enter Portsmouth in early September. Whilst at the Hampshire port, her lieutenant of marines was court-martialled and cashiered for neglect of duty and defrauding the men. In mid-November, the Launceston sailed for Gibraltar, and she was back at Portsmouth under quarantine by the end of April 1763, from where she sailed for the Downs and thence to be paid off.

Affleck fought with distinction in many battles, not least the Saintes in 1782

Throughout the early years of the peace that followed the end of the Seven Years War Affleck remained unemployed until he reportedly took over his brother’s command, the Argo 28, which returned to Plymouth from the Cape of Good Hope in May 1767 in a most leaky condition, having been under the necessity of throwing her guns overboard to keep afloat. Upon arrival she was taken into dock for major repairs. In October 1770, during the Falkland Islands dispute, he kissed the King’s hand upon his appointment to the guard ship San Antonio 64 at Portsmouth, and although she was reported as ‘rotten’ in December, she remained in commission until arriving at Blackstakes in May, prior to being paid off. Affleck then remained unemployed for the next seven years.

In early 1778 he was appointed to the Bedford 74, sailing with Vice-Admiral Hon. John Byron’s fleet to North America on 9 June, and his was one of six ships which arrived at New York under the command of Rear-Admiral Hyde Parker after storms had severely disrupted the fleet’s passage. After refitting the dismasted Bedford at New York he put to sea in October, but the fleet was again damaged in a storm, and such was the additional damage to the Bedford that it was decided she could not undertake the voyage to the Caribbean in pursuit of the French fleet. She therefore returned to Portsmouth on 25 January 1779 in the company of the Amazon 32, Captain Maximilian Jacobs, whereupon she was ordered around to Plymouth to undergo a further refit and be copper-bottomed.

By June 1779 the Bedford had become attached to Admiral Sir Charles Hardy’s fleet in the Channel, and she was present at the retreat before the allied armada in August. At the end of the year, she sailed with Admiral Sir George Rodney’s fleet to relieve Gibraltar, and she was the first in action with the fleeing Spanish at the Moonlight Battle off Cape St. Vincent on 16 January 1780. During the encounter the Bedford engaged the enemy flagship Princesa 70 for an hour, but despite requesting that the Bienfaisant 64 find another opponent after Captain MacBride’s command had joined the fray, Affleck disengaged and sought another enemy to tackle. The Bedford briefly returned to Spithead on 5 March with Rear-Admiral Hon. Robert Digby’s squadron, having assisted in the capture of the Protée 64 and three storeships on 24 February, and she then took the place of the sickly Marlborough 74, Captain Taylor Penny, to depart in late April for North America under the orders of Rear-Admiral Thomas Graves. Her arrival in July after a two-month passage saw her reinforce the commander-in-chief, Vice-Admiral Marriot Arbuthnot, in Gardiner’s Bay at the end of Long Island.

On 23 January 1781, having been detached under Graves to attempt the interception of a fleet of French transports, the Bedford was dismasted in a gale off the eastern end of Long Island which saw another vessel, the Culloden 74, driven ashore. Affleck demonstrated great skill in re-masting the Bedford with the Culloden’s spars, and by 10 March she was able to sail with Arbuthnot’s squadron in search of the French force under Commodore des Touches. Unfortunately, at the Battle of Cape Henry on 16 March the commander-in-chief’s poor tactics found the Bedford un-engaged at the rear of the line of battle.

During the summer of 1781 Affleck was appointed the commissioner of the navy at New York, where he also acted for the commander-in-chief in his absence. His broad pennant flew initially aboard the Bedford, and when that ship rejoined the fleet under Captain Thomas Graves, he found a berth in any other available vessel as circumstances dictated.

Affleck rejoined the Bedford in the autumn of 1781 with the honorary rank of commodore, and with Graves as his flag captain he sailed in November under the orders of Rear-Admiral Sir Samuel Hood for the Leeward Islands. The Bedford distinguished herself during the repulse of the French fleet at the Battle of St. Kitts on 25 / 26 January 1782, taking a good deal of punishment on behalf of her consorts at the rear of the line, and earning great praise from Hood, who knew that the French had singled the Bedford out for special attention. During the Battle of the Saintes on 12 April, Affleck’s ship was the last in the centre division, but he led Hood’s rear division through the French line and then assisted the Centaur 74 in the capture of the César 74, adding even more gloss to his reputation. As a reward for his endeavours, he was created a baronet on 10 July 1782.

During the remainder of 1782, Affleck continued with his broad pennant aboard the Bedford 74, Captain William Scott, voyaging to North America with the fleet and forming part of Rear-Admiral Sir Samuel Hood’s detachment of a dozen sail of the line that was sent to cruise off Boston in an attempt to intercept part of the French fleet under the Marquis de Vaudreuil. In early 1783 he led a squadron of six sail of the line off Cap François, but with the war coming to an end the most notable event was a duel between his first lieutenant and a masters’ mate in Jamaica at the beginning of March that saw the former mortally wounded. The Bedford and several other vessels eventually returned to Portsmouth on 29 June from Jamaica.

In March 1782 Affleck had been elected the M.P. for Colchester, and taking his seat on 23 January 1784 he provided nominal support to William Pitt’s administration, although he does not appear to have voted and only spoke twice on naval matters. On 10 February 1784 he was promoted rear-admiral, and during the Dutch Armament in the autumn of 1787 he raised his flag at Portsmouth on 16 October aboard the Bedford 74, Captain Robert Man, with expectations that he would take a squadron to the West Indies; however, the fleet was paid off before it could put to sea.

In June 1788 it was reported that he had been requested to attend the Admiralty, as had Vice-Admiral Lord Hood, with expectations that he would be recalled to serve, and in August it was announced that he would be Hood’s replacement as the commander-in-chief at Portsmouth when the former’s term expired. During September he arrived at Bath with his new wife, and by the beginning of October he had raised his flag at Portsmouth aboard the Barfleur 98, Captain John Knight.

Sadly, Affleck’s tenure as the commander-in-chief at Portsmouth was all to brief, for on 19 November 1788 he died of gout in the stomach at his house in Queen Anne’s Street East, London. His remains were interred in the family vault at Dalham in Suffolk.

Affleck firstly married a widow, Esther Creffield, and following her death on 15 December 1787 another widow, Margaret Smithers from New York, on 14 May 1788. He did not have issue from either marriage and was succeeded in his baronetcy by his brother, Gilbert.

Sir Edmund was an esteemed seaman and was renowned for his energy, zeal and decisiveness, being additionally well regarded for the key roles he had fulfilled in three major, successful actions. After being elected as the M.P. for Colchester he became a benefactor of the town, ordering £100 to be given away in early 1784 and donating fifty guineas to the poor in January 1785 for coal and bread. His residence was at Fingringhoe Hall near Colchester in Essex.