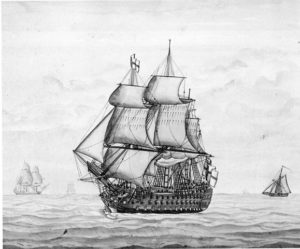 Cowling was commissioned lieutenant on 8 September 1758. Whilst serving in the Leeward Islands in the latter part of 1761 as first lieutenant of the Amazon 24, Captain Basil Keith, he was transferred from his position by Rear-Admiral George Brydges Rodney, much to his captain s displeasure, in order that an officer described as worthless but having a great amount of interest could replace him.

From the summer of 1771 he commanded the schooner Sir Edward Hawke 8 in succession to Lieutenant Anthony Gibbs who had allowed her to be detained without resistance by two Spanish guarda-costa s off Cartagena on the Spanish Main, and had been court-martialled and dismissed the service as a result. Cowling brought her back to Portsmouth to pay her off in September 1772, whilst Gibbs was later restored to the navy on account of his hitherto long un-blemished service.

From June to December 1779 Cowling commanded the captured French privateer Le Comte de Maurepas which had been bought into the navy as the Port Royal 18, serving on the Jamaican station.

He was posted captain on 13 January 1780 and commanded the Princess Royal 98 with the flag of Rear-Admiral Hyde Parker, and then the Ruby 64 as flagship to Vice-Admiral Sir Peter Parker at Jamaica, serving in Captain Hon William Cornwallis action in the Windward Passage during 20-22 March and his retreat from a larger French force on 20 June. During August Captain Manley Dixon briefly deputised for him.

In 1781-2 Cowling had the Ramillies 74 at Jamaica, being in company with the Ulysses 44, Captain Thomas Dumaresq, when they captured the French privateer Franklin 28 on 5 January 1781. He returned home aboard the Sandwich 90 with the flag of Vice-Admiral Sir Peter Parker in the summer of 1782 and left her at Blackstakes.

Cowling died in Kingston, Surrey, on 7 April 1792, having long suffered from severe gout, and was buried in nearby Long Ditton, having apparently seen the vast majority of his service in the West Indies.

He left an illegitimate son, John Cowling Barton, by his housekeeper, Elizabeth Barton.

Shortly after Cowling’s death his cousin penned an astonishing letter to Lady Parker thanking her for her influence in securing Cowling’s various appointments in the West Indies but claiming that his long suffering from gout was because he was of a wicked mind, and that having died he must have gone to Hell. The cousin’s vitriol, whilst also mentioning Cowling’s ingratitude to Lady Parker, was possibly occasioned by the fact that Cowling’s will did not benefit him.

My thanks to Martin Davis for allowing me sight of Cowling’s cousin’s letter to Lady Parker.