1776-1840. He was born on 12 November 1776, the third son of General William Kerr, 5th Marquis of Lothian, and of his wife, Elizabeth Fortescue of Dromiskin, the daughter of the M.P. Chichester Fortescue. He was a first cousin of the Duke of Wellington.

Kerr joined the service in May 1790 aboard the Canada 74, Captain Lord Hugh Conway, serving in the Channel fleet in the course of the Spanish Armament. During the following year he served aboard the Lion 64, Captain Hon. Seymour Finch, and also saw duty on the sloop Bonetta 16, Commander William Elliot. In 1792 he was aboard the sloop Shark, Captain Hon. Arthur Kaye Legge, employed in the Channel, and from August he served as a midshipman aboard the Lion 64, Captain Erasmus Gower, which set out for China with Lord Macartney s embassy in the following month.

Two months after the Lion s arrival home Kerr was promoted lieutenant on 1 November 1794 and appointed to the newly commissioned Pylades 16, Commander Thomas Twysden, but before he could join her she was wrecked in the Shetlands on the 26th, so instead he was taken aboard the recommissioned Triumph 74, once more with Captain Gower. In May 1795 he joined the Sans Pareil 80, Captain William Browell, which flew the flag of Rear-Admiral Lord Hugh Seymour at the Battle of Lorient on 23 June.

Promoted commander in September 1796, Kerr was appointed to the Fortune 12 in the Mediterranean fleet, and the day after the Battle of Cape St. Vincent on 17 February 1797 he was ordered to assume command of the prize San Ysidro 74 by Admiral Sir John Jervis. Although he was posted captain of the Danae 32 on 7 March he appears to have briefly commanded the Bonne Citoyenne 20 before he took passage home from Lisbon aboard the packet King George in April. 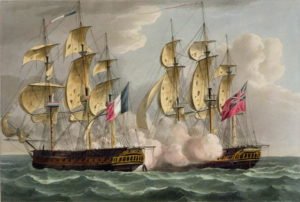 Lord Kerr commanded the Fisgard, depicted here on the right, during the early years of the Napoleonic War.

On 17 October, he joined the Cormorant 20, and during August 1798 his command was at Spithead where the crew of her launch had to be rescued after she overset. In September the Cormorant formed part of the escort to the East Indies and Lisbon convoy under the command of Captain Robert Carthew Reynolds of the Pomone 40, which had to resort to subterfuge to prevent an attack from an Ireland-bound French force that was defeated by Commodore Sir John Borlase Warren on 12 October. Rejoining the fleet in the Mediterranean, Kerr was with Commodore Sir John Duckworth at the capture of Minorca on 15 November. He subsequently captured the Spanish packet Valiente 12 off Malaga on 2 January 1799, helped the Centaur 74, Captain John Markham, drive the Spanish frigate Guadeloupe 34 ashore on 16 March, and captured the sloop Vincejo 26 three days later. Kerr left the Cormorant in the summer to return home and marry. He then took up residence at Lavant Lodge near Chichester.

On 15 July 1803 he was appointed to the Fisgard 38, recommissioning her and leaving Plymouth on 20 September. In December she went ashore near Lymington whilst escorting the Quebec convoy up the Channel, but she was refloated two days later. During February 1804 she escorted the West Indies trade out of the Channel after putting into Falmouth because of contrary winds, and in July sailed from Portsmouth with the Lisbon and Mediterranean trade. Whilst patrolling off Cape St. Maria Kerr learned of the Spanish declaration of war, and promptly took prizes to the value of 14,000 in addition to the French letter of marque Tigre 12, formerly the Liverpool vessel Angola, in December.

In early 1805, when employed in the inshore squadron off Toulon, Kerr discovered the French fleet coming through the Gut of Gibraltar and immediately sent word to Vice-Admiral Sir John Orde off St. Maria. It was this report that gave Lord Barham, the first lord of the Admiralty, the initial advice that the Franco / Spanish fleet was at sea. Kerr left the Fisgard in September and was not re-employed.

He was promoted rear-admiral on 19 July 1821, vice-admiral on 10 January 1837, and died on 9 September 1840 at his residence in Henrietta Street, Cavendish Square, London.

Kerr married Charlotte Macdonnell, the third daughter of the Marquis of Antrim on 18 July 1799, and of their fifteen children three sons and six daughters survived infancy. His wife succeeded her elder sister as the Countess of Antrim in 1834. Four of Kerr s sons predeceased him whilst his youngest son, Hon. Mark Kerr, was a captain in the Navy and became the 5th Earl of Antrim in succession to the fifth eldest son. He was a lifelong friend of Admiral John Markham.