1726-1813. He was born on 14 October 1726 at Leith, the second son of Robert Middleton, a customs collector in Linlithgowshire, and of Helen, daughter of Captain Charles Dundas and a cousin of the future Lord Melville. He became the uncle by marriage of Admiral Lord Gambier, who as a boy was brought up in Middleton s household.

Middleton first saw employment at sea in the merchant service between 1738 and 1741. Having joined the Navy at the start of the latter year he served as a cabin servant aboard the Sandwich 90, Captain Samuel Mead, transferring in the summer with that officer to the Duke 90, before moving later in the year to the Flamborough 20, Captain Joseph Hamar, going out to North America. On 5 November 1745 he was promoted lieutenant of the Chesterfield 40, Captains William Gordon and O Brien Dudley, and he remained employed until the peace of 1748 when he went on half pay.

In 1754 he joined the Portsmouth guardship Anson 60, Captain Charles Holmes, and after the outbreak of hostilities he served on the same vessel under Captain Robert Man in North America and in the Leeward Islands.

Middleton was promoted commander of the recently purchased Speaker 10 on 27 February 1757, which he commissioned for the navy at Barbados, but he simultaneously had the Blandford 20 in an acting capacity on that station. In the spring he captured the prolific 10-gun French privateer schooner Victoire, and after re-taking an English snow he deposited both at St. Kitts and promptly captured another troublesome 10-gun privateer whilst proceeding to Antigua. Such was his record in command of the two vessels that the Barbados legislators ordered him a gold-hilted sword from England.

The Admiralty rewarded Middleton for his services by posting him captain on 22 May 1758, and he was appointed to the Arundel 24, which at the time was recommissioning in England. In the meantime, from July, he commanded the Barbadoes 14 in the Leeward Islands, which vessel he managed to re-float after she had driven aground during a hurricane at Barbados on 23 August. He then joined the Arundel when she arrived under the command of a lieutenant in the Leeward Islands in October. During November he fell in with a fever-ridden Bristol slaver, the Swift, and he and his surgeon, James Ramsey, did much to alleviate the suffering of the slaves. This encounter would have a profound effect on both men, and after leaving the service and taking holy orders Ramsey dedicated his life to the abolition of slavery, helped in no small measure by Middleton and his wife. 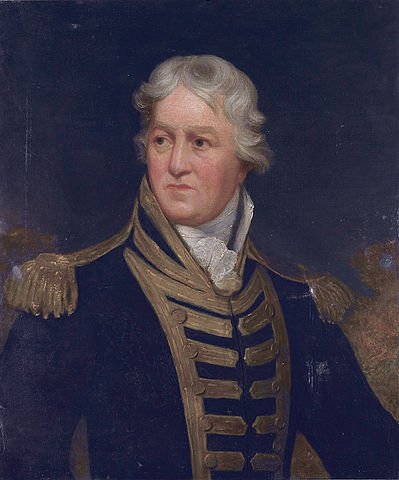 Having joined the Emerald 28 in July 1760, Middleton cruised in the Leeward Islands through to the following year with continuing success against the enemy, his captures including the Conqu rant and Parfait on 20 November 1760. After being sent home with a convoy, much to the disappointment of the authorities in St. Kitts who had greatly valued his services, the Emerald was paid off in October 1761 and broken up the following month. It was subsequently reported that during his time in the Leeward Islands Middleton had taken over fifty prizes of which at least thirteen were privateers, three letters of marque, twenty-five merchantmen and nine re-captured British vessels.

After returning to England Middleton commanded the far from inspiring Adventure 32 from February 1762 on the home station and off Havre until the peace, taking the Dunkirk-based privateer snow Sequier 12 on 18 March, the Bayonne-based Art mise 8 on 14 December and, in company with the Renown 30, Captain Hon. Frederick Maitland, the Domesville 8. He then spent the next twelve years on half-pay, farming the land around Teston in Kent where his wife and her friend, Elizabeth Bouverie, had set up home.

In March 1775 Middleton was appointed to the guardship Ardent 64 at Chatham, which vessel entered Sheerness dock in September, and in November 1776 he was ordered to commission the new Prince George 90, going round to Spithead from the Downs in the spring. He had the Royal Oak 74 from the beginning of 1778 until it was commandeered by Rear-Admiral Hyde Parker for his flagship in April, whereupon he removed to the new Jupiter 50.

Middleton resigned his commission in August 1778 to become comptroller of the navy, being a somewhat surprising choice for this role as his career had not been particularly noteworthy to date. During the Channel fleet retreat of August 1779 he exerted some influence over Admiral Sir Charles Hardy by urging him to remain cautious, although this was a path the old officer had little difficulty in following anyway, and similarly he had some say in the strategy of the fleet following the change of administration in 1782. He retained the position of comptroller until March 1790 when he submitted his resignation in protest at the government s failure to overhaul the administration of the Navy, being outraged at the lack of progress in curtailing waste and corruption. His tenure was nevertheless judged to have been a success and he was credited with leaving behind him a strong base for the future naval supremacy.

In the meantime on 23 October 1781 he had been created a baronet, in 1784 had been elected M.P. for Rochester in the government interest, and had been promoted rear-admiral on 24 September 1787 as a beneficiary of the dispute over the early retirement of admirals which resulted in Lord Howe s resignation on 16 July 1788. He was further advanced to the rank of vice-admiral on 1 February 1793 and admiral on 1 June 1795. From 1794-5 he returned to service as a lord commissioner of the Admiralty, but although he was appointed first naval lord in May 1795 after his own lobbying of Henry Dundas, the Secretary of War, he soon resigned this post in protest at the appointment of a junior admiral, Rear-Admiral Hugh Cloberry Christian, to the Leeward Islands command in October. 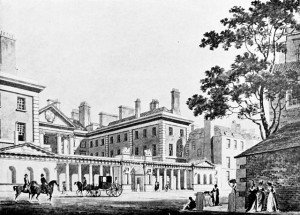 In January 1805 William Pitt appointed Middleton to chair the committee of a board of naval enquiry, replacing that previously set up by Admiral Lord St. Vincent, and on the fall of his kinsman, Lord Melville, he became the first lord of the Admiralty on 30 April at the age of 79. At the same time he was elevated to the peerage as Baron Barham of Barham Court, Teston. King George was known to be aghast at his appointment, the cabinet was dismayed, St. Vincent s supporters denigrated both his age and the fact that he had never commanded a fleet, let alone a ship of the line in battle, and only Napoleon seemed to welcome the appointment. Nevertheless, in being related to Melville Barham s elevation was seen as a method of reducing the heavy blow which had been inflicted on the outgoing first lord who in time would face impeachment for his conduct in office. It was also said by some that the appointment owed much to Pitt s requirement for allies in the government, as Barham brought the supporters of William Wilberforce with him.

With Captain Lord Garlies serving as one of his junior lords, Barham was charged with rebuilding the fleet in the wake of Earl St. Vincent’s reforms and economy drives, and in dedicating himself to this task he only attended cabinet when naval matters were discussed. His plan to deal with any French invasion flotilla was simple and cheap – one hundred large merchantmen would be equipped with carronades and employed to attack it as it attempted to cross the Channel. His strategic ordering of Vice-Admiral Sir Robert Calder to intercept Admiral Villeneuve following that officer s breakout from Toulon on 29 March 1805 was admired by many, although his board had previously discussed this solution, and the management of the whole Trafalgar campaign reflected the greatest credit upon him.

In February 1806 he resigned his position on the fall of the government, thirty-two French sail of the line having been captured during his most outstanding term of office, and he died at his residence of Barham Court, Teston, Kent, on 17 June 1813.

On 12 December 1761 he married Margaret Gambier, a niece of his first captain, Samuel Mead, and sister of the elder Admiral James Gambier. The match was not before her father had forbade the union, she had eloped to join her friend, Elizabeth Bouverie, in Kent and been disinherited. Lady Middleton died on 10 October 1792 having had issue one daughter, Diana who became Baroness Barham on the admiral s death. Lady Middleton was renowned for her public-spirited works, her intransigent opposition to the slave trade and her friendship with Samuel Johnson.

A friend and relative by marriage to Pitt the Younger, Middleton nevertheless disliked politics, perhaps having been used by Lord Germain to undermine the Lord Sandwich, the first lord of the admiralty, during the American War of Revolution. He was of a virulent and puritanical religious persuasion that was the backbone of his character, much disliked swearing although he often used harsh language himself, was evangelical, and disdained the slave trade. With Lady Middleton he moved in the first rank of abolitionists, doing much to persuade William Wilberforce to lead the campaign in parliament against slavery.

An intolerant, opinionated man, reputations and friendships counted for little with Middleton, and prior to returning Vice-Admiral Lord Nelson to the command of the Mediterranean fleet in 1805 he demanded to scour the Victory s journals to satisfy himself of the great admiral s conduct during the chase of Villeneuve to the West Indies. The Earl of St. Vincent typically described him as a ‘Scottish pack-horse’, although more reasonable judges considered him to be a very able administrator. A strategist of the highest ability and a great delegator, he was credited with being a hard worker and a master of detail. As comptroller of the navy during Viscount Hon. Augustus Keppel s tenure as first lord of the admiralty he had a poor relationship with the great admiral who despised him, and was happy to deal behind his back. Similarly Earl Howe found Middleton impossible to work with, and he was variously described as being disloyal, a meddler, and an intriguer, it little helping that Middleton enjoyed far more influence with the prime minster, William Pitt, than did Howe. His intention appeared to be to control everything in line with his insuperable opinion that he knew best. It said much that he was a correspondent of Walter Young, Admiral Lord Rodney s flag captain, for both men were prone to much criticism of this officer.

Middleton was tough and a man of action, but in his younger days he had not been a particularly model officer, being renowned for using any excuse to obtain leave from his peacetime guardship, including the novel one that his commander-in-chief was insane. His command of the Arundel had been marked by a singular failure to account for his whereabouts, and at one time he was discovered attempting to promote his purser on false pretences. He was not averse to delivering a swift boot to the rear of any warrant officer or seaman who erred, on one occasion kicking a complainant out of the wardroom and threatening to run him through.

An advocate of improving ship design who was largely responsible for ensuring the coppering of ship s bottoms during his time as comptroller, Middleton was both a keen patron of ancient music and a leading agriculturist, earning much acclaim from his farming in Kent.