The promotion of captains to flag rank had never been a cut and dried process, despite the general assumption that the achievement of the rank of post captain entitled one to join the list of officers who would in strict succession reach the rank of admiral. Only since the early 1770 s had it become the practice to promote captains in this fashion, but there were still some officers who simply became superannuated rear-admirals when they reached the top of the captain s list, and there were others who for various reasons were never promoted at all.

One such officer was Captain David Brodie, who had lost an arm in action during the 1740 s but upon considering himself sufficiently recovered had sought but failed to obtain employment in the Seven Years War and the American Revolutionary War. In the ordinary course of events he would have been raised to flag rank in 1777 had he not been passed over. On 5 March 1787 the Whig opposition in the House of Commons took up his cause when Sir Matthew White Ridley, the M.P for Newcastle-Upon-Tyne, raised a motion requesting that a humble address be presented to the king, asking that Captain Brodie be restored to his rightful rank. He was supported in his motion by, amongst other members, the naval contingent of Rear-Admiral Sir Edmund Affleck, Captain John MacBride, Captain Sir George Collier, and most stridently Captain Sir John Jervis. To the contrary Captain George Bowyer was amongst other members who disagreed with the wording of the motion, and it eventually failed by one hundred votes to eighty-three. 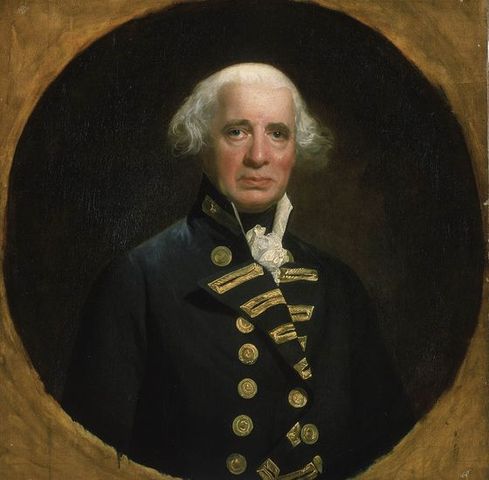 The matter may well have rested there and then, but with the Dutch Armament imminent in September 1787 the first lord of the Admiralty, Admiral Lord Howe, decided to address what he considered to be the inferior qualities of the flag officer corps by authorising a huge general promotion which would retire forty officers at the top of the list whom he considered to be of little worth, and raise to flag rank sixteen captains of younger age and ability. Included in the promotion were such capable men as John Elliot, William Hotham, Sir Richard King, Sir John Jervis and Adam Duncan, whilst collateral beneficiaries of the action were the exchequer and the government as a whole, for there were many cost savings to be had in pensioning off officers.

Suffice to say the superannuation of so many officers encouraged the Whigs to have another go at challenging the whole contentious issue of naval promotions, and despite the fact that Captain Brodie had died in Bath during the interceding June, Lord Rawdon raised the matter once more in the House of Lords on 20 February 1788, being seconded by Admiral Lord Hawke. Lord Howe then spoke in defence of his policy, stating that the command of the fleet should devolve upon those men who were fit enough in mind and body to fulfil such an exacting task. He added that he had intended no slur on those officers who had fought so bravely as captains, but contested the assumption that an able captain made an able admiral. He refused to discuss individual cases, but stated that he had addressed the issue with the strictest impartiality. The fact that one of the beneficiaries was the arch Whig Captain Sir John Jervis, who had so explicitly spoken out for Captain Brodie in March of the previous year, clearly demonstrated the lack of any political influence in Howe s decision, and even his erstwhile enemy Lord Sandwich, a previous lord of the Admiralty, spoke against the Whig motion. At the end of the debate the motion was considered defeated without the need to pass through the lobbies.

The next day John Pollexfen Bastard, the M.P for Devonshire, brought a motion in the House of Commons arguing the case for the passed-over captains, and speaking particularly in favour of two officers, George Balfour and Samuel Thompson, who had been superannuated. Captains Sir George Collier and John MacBride made speeches supporting him, as did Captain Hon. Peregrine Bertie, who delivered the one and only speech he made during his sixteen years as an M.P. The motion was opposed by the prime minister, William Pitt, whilst Vice-Admiral Lord Hood and Captain Lord Mulgrave also supported Lord Howe s position, although they clearly felt that some officers had been dealt an unfair hand. At the end of the debate Mr Bastard agreed to withdraw his motion but warned that he would raise the matter again in some other form.

Realising that his argument was gaining momentum, on 7 March Mr Bastard gave notice that he would present a petition to parliament from those captains who had been overlooked, and having amended the wording of his previous motion he tried once more on 18 April, adding the names of Samuel Uvedale, Thomas Shirley, John Bray and John Laforey to those previously mentioned as being worthy of promotion. There may have been a case for Laforey not being advanced as he had spent some time in a civilian position, but then so too had Sir Charles Middleton who had been promoted. Mr Bastard also complained that one officer had been passed over because he had been employed in the Impress Service. Thereafter the leading Whig, Charles James Fox, rose to his feet and pointed out that one of the officers promoted by Howe, Sir John Lindsay, was known to be so ill that he could not possibly return to sea.

The wording of the motion was That it was the opinion of this House that the Board of Admiralty, in the late naval promotions, have passed by many officers of great merit and approved services, who were not excluded from the flag by orders of Council . When the division on the motion took place the administration carried the vote with but a minimal majority of seventeen, one hundred and thirty-three members supporting the motion but one hundred and fifty opposing it. Bolstered by what he deemed to be a shifting position in his favour, Mr Bastard announced that he would raise the matter again in another form.

Lord Howe s five-year tenure at the Admiralty, and in particular his relationship with the prime minister and the rest of the cabinet, had not been a happy one, nor had he been on good terms with the influential comptroller at the Navy Board, Captain Middleton, who in turn was a favourite confidant of Pitt s. Lacking political nous, and being somewhat intractable, reactionary and dour, the first lord had failed to make allies within the government, and whilst his superannuation of so many captains might have appeared judicious to those who considered the navy over-populated by under-qualified senior officers, at a time when the navy and parliament were greatly intertwined he evidently could no longer count on the support of members whose friends in the service had been cast aside.

It was thus little surprise that Howe s position began to appear more untenable as a result of the dispute over his promotions, and as he preferred not to offer further justification of his action, and as he was an honourable man, he decided that he could not remain a part of the government without enjoying its full confidence. Accordingly on 12 July he resigned his position, as did one of his junior lords, Charles Brett. Shortly afterwards the King, who had long been his admirer, rewarded Howe for his service by creating him an earl, this being a title that was unprecedented for an officer who until that date had not won a major battle at sea.

In an effort to establish more cohesion between the Admiralty and the government Pitt s older brother, John, the 2nd Earl of Chatham, was subsequently appointed Howe s successor, whilst the requisite naval experience was obtained by appointing Vice-Admiral Lord Hood and Admiral Sir Peter Parker as junior lords.