Carkett entered the navy in 1734 as an able seaman aboard the Exeter 60, Captain John Yeo, and after serving for the next four years aboard the sloop Grampus 6, Commander George Cundett, and bomb Alderney 8, Commander James Scott, he was promoted midshipman of the Plymouth 60, Captain Sir Roger Butler. With this vessel he served a further five years in the Mediterranean, towards the end of which period the command of the Plymouth was held by Captains Charles Watson and George Brydges Rodney.

On 18 July 1743 he passed for lieutenant, and he received his commission on 26 February 1745 during a two-year cruise to the East Indies aboard the Deptford 60, Captains Curtis Barnett and John Moore. He afterwards served with the frigate Surprise 24, Captain James Webb, until 1747. 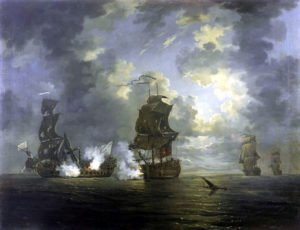 In March 1755 Carkett joined the Monmouth 70, Captains Washington Shirley, Henry Harrison, and Alexander Innes, which vessel was employed in the Channel before moving to the Mediterranean two years later under the command of Captain Arthur Gardiner. On 28 February 1758 the Monmouth chased and over four hours engaged the Foudroyant 80 off Toulon, one hour into which action Carkett assumed command when his captain fell mortally wounded. The Swiftsure 70, Captain Thomas Stanhope, arrived on the scene to force the French ship s surrender, but it was to Carkett that the French captain insisted on giving his sword, and he was promoted to command the prize. The capture of the Foudroyant was a celebrated victory and not surprisingly, on 12 March, Carkett was posted captain, having in the meantime joined the Revenge 70 in which he returned to England.

He remained in the Downs until February 1759 then joined the frigate Hussar 28, serving in home waters and from the spring of 1760 in the West Indies. This frigate captured the privateer Fourmi on 14 December, and was present at the destruction of another four privateers off Cape Tiburon in the spring of 1762. Unfortunately, the Hussar ran aground on a reef off St. Domingo on 23 May and her crew became prisoners of war. She was later salvaged by the French who commissioned her for their service. In June Carkett and the other officers sailed under parole to England, and in December he was officially exchanged and was thus at liberty to rejoin the war. He commissioned the Active 36 in August of the following year, going out to Jamaica in October, and she was eventually paid off at Chatham in June 1767.

In July 1769 Carkett commissioned the Lowestoft 32 at Sheerness, again going out to Jamaica in October where he spent most of his time officially protecting the colony at Pensacola, as well as acting as commander-in-chief in 1770. Generally however it was a quiet posting, allowing him to garden to his heart s content. After returning to England in May 1773 the Lowestoft was paid off and he saw no further employment for almost five years.

In November 1778 he took command of the Stirling Castle 64 and sailed to the West Indies with Commodore Joshua Rowley in the following month. He fought at the inconclusive Battle of Grenada on 6 July 1779, and later assisted Rear-Admiral Rowley to take the French frigates Blanche 32, Fortun e 32 and Elise 28 after Rear-Admiral Hyde Parker s engagement with the French on 18 December.

The Stirling Castle led the line at the Battle of Martinique on 17 April 1780, losing four men killed and thirty-four wounded, but where Carkett failed to understand Admiral Sir George Rodney s confused instructions and forged ahead to attack the enemy s van. This move was contrary to the commander-in-chief s intention, which had been for him to concentrate on his direct opponent in the centre. Initially Rodney vented his wrath on his subordinate admirals, but when Carkett not only learned of Rodney s detrimental and less publicised account of the Stirling Castle s part in the battle, but also received a letter from the commander-in-chief advising that he had informed the Admiralty of Carkett s failure to properly obey his signals, he wrote to the Admiralty putting his side of the argument. Rodney responded with a direct letter confirming his criticism, embellishing it with the opinion that Carkett had proved to be the second worst captain in the fleet, and accusing him, as the oldest captain present, of having set a bad example to his juniors.

Sadly Carkett never lived to obtain vindication, for having remained with the fleet for the remainder of the Leeward Islands campaign from May to July, during which he fought in the skirmishes with the French in the former month he then repaired to Jamaica with Rear-Admiral Rowley s squadron. It was on this station that the Stirling Castle was wrecked in the Great Hurricanes of October, going down on the Silver Keys off Cape Fran ois with the loss of all hands bar one midshipman and four seamen

Carkett had at least one son, Robert, who attended Eton.

He was viewed a rugged and brave officer, but one who had little knowledge of fleet actions, nor any great imagination, and he was stigmatised as typical of an officer promoted from the lower deck.