The Leeward Islands fleet under the temporary command of Rear-Admiral Sir Hyde Parker was at anchor in Gros Islet Bay, St. Lucia on the morning of 18 December when a signal was received between 8 and 9 a.m. from the Preston 50, Captain Samuel Uppleby. This vessel, patrolling between St. Lucia and the French base at Martinique some thirty miles away, was advising that a number of unknown ships had been discovered to windward.

The British fleet was barely in any state to launch an instant chase of the presumed enemy, as most of the captains were sitting on a court-martial, a large number of men were ashore wooding and watering, and several ships were under repair, some even heeled over. Nevertheless, with a haste and dexterity that astonished their rear-admiral, five sail of the line and a 50-gun ship were able to slip their cables and put to sea, and soon they were beating up to windward to intercept what proved to be a French convoy of twenty six supply ships under the escort of a frigate.

The action that followed was thoroughly one-sided, and by 4 p.m. nine vessels from the convoy had been captured and another four forced ashore on Martinique to be burned by men from the British ships that afternoon or the next morning. Ahead of the British fleet the frigate Boreas 28 managed to bring the French escorting frigate to action, but before she could gain an ascendancy the French commander-in-chief in Fort Royal, Admiral Toussaint Guillaume la Motte-Picquet, slipped the cable of his flagship, the Annibal 74, and with the Vengeur 64 and R fl chi 64 in company came out to not only drive the Boreas off, but to secure the remainder of the convoy. 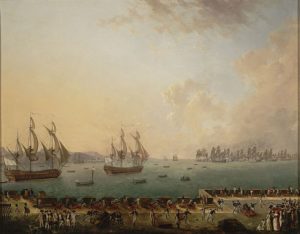 A French view of the action

Rich pickings though the convoy had promised, the capture of three French sail of the line was a far more rewarding prospect, and beating up to windward ahead of her consorts, the Conqueror 74, Captain Walter Griffith, began engaging the Annibal within the hour. Soon she also found herself engaged with the other two ships of La Motte-Picquet s force. At about sunset the Albion 74, Captain George Bowyer, managed to get up to offer support to the Conqueror, but by now the two ships were nearing shoal water and within the range of the French batteries, so Parker had little option but to recall them at 6.45. Sadly, as the action culminated, Captain Griffith was struck down and killed by an enemy broadside, being one of four deaths on his command.

Displaying the chivalry of the times, the apparently intemperate and stodgy Parker later wrote a congratulatory letter to Admiral La-Motte Picquet, declaring his admiration for his worthy conduct. Yet the excitement was not yet over, for in the process of returning to Gros Islet Bay on the evening of 20 December the temporary commander-in-chief received a communication from Major-General Sir Henry Calder to the effect that some ships had been spotted from the heights of the island that afternoon, and were sailing away to the north. These vessels would prove to be three French frigates.

In order to intercept this new force Rear-Admiral Joshua Rowley with his flag in the Suffolk 74 was detached with three other sail of the line, the Magnificent 74, Captain John Elphinstone, Vengeance 74, Captain William Truscott, and Stirling Castle 64, Captain Robert Carkett. At 8 a.m. on 21 December the strange vessels were seen from the Suffolk s masthead and the chase was on.

Unfortunately for the French, their frigates were poorly manned and in need of repair, and as such they were unable to make good their escape from the sail of the line, as would normally have been the case. The Blanche 32, Captain de La Galissoni re, struck to the Magnificent after but a few shot that evening, the Fortun e 32, Captain Chevalier de Marigny, was overhauled by the Suffolk on the morning of the 22nd despite throwing her cannon overboard, and on the same morning the Elise 28, Captain Fonteneau, struck to the Magnificent and Stirling Castle. Of these vessels the Fortun e was bought into the navy.

The common threat to both British and French convoys in the region was illustrated shortly afterwards when Rear-Admiral Parker had to act defensively in rushing out under the noses of twenty-six French sail of the line to bring home a convoy from Barbados, consisting of 3,000 troops under the command of Major-General John Vaughan. Only later in 1780 would the two fleets actually meet in battle, but by then Parker s temporary command of the Leeward Islands fleet had ended with the arrival of the eminent if controversial Admiral Sir George Rodney.