1722-85. He was baptised in London, the only child of John Elphinstone and of his wife Anne Williams. The family originated from Lopness in the Orkney Islands.

Having been commissioned lieutenant on 23 August 1746, Elphinstone was serving in this rank aboard the Royal Sovereign, 100, Captain William Boys, when in the early part of 1757 he was appointed to the buss London, engaged in conveying mail to the Netherlands.

He was promoted commander of the recently purchased fireship Salamander on 5 May 1757 and remained with her through the following year, initially going out to the Mediterranean and then serving under Commodore Hon. Richard Howe in his campaign against the French Channel ports during the summer of 1758. When superintending the embarkation following the attack on St. Cas he was captured with three other captains, Joshua Rowley, Jervis Maplesden and William Paston.

After his release Elphinstone was posted captain into the Eurus 20 on 1 February 1759, taking her out to North America later that month and serving at the capture of Quebec. In April 1760 he moved to the Richmond 32 in succession to the late Captain George Hamilton, and he brought her back to England from the St. Lawrence that June. On 24 January 1761 the Richmond brought the French F licit 32 to action off The Hague after an eleven hour chase, securing her surrender following a bitter fight that saw the enemy suffer a hundred casualties and both vessels drive ashore at Scheveningen. The Richmond was refloated whilst the French vessel was destroyed. Later in the year Elphinstone captured the French privateers Aucheur on 11 July, Epervier on 25 November, and B arnoise 14 off Bayonne on 24 January 1762.

In February 1762 the Richmond sailed out to the West Indies with orders for Rear-Admiral George Rodney. After acting as the superintendent of the transport service during the siege of Havana, Elphinstone was given command of the prize ship Infanta 70 which he brought back to Plymouth at the peace, arriving in May 1763.

At the end of 1763 he commissioned the guard-ship Firm 60 at Plymouth, retaining her for three years, and he briefly commanded the Pearl 32 in 1768 before paying off in December at Plymouth. 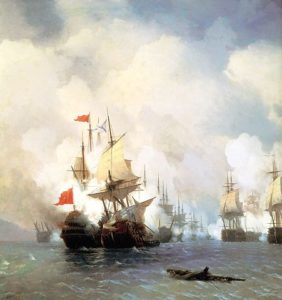 Elphinstone was one of a handful of British officers who joined the Russian service of Catherine the Great in the summer of 1769, and he was employed in the rank of rear-admiral. He also took his sons John and Samuel with him. In 1770 he commanded a squadron that sailed from the Baltic to the Mediterranean to join operations against the Turks. Whilst his ships were re-victaulling at Portsmouth he fell foul of Vice-Admiral Francis Geary, who ordered him to discontinue the practice of using signal guns to set the watch in Portsmouth Harbour.

Upon arriving off Greece at the end of May Elphinstone attempted to bring about an engagement with a superior Turkish squadron in the Gulf of Naupila, but, although he initially forced the enemy to retreat and then attempted to attack them under the Nauplia batteries, his officers refused to continue the action and he was obliged to sail away. He participated in the defeat of a Turkish fleet in Chesme Bay on 5 July even though his preferred mode of attack was rejected, and he was later given undue credit for his efforts to the denigration of his contemporaries which included his fellow-Scots born Admiral Samuel Greig.

During his time in their service Elphinstone regularly fell out over the limits of his authority with the senior Russian officers and in particular the commander-in-chief of the Mediterranean fleet, Count Aleksei Orlov. He was sent back to Russia on charges of negligence when his flagship Svyatoslav 80 was wrecked on a sandbank at the siege of Pelari, and he chose to wear a British rather than a Russian uniform when he appeared before the Empress. In short order he was obliged to abandon her service in July 1771, and subsequent Russian and British accounts of his time in Catherine s navy were extremely contradictory.

He commissioned the Magnificent 74 in the summer of 1778, sailing for the Leeward Islands with Commodore Joshua Rowley in December, and on 6 July 1779 he fought at the Battle of Grenada. Following Rear-Admiral Hyde Parker s partial engagement with the French on 18 December he assisted Rear-Admiral Rowley in the capture of three French frigates from St. Lucia, with the Magnificent taking the Blanche 36. On 17 April 1780 the Magnificent fought in the Battle of Martinique, where she was stationed at the rear of the line and suffered only one man killed and ten wounded, and shwe was present in the subsequent Leeward Islands campaign, losing five men killed and twenty-three wounded in the fleet skirmishes during May. At the end of the year Elphinstone returned to England with the Jamaica convoy and the Magnificent was paid off and ultimately broken up. During the latter part of 1782 he commissioned the Atlas 90 but hostilities ceased before he could take her to sea and she was paid off in April 1783.

He married Amelia Warburton on 23 October 1750 and had six sons including John, a post captain, who died in 1801, Samuel William, who died as a captain in the Russian service in 1788, Thomas, who reached the same rank in the navy before his death in 1821, Robert-Phillip, who died as a post captain in 1822, and Major-General Sir Howard Elphinstone. He also had four daughters, the second of whom, Anna-Charlotta-Maria, married Captain Sir Francis John Hartwell.

Although regarded as a brave and active officer, Elphinstone could also prove to be a difficult subordinate who sought to portray his own talents as superior to others, as highlighted by his time in the Russian service at the Battle of Chesme where he took the greater credit for the equal efforts of other British officers. He may have claimed the respect of Catherine the Great but she described him as mad, impulsive and illogical.