Having been promoted from the lower deck, Williams was commissioned lieutenant on 22 April 1769. 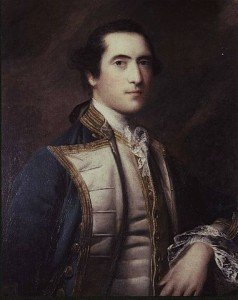 He was serving aboard Rear-Admiral Hon. Robert Digby s flagship Prince George 98, Captain Philip Patton, at the Moonlight Battle on 16 January 1780, and was sent to take possession of the battered and disabled San Julian 70. This vessel was later wrecked on the bar of el Puerto de Santa Maria, although her crew of five hundred, as well as the seventy members of the prize-crew, survived. He was exchanged and sailed from Gibraltar to England aboard the cutter Alert before returning to the Prince George.

Williams was promoted commander on 12 June 1780 upon joining the bomb Infernal 8 and being attached to the Channel fleet. He was posted captain on 1 January 1781, and after rejoining the Prince George 98 with the flag of Rear-Admiral Hon. Robert Digby he served in the Channel Fleet s relief of Gibraltar on 12 April.

In September the Prince George went out to North America, and she was with Rear-Admiral Thomas Graves fleet that sailed for the Chesapeake but was too late to prevent the surrender of the British Army at Yorktown. . She then sailed south with the Leeward Islands fleet, and Williams commanded her as a private ship at the Battle of St. Kitts on 25 January 1782, where she lost one man killed and three wounded, and at the Battle of the Saintes on 12 April, suffering nine men killed and twenty-four wounded on the latter occasion. After losing a mast in the action she had to be taken in tow by the Triton. He retained the Prince George into the following year and she was paid off at Chatham in July 1783.

Williams died in April 1792 at Bideford in Devon, and left at least one son, James Williams, who joined the Army and lived in nearby Barnstaple.