@1735-1796. He was born in Colwich, Staffordshire, a son of Rev. John Clements, the vicar of that parish and later the rector of Long Whatton, Leicestershire.

From 1748-9 Clements was employed in the East Indies aboard the Siren 24, Captain Matthew King.

Serving aboard the frigate Unicorn 28, Captains Matthew Buckle and James Galbraith, from 1755 in the Mediterranean and later in the Western Squadron, he was commissioned lieutenant on 4 December 1755. In May 1757 he was first lieutenant of the Unicorn to Captain John Rawling when she met the large privateer Invincible 24 of St. Malo. During the fierce action which followed he assumed command when his captain was fatally wounded, and he forced the surrender of the enemy. Taking his prize into Kinsale, he then returned to sea to capture the privateer s consort, in consequence of which intrepid behaviour he earned his immediate promotion to the rank of commander.

For a period of four months thereafter in the summer of 1757 Clements commanded the buss London 4, and he was posted captain on 29 September 1757, commissioning the new frigate Actaeon 28 for Channel service. In July 1758 he assisted the Alcide 64, Captain James Douglas, take the Robuste 24 armed en-flute. 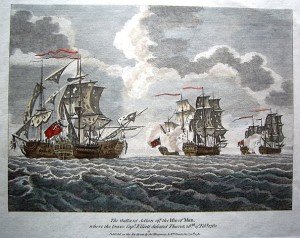 In the summer of 1759 he was appointed to the Pallas 36, serving in the blockade of Brest and in Quiberon Bay. During the following January he was forced in to Kinsale to refit, and was there with the Aeolus 32, Captain John Elliot, and Brilliant 36, Captain James Loggie, when news was received that a French squadron of five vessels had appeared off the coast under Commodore Fran ois Thurot. The British ships got up with the French off Belfast on the morning of 28 February and won a complete victory, capturing three frigates, the Mar chal de Belleisle 44, Blond 36 and Terpsichore 24. All three British captains were subsequently given a vote of thanks in the Irish parliament.

During the summer he tackled the Diad me 74 in the hope that his consort, the Shrewsbury 74, Captain Hugh Palliser, would join the attack, but after suffering significant damage he was forced to back off. The Pallas was then sent out to the Mediterranean in June 1760 where she remained until the peace, capturing the privateer Revanche on 23 June 1762 and returning to England in December 1763. Whilst she was being paid off Clements became involved in a dispute with the sailing master, David Hawkins, who, having failed to have his certificate signed due to a perceived lax performance, made counter-claims against his captain. At length an inquiry found in Clements favour, the charge being deemed groundless and malicious .

From 1769 Clements commanded the guard-ship Dorsetshire 70 at Portsmouth, and in the following year was sent out to the Mediterranean as part of the force detailed to shadow the French build-up at Toulon. This vessel was paid off in May 1771.

In March 1778 he was appointed to fit out the new Vengeance 74 at Portsmouth, and he fought her at the Battle of Ushant on 27 July 1778. He was subsequently called as a defence witness to Admiral Hon. Augustus Keppel s court-martial and was conspicuous by his testimony in his admiral s favour. Not surprisingly, despite his retirement from ill health some months later, he attributed the lack of any further offers of employment from the Tory administration to his support of the Whig Keppel.

In July 1780 he requested leave to visit Tuscany for the benefit of his health, informing the Admiralty that on his return he would hope to restore that reputation which at present appears to be much sullied . He was not given the opportunity and remained a captain until 1787 when he was placed on the list of superannuated admirals at the time of Lord Howe s famous promotion of more capable officers.

Clements health finally gave way in the 1790 s, he was held in confinement due to insanity, and he died in 1796.

His wife died in 1786. His address at the time of death was given as Weybridge, Surrey.

Clements was a favourite of Admiral Lord Anson.