He was the uncle of Admiral Sampson Edwards and Captain Valentine Edwards.

Edwards was serving in the West Indies as early as 1731, was commissioned lieutenant on 30 November 1740, and promoted commander on 6 September 1747. He had the brig Kingfisher 10 from August of that year, being present in Scottish waters in the spring of 1749 before taking a Guernsey smuggler into Weymouth that October, and he retained her until appointed to the sloop Falcon 10 in June 1752. With this vessel he went out to Africa and then Jamaica with the Assistance 50, Captain George Stepney, and following the latter s death in May1753 he was posted captain of the Assistance with seniority from 27 December 1753, having brought her home to pay her off. . 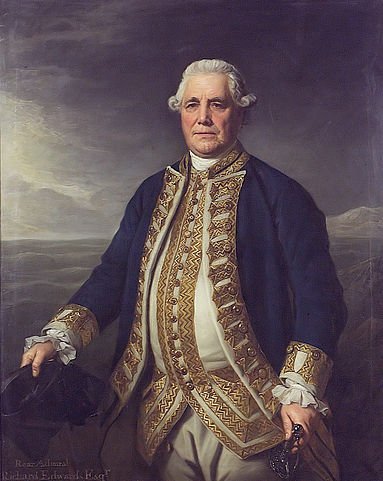 In August 1754 he commissioned the Gosport 44, going out to Africa in November before returning via the West Indies, and following the outbreak of the Seven Years War in 1756 he was employed in convoy duty, as he was in May 1758 when he took a convoy out to Newfoundland. He next enjoyed the command of the Belliqueux 64 from the spring of 1760, serving in the Leeward Islands until the latter part of 1761, and thereafter in the Mediterranean before being paid off in August 1763.

Edwards held the command of the guardship Ramillies 74 at Chatham from November 1767 until October 1770, removing to the yacht Mary the latter month with which he continued for the next seven years, returning to the Downs from Quebec in October 1775, and repeating that return in the following September with despatches from Major-General Sir Guy Carleton.

Having recommissioned the Sandwich 90 in November 1776 at Portsmouth, he received the flag of Admiral Sir James Douglas in the following February and commanded her at the Battle of Ushant on 27 July 1778, suffering twenty-two casualties and seeing a great deal of action.

Edwards was promoted rear-admiral on 29 March 1779 and was almost immediately appointed the governor and commander-in-chief at Newfoundland. After attending the King at a levee on 14 May he hoisted his flag ten days later at Portsmouth aboard the Portland 50, Captain Anthony Hunt, and set sail with several convoys on 7 June before being recalled by express so that the Grand Fleet could provide a heftier escort for the convoys. Once in Newfoundland he lived ashore for the most part in St. Johns rather than aboard ship, as was the custom of his predecessors. The Portland returned to Spithead in early December having parted company with several merchantmen in a gale off the Newfoundland Banks. After spending part of the winter in Bath Edwards again set sail for Newfoundland in 1780 aboard the Portland, Captain Thomas Lloyd, departing on 30 May and returning to Portsmouth on 15 November. He departed on 29 May 1781 for his final year in command of the station aboard the Portland, Captain Hon. James Luttrell, arriving on 14 July with some hundred merchantmen in convoy, and with the newspapers reporting that he had led several men-of-war in capturing thirteen American privateers in the Gulf of St. Lawrence and on the Newfoundland Banks prior to arriving at St. Johns. After arriving back at Portsmouth on 27 November it was announced in January 1782 that he would be succeeded by Admiral Gambier.

Edwards became a vice-admiral on 24 September 1787 and shortly afterwards, on the commencement of the Dutch Armament, he was appointed commander-in-chief in the Medway and at the buoy of the Nore. Hoisting his flag on 4 November at Rochester, he retained this position until 1792 with his flag predominately aboard the Sandwich 90, Captain Thomas Tonken.

He was promoted admiral on 12 April 1794, and died at Fordwich, Kent on 3 February 1795, a memorial wall tablet being erected to his memory at Canterbury Cathedral.

He was described as a good natured man who went by the name of Toby Edwards. Somewhat eccentric and amusing, he had few social graces and believed that seamen were superior beings to all others. During the American Revolutionary War he was termed the Friend to the Rights of Humanity by American merchants for his immediate return of prisoners without awaiting an exchange.