1741-1802. He was the eldest son of the Reverend John Graves of Castle Dawson, Ireland, and of his wife Jane Hudson, and the elder brother of Admiral Sir Thomas Graves. Two other brothers, John and Richard, also became superannuated admirals. His uncle was Admiral Samuel Graves, and he was a second cousin of Admiral Lord Thomas Graves.

Graves was commissioned lieutenant on 7 April 1772 and promoted commander of the sloop Viper 10 on 15 November 1775, his uncle, Vice-Admiral Samuel Graves, being he commander-in-chief of the North American station at the time. In early 1776 the Viper was at Antigua from where she sailed north to Maryland, and remaining in North American waters she was employed in the St. Lawrence River during the summer of 1777. 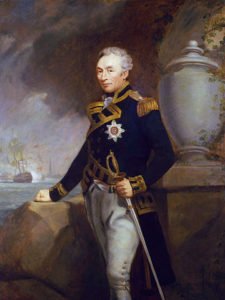 Graves was the elder brother of the more famous Sir Thomas Graves (here portrayed), Nelson’s second-in-command at the Battle of Copenhagen in 1801

In the early part of October 1777 the governor of Quebec, General Sir Guy Carleton, appointed Graves to the command of the vessels upon Lakes Champlain and George, but he had the misfortune to be shot in his left arm by a drunken soldier and the limb had to be removed. In February 1779 he was awarded a pension of 200 guineas in respect of this injury.

Graves was posted captain with seniority from 15 September 1777 and appointed to the Deal Castle 20, which was re-commissioning at Portsmouth. At the time he was still employed at Quebec, and as he then had to undertake a period of convalescence in respect of his injury the command of the Deal Castle instead went to Captain William Parker.

In 1779 Graves commissioned the French prize Danae 32, taking a convoy out to Quebec in May 1780 in company with the Pandora 24, Captain Anthony Parrey. During the voyage several of the merchant vessels became detached or were captured, and on one occasion the convoy was attacked by a French sail of the line. In turn the Danae captured the rebel privateers, Jack on 16 July and Terrible on 2 September, and she then departed the St. Lawrence in November with the homeward-bound convoy, although once again several vessels were lost from the convoy.

Graves was brought to a court-martial following complaints from the Quebec merchants about the number of their losses, and this convened aboard the Warspite in Portsmouth Harbour on 21 April 1781 under the presidency of Captain Charles Wolseley. Despite being acquitted on most of the charges levied against him, in particular it being resolved that none of the ships had been lost due to his inattention, Graves was found to have acted improperly in breaking away from the convoy to chase a perceived enemy, considered to be reprehensible for not signalling a change of course and then failing to gather the convoy in the next day, and reprehensible for leaving a brig to her own devices. With the charges being thus part proved he was sentenced to be dismissed his ship. The Admiralty clearly considered the sentence itself sufficient punishment, for shortly afterwards Graves was appointed to the Sceptre 64.

In February 1782 the Sceptre sailed with Commodore Sir Richard Bickerton s reinforcements to join the East Indian squadron led by Vice-Admiral Sir Edward Hughes, but she became detached with the Medea 28, Captain Erasmus Gower, and arrived at Madras before Bickerton in July. As a result she was available to participate in the Battle of Trincomale on 3 September where she lost two men killed and twenty-three wounded On 14 April of the following year the Sceptre chased down the French corvette Na ade 20, Captain Louis Thomas Villaret-Joyeuse, and captured her after a two hour struggle that was of infinite credit to the French. The Sceptre then fought at the Battle of Cuddalore on 20 June where she suffered casualties of seventeen men killed and forty-seven wounded before returning home with Commodore Sir Richard King s squadron and being paid off in June 1784.

Graves did not see any further employment and became a pensioned officer in 1790. He died in 1802.

He was married, his wife s maiden name being Featherstone.