1766-1840. He was born in Algiers, the second son of Edward Bayntun, the consul to Tripoli and consul general to Algiers, and of his wife, Annica Susan Werden, the daughter of Sir John Werden.

Bayntun joined the navy in May 1775 on the books of the Levant 28, Captain Hon. George Murray, based in the Mediterranean, following this officer to the newly commissioned frigate Cleopatra 36 in October 1779. He saw action aboard this vessel in the Western Approaches and North Sea, and fought at the Battle of the Doggersbank on 5 August 1781. In December 1782 he transferred once more with Murray to the guardship Irresistible 74, flying the broad pennant of Commodore George Bowyer in the Medway during that winter.

After taking passage out to the Leeward Islands in March 1783 aboard the Syren 32, Captain William Carlyon, which vessel delivered news of the peace, he was briefly aboard Admiral Hugh Pigot’s flagship Formidable 98 for a week before being commissioned lieutenant on 15 April and joining the sloop Zebra 16, Commander Edward Pakenham. He remained in the West Indies until the end of 1784.

During the Dutch armament in the autumn of 1787 Baytun joined the Hannibal 74, initially fitting out for the flag of Rear-Admiral Sir John Jervis and the captaincy of Josias Rogers before she was paid off within two months when the fleet was stood down. From December 1788 he was the second lieutenant of the Penelope 32, Captain John Linzee, going out to the Leeward Islands in the following February and later serving at Halifax before leaving her in August 1790. Through the Spanish Armament in 1790 he was a lieutenant aboard the Prince 98, Captain Josias Rogers, flying the flag of Rear-Admiral Sir John Jervis from August to December, and he then joined the Assistance 50, Captain James Cranstoun, which vessel was paid off in September 1791 at the end of the Russian Armament.

Following the outbreak of the French Revolutionary War in February 1793 he joined the Duke 90, Captain George Duff, flying the broad pennant of his old commander, Commodore Hon. George Murray, in Rear-Admiral Alan Gardner’s disappointing Leeward Islands expedition which departed Britain in March and returned home in the autumn. 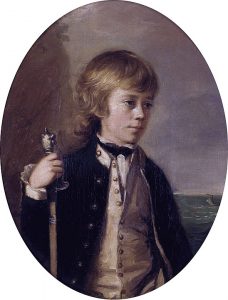 A portrait of Midshipman Bayntun of the frigate Cleopatra

In November 1793 Bayntun joined the storeship Ulysses 20, Commander Richard Morice, which sailed from England that month for the Leeward Islands in Vice-Admiral Sir John Jervis’ expedition, and in January 1794 he removed to the flagship Boyne 70, Captain Hon. George Grey. On 10 March he was promoted to command the captured sloop Avenger 16 following the untimely death of Commander James Milne whose commission had lasted only a few weeks, and he saw action with the Naval Brigade at the capture of Martinique. On 4 May he was posted captain of the frigate Undaunted 38, another French capture, and he subsequently commanded several ships in a temporary capacity including the Nautilus 16, in which he was sent back to Martinique from Guadeloupe to obtain troop reinforcements. Other commands were the Veteran 64 during July in succession to the late Captain Lewis Robertson, and briefly the Solebay 32. Remaining in the Leeward Islands, during 1795 he commanded the Resource 28 and later the eighteen pounder frigate Beaulieu 40 for three months after Captain Edward Riou was invalided home in August of that year.

Upon returning to England he joined the swift-sailing twelve-pounder frigate Reunion 36 after Captain William Hotham had temporarily commanded her on the North Sea station in July 1796, which vessel had been captured from the French by Captain Sir James Saumarez in 1793. Operating out of Yarmouth, she returned to that port in September from Vice-Admiral John MacBride’s squadron off the Texel, and in November brought the Baltic convoy into the Yarmouth Roads.

At the beginning of December 1796 the Reunion was ordered to sail for Cuxhaven from Sheerness to collect the Prince of Wittenberg and his suite, but on 7 December she was wrecked on a sandbank thirteen miles south-east of Harwich, with the local fishing boats saving all but three men. Bayntun returned to London to personally inform the lords of the Admiralty of the unfortunate incident, and following a court-martial that concluded on 17 December at the Nore he was reprimanded, his sailing master broke, and the pilot ordered to undergo a year’s imprisonment in the Marshalsea.

In January 1799, after two years unemployment, Bayntun recommissioned the Quebec 32 at Portsmouth, and after sailing out to the West Indies in April with a convoy he commanded her at Jamaica during the following year. In the spring of 1801 he exchanged with Captain Robert Mends into the Thunderer 74, and when that vessel was ordered home to undergo a complete repair he moved to the Carnatic 74. By January 1802 he was the captain of the Cumberland 74 at Port Royal, and later in the year, by which time the country was enduring an uneasy peace with France, he raised a commodore’s broad pennant, sailing out of Port Royal in early December with six sail of the line in three divisions.

Following the renewal of hostilities with France in the spring of 1803 Rear-Admiral Sir John Thomas Duckworth became the commander-in-chief of the Jamaican station and Bayntun continued to serve under that officer. On 30 June off St. Nicholas Mole, and whilst in company with the Vanguard 74, Captain James Walker, the Cumberland captured the French frigate Créole 40 armed en-flute, Captain Jean Marie Lebastard, with five hundred and thirty troops aboard including a general by the name of Morgan who was understood to be the second-in-command at Saint-Domingue. During October the Cumberland intercepted a number of American ships off Cuba which had evacuated the French garrison from Port-au-Prince following the slave uprising on Saint-Domingue, and after disarming the troops Bayntun sent them on their way.

On 11 December 1803 the Cumberland left Port Antonio, Jamaica with a forty-two sail convoy in the company of her prize, the Creole, Captain Austin Bissell, but that vessel had been badly repaired at Port Royal and was so leaky that she had to be abandoned and burned on 2 January 1804. The Cumberland arrived at Plymouth on 24 January with twenty-six men having lost their lives to illness on the way home, but Bayntun earned the approbation of the merchants who rewarded him with a sword for his safe conveyance of the convoy.

He immediately recommissioned the Leviathan 74, sailing out of Portsmouth Harbour on 29 January 1804 and departing for the Mediterranean with a small convoy on 9 April. Attached to the fleet off Toulon, he was with Vice-Admiral Lord Nelson in the chase of the French fleet to the West Indies following its breakout on 29 March 1805. Rejoining the Mediterranean fleet on 8 October, he fought at the Battle of Trafalgar on 21 October where his command, the fourth placed in the lee line, engaged the French flagship Bucentaure 86, the giant Santisima Trinidad 140, and received the surrender of the San Augustin 74 for the loss of four men killed and twenty-two wounded. He was later praised by Vice-Admiral Lord Collingwood for his part in destroying those of the prizes which were considered beyond saving, including the San Augustin, and for rescuing men from the Monarca 74. On 30 November his ship returned to Plymouth from Gibraltar in the company of the Royal Sovereign 110, Captain Edward Rotheram, with both being described as ‘much mauled’ and under jury-masts, and with the Leviathan having at some point in the voyage home taken her consort in tow. After landing prisoners of war from the battle the Leviathan was paid off on 31 December.

Bayntun was in London to participate in Lord Nelson’s funeral procession on the Thames on 6 January 1806, and he commissioned the Implacable 74 in May, which vessel had been taken from the French as the Duguay-Trouin during Commodore Sir Richard Strachan’s action of 4 November 1805. It does not appear however that Bayntun ever took the Implacable to sea.

He was appointed to the twenty-five year-old Africa 64 on 5 November 1806, joining Rear-Admiral George Murray’s squadron which sailed on Christmas Day for South America to support the army during its unsuccessful attempt to take Buenos Aires following the capture of Montevideo on 3 February 1807. He returned to Portsmouth with Murray’s squadron in January 1808, and was promptly invited up to London to give evidence at the court martial of Lieutenant-General John Whitelocke, who was ultimately found guilty and dismissed the Army for surrendering Montevideo and capitulating to the Spanish in the River Plate.

In January 1808 Bayntun was re-appointed to the Leviathan 74 which was being commissioned in the Hamoaze at Plymouth, but she remained at the Devonshire port throughout the spring and early summer until Captain Hon. Charles Paget arrived to take command, although he then too promptly took on another command. Remaining out of active service, Bayntun inspected the newly-constructed monument to Lord Nelson on Portsdown Hill near Portsmouth in November with Captain Thomas Fremantle.

Returning to duty, he commissioned the brand new Milford 74 in May 1809, which arrived at Plymouth that month to be coppered and fitted out, and in June she received aboard some of the crew of the Ocean 98, lately the flagship of Vice-Admiral Lord Collingwood, which had returned home from the Mediterranean for repairs. By the end of August the Milford was fully manned and ready for sea, and on 7 September she sailed for the Rochefort station. She returned to Plymouth for a refit at the end of December having suffered damage in bad weather and in January 1810 arrived at Portsmouth from Plymouth before in February she briefly visited Plymouth prior to re-uniting with the squadron in the Basque Roads. She came home to Plymouth once more in May before going back to the Basque Roads, and Bayntun left her after she re-entered Plymouth on 28 July. In August he was appointed to superintend the payment of ships afloat at Plymouth, and his final service was in command of the yacht Royal Sovereign at Deptford from the early autumn of 1811, in the course of which employment he was presented to the Prince Regent at a levee in the following May.

Having previously retired to Bedfordshire and also spent time in London, Admiral Bayntun died after a short illness at Bath on 17 December 1840, in which city he had become a leading member of society. He was buried in All Saints Church, Weston, Bath.

Bayntun married Sophia Mayhew of Bath at Stoke Damerel, Plymouth on 29 August 1809. She died on 16 September 1830 at their residence in St. James Square, Bath having had issue two children, one of whom, a daughter, had been born in 1815.

He was a protégé of Lord St. Vincent and was well regarded by Lord Nelson, although neither admiral was able to guarantee him regular employment throughout his career. A humane man, whilst serving at Jamaica in 1801 he had sought better conditions aboard the prison and hospital ships.