On 10 February 1729 Harland entered the service aboard the Falkland 50, Captain Samuel Atkins. He was promoted lieutenant of the Weymouth 60, Captain Charles Knowles, on 25 February 1742, and served thereafter in the Princess 70, Captain Robert Pett, being present at the Battle of Toulon on 11 February 1744. Shortly afterwards he removed to the Namur 90, Captain William Dilke, the flagship of Vice-Admiral Thomas Mathews.

He was promoted commander of the fireship Scipio 8 on 4 January 1745, sailing with a convoy under the orders of Admiral Edward Vernon from Portsmouth to the Downs in August. On 19 March 1746 he was posted captain of the Tilbury 60 which was stationed at Portsmouth that spring. Here, on 27 July, he fought a duel with a Major Beard of the ‘Young Buffs’ Regiment after that officer had stuck him following an altercation in a coffee house, the consequence of which was that the major was dangerously wounded. In the spring of 1747 the Tilbury carried a French prize into Gibraltar, and in May she sailed for the Downs from Lisbon and Oporto with thirty merchantmen to arrive on 5 June. She subsequently joined Rear-Admiral Edward Hawke’s Western Squadron and fought at the Battle of Cape Finisterre on 14 October 1747. 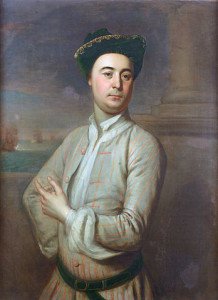 Upon commanding the Nottingham 60 from December 1747 in succession to Captain Philip Saumarez who had lost his life at the Battle of Cape Finisterre, Harland put out to sea from Plymouth on 16 January 1748 with Hawke’s squadron. He played a leading role in the capture of the French sail of the line Magnanime 74 on 31 January 1748, having engaged her for an hour before being joined by the Portland 50, Captain Charles Steevens, although it was another five hours before the Frenchman struck. The prize was carried into Kinsale by the Nottingham, and in April the latter sailed with a small squadron from Plymouth on a cruise to the westward, prior to entering Falmouth in August with news that she had fallen in with a homeward-bound Dutch East India convoy from Batavia. Early in September it was announced that the Nottingham’s crew were to be discharged, and on 11 October, and with the Austrian War of Succession having come to an end, she was paid off and de-commissioned at Portsmouth. In the meantime, Harland had been appointed to the Lyme 24 on 30 September, but this vessel was still under construction at Deptford, and when she was eventually commissioned in February 1749 it was under another officer.

On 25 April 1749 Harland was appointed to the French-built Monarch 74 to serve as a guardship at Portsmouth, having the honour of hoisting Vice-Admiral Sir Edward Hawke’s flag on 14 April 1750 when that officer took up the position of commander-in-chief at the port. Harland received the Prince and Princess of Wales, the future King George III and Queen Charlotte, aboard the Monarch in August, and he retained her command until 20 December 1750.

In March 1755 Harland was appointed to the Essex 70, which he commissioned at Chatham before sailing for Blackstakes to take on her ordnance at the end of May. Arriving at Portsmouth from the Downs on 3 August, the Essex remained at Spithead for some weeks, and when she did get away in early November she was forced back by fierce winds. In March 1756 she was despatched on a cruise from Portsmouth under the orders of Commodore Hon. Augustus Keppel, and she returned to the Hampshire port on 7 June from Vice-Admiral Hon. Edward Boscawen’s Channel fleet. On 13 July she sailed to rejoin Boscawen, and Harland made several captures over the next few weeks, including four homeward-bound French West Indiamen in early September which had initially formed a line to fight him, but had then struck after suffering the full force of the Essex’s lower deck guns. It was later reported that during the brief action the French had lost seven men killed and their commodore a portion of his buttocks! The prizes, reputed to be worth sixty thousand guineas, or £13m in today’s money, were all carried into Portsmouth, and Harland resigned the command of the Essex in the first week of November.

In May 1758 he commissioned the new Conqueror 70 which was launched that month at Harwich, and in September she received men from the laid-up Monarch 74 at Chatham to complete her crew. At the end of December she arrived at Portsmouth from the Downs with a large convoy, and she sailed for the Mediterranean in March 1759 to join Admiral Hon. Edward Boscawen’s fleet. Upon attempting to destroy two French frigates in a bay near Toulon on 7 June, Harland’s command and two other sail of the line were forced to withdraw under the tow of the boats of the fleet after engaging the vessels and four shore batteries for the best part of two hours, with the Conqueror losing two men killed in this action. On 15 August, in the rush to sail out from Gibraltar on news of the French being at sea, Harland exchanged with Captain William Lloyd of the Princess Louisa 60, and he fought at the Battle of Lagos three days later. His new command came home after the battle with the captured French sail of the line Centaure 74 to arrive at Blackstakes on 30 October, and she was eventually paid off in the following April, by which time Harland had left her. 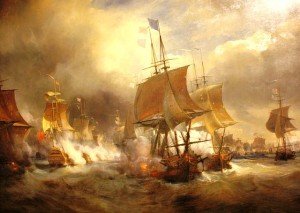 Admiral Harland was second-in-command at the controversial Battle of Ushant in 1778.

Remaining ashore for the next eleven years, he appears to have acted as a justice of the peace in his native Suffolk, for on 5 August 1765 at Nacton Heath near his Ipswich home, a Captain Harland read the riot act to a body of rudimentarily armed men and women who had refused to disperse from a protest against conditions in a local poorhouse, resulting in a party of dragoons and grenadiers wading into the mob to make arrests.

On 18 October 1770 Harland was promoted rear-admiral, and having been created a Baronet of Sproughton on 5 March 1771 he sailed from St. Helens three weeks later with his flag aboard the Northumberland 68, Captain John Symons, and with three other small sail of the line, to serve as the commander-in-chief in the East Indies. Initially it was intended that he station his fleet off the Ganges to prevent any French incursions into Bengal. Arriving at Madras on 2 September after what was described as a quick passage, his death was erroneously reported at home in August 1773. A quiet posting ended when he left for England in late 1774, but by the time his squadron reached the Cape in November it had lost one hundred and fifty men to sickness on the voyage from Madras, having previously lost many in Bengal. He eventually arrived home in May 1775 with a huge fortune estimated by the newspapers to total one hundred and fifty thousand pounds, equivalent to £23m in today’s money, and after reaching London on the 8th he and Lady Harland were presented to the King and Queen at court shortly afterwards.

On 3 February 1776 he was promoted vice-admiral, and on 25 March 1778 he raised his flag at Portsmouth aboard the Hector 74, Captain Sir John Hamilton, transferring within days to the Queen 90, Captain Isaac Prescott. He was present at Spithead during the King’s review of the fleet in the first week of May, and he commanded the van as second-in-command to Admiral Hon. Augustus Keppel at the Battle of Ushant on 27 July, displaying great initiative in tacking without orders to renew the attack on the French. On 22 August his division put out of Plymouth to be joined a day later by the rest of the grand fleet, and after returning to port he, Keppel, and the third in command, Vice-Admiral Sir Hugh Palliser, were presented at court on 5 November.

By the autumn of 1778 the political fall-out from the Battle of Ushant involving the opposing Keppel and Palliser factions was in full swing, and Harland would display great loyalty to the commander-in-chief. With the fleet in port for the winter, he attended Bath in December, and here he received notice to attend Keppel’s court martial in January. Following the latter’s acquittal, he shared with Prince Henry, the Duke of Cumberland, the honour of walking at the commander-in-chief’s shoulder during the triumphant procession to his house in Portsmouth High Street, and he later attended the banquet at the London Tavern in Keppel’s honour. He was also with Keppel and a number of other officers who attended a levee with the King on 19 February 1779.Throughout the spring there were rumours that Harland had declined both the command and the position of second in command of the Grand Fleet, and despite hoisting his flag aboard the Royal George 100, Captain John Colpoys, at Portsmouth on 12 April he penned a letter of resignation from his flagship on 10 May, ‘objecting to serve with, or command men high in rank who differ so much in opinion with me on the great points of naval discipline.’

Although Harland initially refused to see any further service under Lord Sandwich, the first lord of the Admiralty did convince him to take command of a squadron destined for the Cape at the end of 1780, but in the event political expediency required that Sandwich give the command to Commodore George Johnstone. On the fall of Lord North’s administration it was mooted that Harland would be appointed to command the Leeward Islands station, but instead he became a lord of the Admiralty under Keppel on 30 March 1782 before resigning with him on 28 January 1783 following the change of government. During this term of office he was promoted to the rank of admiral on 8 April 1782.

Admiral Harland died at his residence at Sproughton, near Ipswich in Suffolk, on 21 February 1784.

He married Susanna, the daughter of Colonel Rowland Reynold, on 12 October 1749 at St. George’s Chapel, Mayfair, and had issue three daughters and one son who joined the First Regiment of Dragoons. His daughter Marianne married Major-General William Dalrymple. At the time of Harland’s marriage it was reported that his bride was ‘a very accomplished lady with 40,000 guineas, equivalent to about £9m in today’s money.

Harland was well regarded by Admiral Earl of St. Vincent, a man who did not convey such praise lightly. He was a friend of Rear-Admiral Sir John Lindsay..