Cotgrave was commissioned lieutenant on 15 May 1780, and in 1791 he recommissioned the cutter Ranger 14 in that rank, largely operating out of Plymouth. This duty appears to have been mostly without incident, although in late September 1793 she was sent in pursuit of an American ship, on board of which were five French prisoners of war who had made a hole through the wall in the Mill Prison to make good their escape. On 16 October she arrived at Portsmouth with eighteen merchantmen from the Devonshire port, and she continued to operate from Plymouth over the winter.

During March 1794, the Ranger became the subject of national headlines when a young seaman was found apparently dead in his hammock and taken ashore for an immediate burial, only to be dug up later that evening after it had been established that he was prone to fits which rendered him lifeless for hours on end. Unfortunately, it appears that he had in fact been buried alive and had died because of his premature incarceration. In early May the Ranger ferried seamen from the hospital at Plymouth to be distributed around the Channel Fleet, and she was present at the Battle of the Glorious First of June where she rescued twenty-five French seamen from the sinking Vengeur 74. 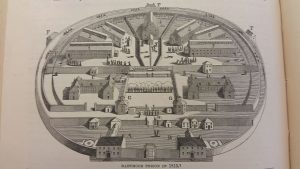 How Dartmoor Prison looked at the time when Captain Cotgrave was the governor.

A week after the battle, on 8 June, a French squadron, and in particular the frigate Railleuse 36, captured the Ranger off Brest. Cotgrave would later allege that he and his men were driven into the frigate’s boats by drawn swords, and that he was personally manhandled to the deck of the frigate before he and his men were stripped of all their clothing and thrown into the hold. Come the next day he alleged that they were forced to stand in the rain, still naked, from 9 a.m. to 6 p.m. Only when they reached Brest was part of their clothing returned, and fears that they were to be put to death were allayed by the French realisation that many of their own seamen had fallen into British hands following the Battle of the Glorious First of June.

Cotgrave appears to have been exchanged in the late summer of 1795, for on 14 September he was court-martialled for the loss of the Ranger aboard Admiral Sir Richard King’s flagship Cambridge 80 at Plymouth, being honourably acquitted.

On 2 January 1797 he was promoted commander of the recently purchased bomb Volcano 10, lying at Plymouth, and seeing service in home waters. She was in the Downs during the spring of 1798, and in January 1799 was docked at Plymouth. Here in the following month, her surgeon and sailing master fought a duel which left the latter dangerously wounded with a ball in the knee. After sailing from Plymouth on 27 June, she was present in the unsuccessful bombardment of a Spanish squadron in the Aix Roads on 2 July, and she was back at Sheerness by January 1800.

On 19 July 1800 Cotgrave took a recently purchased vessel, the Gannet 16, down the Thames for service in the Downs where she remained for some weeks. At the beginning of October, she sailed with several other men of war with a convoy but had to put back due to poor weather, and she was in the Downs again during November, prior to entering Sheerness on the last day of the month. She then put out again three weeks later and in the last days of the year undertook a brief cruise on the coast of France.

The Gannet continued to serve in the Downs during 1801, sending a Danish brig into Ramsgate in January, and capturing the Dunkirk lugger Vengeance 10 off the French coast on 28 March after chasing her across the Channel from Dungeness. Continuing in the Downs and undertaking the occasional convoy duty to Portsmouth, on 15 August Cotgrave was one of four commanders under the orders of Vice-Admiral Lord Nelson who took their boats in to attack the French flotilla at Boulonge. His own division lost five men killed and twenty-nine wounded in the disastrous attack, and only his proficiency at swimming saved him from drowning after his own boat had sunk.

The Gannet was back in the Downs by 2 September 1801 before departing with Nelson’s squadron for Boulogne eight days later, but shortly afterwards it was announced that the sickly Cotgrave had been replaced by Commander Alexander Saunderson Burrowes. It is not clear when or if Cotgrave returned to command the Gannet, as varying reports suggest that he was back at the helm when she left the Downs for Sheerness in early February 1802, although Burrowes is also credited with commanding her at this time, as he was when, with the war ending, she returned to Sheerness on 22 April. In any event Cotgrave would have left the Gannet upon being posted captain on 29 April.

In 1806 he was serving as agent, and in effect the governor, for prisoners at the notorious Mill Prison in Plymouth, in which capacity he bade farewell to Vice-Admiral Pierre Villeneuve when that officer returned to France and his probable murder in April. During October 1808 Cotgrave left Plymouth for a similar position at the even bleaker Dartmoor Prison, one that he had specifically requested, and he eventually vacated that role in December 1813. During his tenure he insisted on a daily parade and vacation of the buildings for the benefit of his charges, but although he was strict, he was also fair and humane, being well regarded by the French prisoners of war. American commentators were less kind however, accusing him of heinous behaviour towards them following the outbreak of the War of 1812, although this criticism appears to have been unwarranted.

He married Margaret Blake and had seven sons and four daughters. Three of his sons, Edward, Richard, and Rowland, entered the Navy, with the former seeing service with him aboard the Volcano and Gannet. In October 1804 one of his sons was killed when serving aboard the Plymouth privateer Lord Melville during her capture of a Spanish 24-gun vessel off the Azores, the action being remarkable for the fact that the entire British crew had to board their enemy when their own ship caught fire to later sink.