Roberts was commissioned lieutenant on 23 December 1793, and it appears likely that he fought at the Battle of the Glorious First of June in 1794 aboard the Defence 74, Captain James Gambier.

He was promoted commander of the sloop Snake 18 on 14 February 1801, but after sailing from Portsmouth for West Africa eight days later, he had to put back to St. Helens because of contrary winds. The Snake then collected a small convoy of two vessels from Falmouth, and she sailed from that port for her original destination on 7 March, although one of the vessels was soon feared lost. After returning home, she departed Liverpool on 6 June with two vessels under convoy for the West Indies, and thereafter she saw service on the Jamaican station.

In the summer of 1802, the Snake was dispatched to Honduras, from where she returned to Port Royal in October, and in July 1803 she was sent with four other men-of-war to Saint-Domingue. On 2 August off Jérémie, she intercepted a dozen vessels which had been bound for Cap François, and in so doing took prisoner over five hundred soldiers, including a general by the name of Freyssenet. She arrived at Port Royal at the end of the month with her captures, including several that were American. On 10 November, after a day-long chase off Jamaica, she destroyed a French privateer by driving her onto Rocky Point, taking off her crew of sixty men.

In the spring of 1804 Roberts commanded a squadron operating out of the Bahamas, and it then appears likely that he returned home with the convoy that left Jamaica on 30 June, for on 24 August he was posted captain of the French frigate Vertu 40, which had been captured at Saint-Domingue in the previous November, and which Captain Murray Maxwell had delivered to Plymouth on 9 August, having come home with that convoy. It is unlikely that Roberts ever took the Vertu to sea however, for upon her arrival she had been ordered up the Hamoaze to be paid off, as she was in a leaky condition and required a lot of repairs.

In August 1808 he was appointed to the Daphne 22 in place of the sickly Captain Francis Mason, but when that vessel returned from Gothenburg to Yarmouth on 29 November it was under the command of Captain Philip Pipon, suggesting that if Roberts ever did join her, it was for a short time only. 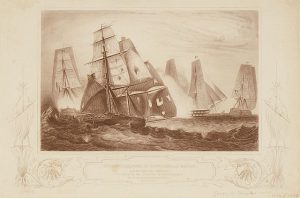 On 4 December 1808 it was announced that Roberts had commissioned the Castor 32 at Sheerness, and she sailed from the Nore to the Downs at the end of January before leaving on 7 February with a convoy for Portsmouth. From here she departed on 3 March with a large convoy for the West Indies, and after reaching Barbados on 11 April she sailed with the trade for Dominica shortly afterwards.

Remaining in the Leeward Islands, the Castor’s boats joined a squadron that unsuccessfully attempted to cut the French brig Griffon 16 out of Port Marin, Martinique on 27 March 1809, being driven back by her fire despite having taken possession of a battery. She subsequently played a leading role in the chase and capture of the French sail of the line Hautpoult 74 from 14 to 17 April and was involved in the operations from 13-18 December that saw the French frigates Loire 40 and Seine 40 brought to account.

Captain Roberts left the Castor in October 1810 and returned to England, whilst his erstwhile command remained in the Leeward Islands under her new captain, Charles Dilkes. He died, apparently from an apoplectic fit, in his apartments in Oxford Street on 19 February 1811, and although he was initially buried in St. James’ Chapel, Hampstead Road, London, his body was removed and buried in Westminster Abbey on 7 November 1812 at the instigation of his sister, Sarah.