c1748-1817. It is thought that he was born in Norfolk, Virginia, and that his brother was pressed into the Navy at the same time as him and later served in the Russian Navy where he commanded the Benefactor 130 and rose to the rank of commodore.

It is likely that Portlock and his brother were pressed into the Navy from the merchant marine, and that he was allocated to the Plymouth-based guardship St. Albans 64, Captain Charles Douglas, in 1771. Initially rated as an able seaman, he was promoted to the quarterdeck by Douglas, removing with him into the guardship Ardent 64 in the Medway and later serving aboard the Ramillies 74 on the same station. 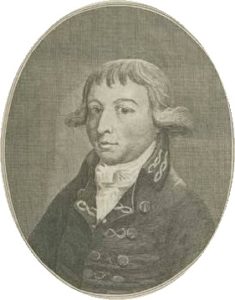 In 1776 he was appointed a master s mate on the Discovery, Captain Charles Clerke, and he participated in Captain James Cook s third voyage of exploration, removing in August 1779 to the late explorer s Resolution. Returning to England in September 1780 aboard the Sibyl 28, Captain Tomas Pasley, to which vessel he had transferred at the Cape, he was commissioned lieutenant on 14 September and joined the fireship Firebrand, Commander George Robertson, serving with the Channel fleet and participating in the Relief of Gibraltar on 12 April 1781.

In May 1785 the King George s Sound Company, of which he was a partner, appointed Portlock to the command of the merchant vessel King George, in which he sailed from Gravesend on 29 August with a smaller consort under the command of George Dixon, the Queen Charlotte, with the intention of establishing a fur trade on the Pacific coast of North America. The two vessels arrived in the Falkland Islands in January 1786 and after sailing around Cape Horn and visiting the Sandwich Islands were at Cook s River on the north-west coast of America on 19 July. Their first season s trading was not particularly successful, but after wintering in the Sandwich Islands they returned to Alaska in the spring and upon separating enjoyed a more fruitful season. Even so, after arriving at Macao in November 1787 they found that the sea otter pelts they had collected barely made a quarter of the price that they had been expecting. Leaving China in February 1788, they eventually returned to England on 24 August where Portlock began to compile an account of their adventures which would be published as A Voyage around the World, but more particularly to the North West coast of America.

During the Spanish Armament in 1790 he served aboard the Barfleur 98, Captain Robert Calder, and in 1791 was placed in command of the brig Assistant 6 as a tender to Captain William Bligh s Providence in a mission to obtain breadfruit plants from the Pacific, this being Bligh s second such voyage after his first had been curtailed by the mutiny on the Bounty. Having kissed hands with the King in June, Portlock took the Assistant out from Spithead on 3 August and the two ships reached Tahiti in the following April. Whilst returning through the Torres Street in September one of Portlock s crew was fatally wounded following an assault by hostile natives, but the Providence and Assistant eventually reached the West Indies in January 1793 where they were able to unload the precious breadfruit trees. Here they were briefly detained by Commodore John Ford at Jamaica to bolster his squadron until it could receive reinforcements from England, war having by then been declared with France.

Returning home in August 1793, Portlock was promoted commander on 4 November, and in May 1794 he was appointed to command the newly purchased brig Reliance 10, then fitting out at Deptford to carry despatches out to New South Wales. Although he did commission the vessel she eventually sailed under Commander Henry Waterhouse in the following spring.

In the autumn of 1796 Portlock was appointed to commission the brand new sloop Arrow 28, an experimental vessel with four sliding keels and no ballast, drawing just ten feet of water, and armed with twenty-eight 32 pounder cannon. In this vessel he served in the Channel for a year and was present during the Spithead mutiny from 16 April 1797 before moving to the Downs station. In May 1798 his boats rescued five men from the wreck of the Sunderland brig Renown after she had grounded on the Kentish Knock, the last remnants of their vessel sinking before the Arrow s boats were back on board the sloop.

On 12 September 1799 the Arrow captured the aged Dutch sloop Draak 18 near Harlingen, although such was her condition that Portlock was obliged to order Captain William Bolton of the Wolverine 12 to set her on fire. During the action he was wounded in the knee. On 28 September 1799 he was posted captain, and the Arrow was present in company with the Lutine 32, Captain Lancleot Skynner, just before that frigate sank on 9 October 1799 off the Texel with the loss of all but two men.

Portlock did not serve again, but took up a post with the Sea Fencibles on the resumption of war with France in 1803, commanding the Poole district from Calshot Castle to St. Alban s Head, and three years later transferring to the Dartmouth district. By 1807 his health was in decline, and after becoming increasingly ill in his later years he was admitted to Greenwich Hospital in 1816, where as one of the captains he died on 12 September 1817.

He married Elizabeth Gilmour on 18 December 1781 at St. Mary Aldermay, London, and was the father of Major-General Joseph Portlock of the Royal Engineers. In August 1806 his eldest son, Henry Powney Portlock, died as a 17 year-old midshipman when he fell overboard from the main-topsail yard of the Fame 74, Captain Richard Bennett, in the Bay of Bulls, Newfoundland. His marital nephews, Charles and Robert Rubridge, served with him in the late 1790 s. Portlock lived for many years in Seahorse Street adjoining Cold-Harbour in Gosport.

A first-class seaman who would have achieved more with patronage behind him, he enjoyed a mutually esteemed relationship with William Bligh.