Marlow was commissioned lieutenant on 25 July 1743.

As a lieutenant he temporarily commanded the Dolphin 24 for Captain Carr Scrope in Vice-Admiral Hon. John Byng s controversial Battle of Minorca on 20 May 1756, and he was posted captain of that vessel on 6 June. Retaining the command despite being summoned to provide witness evidence at Byng s trial, he assisted the Hussar 28, Captain John Elliot, in sinking the French Alcion 50 with all hands after a two-hour night action on 23 November 1757. In the same year he captured the Marquis de Barrail 12 off Dunkirk, and he was rewarded with the freedom of Aberdeen for his protection of the coast and local trade. 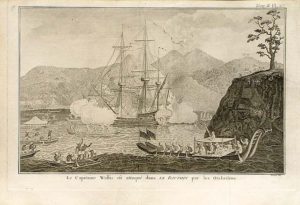 Marlow’s command, the Dolphin, later became a vessel of exploration. She is pictured at Tahiti in 1767 when commanded by Samuel Wallis

Continuing with the Dolphin, on 26 May 1758 he joined the Solebay 28, Captain Robert Craig, in attacking the Mar chal de Belleisle 44, which vessel was commanded by Commodore Fran ois Thurot. The Dolphin was damaged early into the action, and after getting back into the fray her crew had the mortification of seeing the Frenchman escape. Marlow subsequently requested a court martial into his conduct, mainly as a result of Craig s criticism, and he was honourably acquitted. Thereafter he was engaged in cruising and the conveyance of trade to North America in 1761, giving up the command later that year after returning to the Downs with a convoy from Charleston. During 1762 he commanded the Prince 90 in the grand fleet.

Apart from commanding the Impress Service at Whitehaven during the Falkland Islands dispute of 1770-1, Marlow remained unemployed until the beginning of 1775 when he took the Coventry 28 out to the East Indies. Here he remained for the next seven years, being present at the actions with the French off Pondicherry from 10 August 1778 and assisting the Seahorse 24, Acting-Captain John Panton, in the capture of the Sartine 32 fifteen days later. He became flag captain to Commodore Sir Edward Vernon aboard the Rippon 60 in the East Indies once Captain George Young was sent home with despatches in October 1778, and he returned with Vernon to England with a convoy, arriving in the Downs in March 1781, having already been promoted rear-admiral on 26 September 1780.

Marlow did not see any further service but was further advanced to vice-admiral on 24 September 1787 and admiral on 12 April 1794. He died at Hampstead in 1795 and was buried at Alverstoke, Hampshire.