Henry joined the service in 1744, but his early career suffered as a consequence of a break to his thigh in an accident involving a hawser. He was commissioned lieutenant on 27 April 1757, and was the senior lieutenant of the Hampton Court 64, Captain Alexander Innes, at the reduction of Havana in 1762.

During 1777, initially with the rank of lieutenant, and later after being promoted commander on 16 April, he held the acting captaincy of the hired armed ship Vigilant 20 at New York, and thereafter off Baltimore. Whilst serving in the Philadelphia Campaign from 25 August he performed excellent service in destroying the enemy works on Mud Island, having risked a channel behind the fort to bombard the enemy at short range. He was highly praised by General Sir William Howe for his part in the action and as a result was posted captain on 22 November 1777, being appointed to the Fowey 24 .

On 6 May 1778, acting in co-operation with Major Hon. John Maitland, he commanded the galley Hussar and several boats escorting a battalion of infantrymen in eighteen flatboats up the Delaware from Philadelphia to deal with the enemy fortifications at Bordentown. Without suffering a single casualty the combined force successfully destroyed a battery and nearly fifty American vessels, amongst which were the Washington 32, Effingham 28, three ships of sixteen guns, and three of ten. In July, having returned to the Fowey, he helped shepherd a convoy of twenty vessels from Rhode Island and Halifax through Long Island Sound to New York after learning that the French fleet was off Sandy Hook.

In 1779 Henry was the senior naval officer in a small squadron anchored off Savannah when the French fleet under the Comte d’Estaing with twenty ships of the line and four thousand troops arrived to summon the town. The crews of the men-of-war joined the Army ashore in defending Savannah during September-October, and with the French prevaricating over an attack the defences were sufficient to see off a final assault, in which they inflicted heavy casualties. In May 1780 he commissioned the captured rebel frigate Providence 32, in which he left New York with dispatches on 15 September to reach Portsmouth twenty-three days later, prior to taking her into Plymouth on the first day of December where she entered the Ordinary. 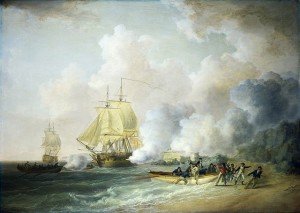 Captain Henry served at the capture of Martinique in 1794

Towards the end of December 1780 he was appointed to the Renown 50 at Plymouth, where she remained over the winter. At the beginning of March 1781 it was reported that he had been ordered to Liverpool and Belfast to pick up trade for the Baltic, but the Renown then sailed for the River Plate in South America, allegedly with arms in preparation for an attack on the Spanish possession by a squadron under Commodore George Johnston, although in the event that expedition was cancelled in favour of an assault on the Cape. On 14 October the Renown arrived at Plymouth with seventeen East Indiamen and two whalers from St. Helena, having been dispatched to meet them off the Azores after the Hannibal 50, Captain Alexander Christie, had failed to arrive before their departure date. She then remained in the Downs before escorting four East Indiamen around to Portsmouth at the beginning of November.

On 12 December 1781 the Renown formed part of Rear-Admiral Richard Kempenfelt’s squadron that brilliantly took a number of prizes out of a French convoy protected by a larger fleet in the Second Battle of Ushant. She came into Portsmouth on the last day of the year, remaining at the port throughout January, and on 6 February she put out with several men of war in escort of the East India trade and in company with Commodore Sir Richard Bickerton’s squadron that was sailing to reinforce that station, prior to returning to Spithead.

In June 1781 the Renown sailed in company with the Diomede 50, Captain Thomas Lenox Frederick, from St. Helens with a large convoy for New York, collecting victuallers from Cork, and narrowly escaping capture by the Brest-bound Franco / Spanish fleet of Luis de Cordova and the Comte de Guichen which had ravaged Vice-Admiral John Campbell’s Newfoundland convoy fleet. Upon learning of a threat to his own convoy, Henry put into Halifax in the second week of August pending the arrival of Admiral Hugh Pigot’s Leeward Islands fleet at New York. Remaining in North American waters, he captured the rebel privateer Grace on 28 October and following the peace of 1783 he flew the flag at New York of the commander-in-chief, Rear-Admiral Hon. Robert Digby, whilst the future of the loyalist population was settled. The Renown eventually arrived at Portsmouth from Halifax on 12 July 1784, from where she went around to Chatham at the end of the month to be paid off.

In April 1793, following the opening of the French Revolutionary War, Henry commissioned the Irresistible 74, which he took her out to the Leeward Islands with transports from Ireland to join Vice-Admiral Sir John Jervis at the commencement of his campaign against the French Caribbean islands in January 1794. He later commanded the Irresistible under the orders of Commodore John Ford at the capture of Port au Prince on 4 June of the same year, and he left this vessel on his elevation to flag rank on 23 October after she had arrived home with thirty sail of the Jamaica convoy in the same month following a twelve-week voyage .

Henry was further promoted a vice-admiral on 14 February 1799 and an admiral on 23 April 1808. He died aged 98, a childless widower, on 6 August 1829 at his house at Rolvenden, Kent. At the time of his death he was considered to be the father of the Navy.

An 1816 pamphlet published by Henry claimed a cure for a number of ailments, including eye cataracts, rheumatism, gout and cramp.