Lloyd was commissioned lieutenant on 13 October 1757, and he was promoted commander of the bomb vessel Infernal 8 on 26 May 1768, being one of many officers advanced on that date.

On 26 July 1769 he was appointed to the French-built sloop Hawk 10, which was fitting at Deptford, and in early September his command was in the Downs when a visiting French frigate refused to lower her colours to the British men-of-war in the anchorage, as was customary. The senior officer present, Captain John Hollwall of the Glory 32, ordered the Hawk alongside the French frigate, and it was only after the sloop had fired two shot that the French vessel paid the appropriate respects.

On 29 September 1769 the Hawk sailed for the East Indies, and shortly after arriving, Lloyd was despatched to Madagascar by Commodore Sir John Lindsay to seek the whereabouts of the Aurora 32, Captain Thomas Lee, which had gone missing in January 1770 whilst carrying a senior diplomat, Henry Vansittart, out to India, After a thorough search the Hawk returned empty-handed, and it was assumed that the Aurora had foundered after Captain Lee had taken the controversial decision to attempt the Mozambique Channel in rough weather 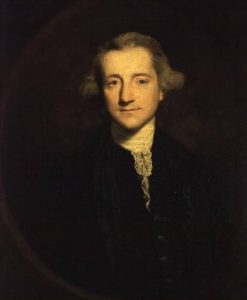 Lloyd had the sad task of confirming the loss of HMS Aurora and the renowned colonial administrator, Henry Vansittart, in 1770.

Remaining in the East Indies, Lloyd was posted captain of the fourth rate Dolphin 24 on 23 March 1771 by Commodore Lindsay, a position which was confirmed by the Admiralty on 10 April 1772. In the meantime, the new commander-in-chief in the East Indies, Commodore Sir Robert Harland, had transferred him to the Warwick 50, and that vessel came home to be paid off on 28 February 1775. Whilst at Portsmouth, the Warwick’s crew engaged in several brutal fights with sailors from the Royal Oak 74, Captain Joseph Deane, who had been a fellow captain of Lloyd’s in the East Indies.

On 6 May 1777 Lloyd joined the Pelican 24, which after serving in home waters and off the Spanish and Portuguese Atlantic coasts was sent home from Lisbon with dispatches in August 1779. Three days out from England, she fell in with a French ship which was reported to be the 44-gun East Indiaman Dauphin, a vessel which had previously seen service as a 64-gun man-of-war. A ninety-minute action at pistol shot followed before Lloyd was forced to withdraw with his masts dangerously wounded and his rigging in tatters. Reportedly, the Frenchman also suffered extensive damage and was obliged to retire to Lorient for repairs. During the engagement the Pelican lost four men killed and seventeen wounded, some of whom succumbed to their injuries, and she was taken into Sheerness to be coppered and refitted later that month.

Lloyd’s final command was the recently captured French frigate Oiseau 32, to which he was appointed on 26 November 1779, and which came out of Plymouth Dock having been coppered and refitted in March 1780. On the last day of the month, she sailed from Plymouth for Waterford to collect the trade for Newfoundland, and after arriving at the Irish port on 11 April she reached St. Johns on 11 July with an intact convoy.

The Oiseau was back in home waters by the turn of the year, and in January 1781 she embarked on a cruise from Portsmouth. She was at Spithead during February, and on 13 March she sailed for Lisbon with a small convoy. Upon leaving the Tagus with fifteen sail for Newfoundland on 26 April, she immediately ran into a Spanish squadron off Cape St. Maria and ordered her charges to disperse, which they did successfully. Returning to Newfoundland on 19 May, she captured several American privateers, these being the sloop Active 12 on 27 June, brigantine Active 14 the next day, brig Shark 14, and ship Congress 20 on 1 July. She was back at Portsmouth by December, and shortly before Christmas she joined several other men-of-war in escorting a convoy to the Downs.

On 16 June 1782 the Oiseau again departed for Newfoundland from Portsmouth with Vice-Admiral John Campbell’s flagship Portland 50 and several convoys bound for North America. Days later in a fog to the west of Lands End, the Quebec and Newfoundland convoys fell in with the allied fleet under the Comte de Guichen, and although ordered to disperse by the admiral, a significant number were taken. The Oiseau appears to have briefly returned to England before reaching Newfoundland on 1 August with four merchantmen, and she entered Lisbon with the homeward-bound convoy on 8 November. By the end of the year, she was under sailing orders at Spithead, and she put out for Plymouth with several vessels in the first week of 1783; however, with the war coming to an end she was paid off on 21 April.

Captain Lloyd did not receive any further employment and he died on 15 November 1792.