1758-82. He was born on 6 February 1758, the second son of Lieutenant-General John Manners, the Marquis of Granby, and grandson of John, 3rd Duke of Rutland. His mother was Lady Frances Seymour. He was the first cousin of Captain Hon William Clement Finch and Hon. Seymour Finch. An illegitimate cousin was Captain Evelyn Sutton.

Manners was educated at Eton from 1763-71 before joining the navy in April 1772 aboard the Panther 60, Captain Cornthwaite Ommanney, flying the broad pennant of Commodore Molyneux Shuldham and going out to Newfoundland in the following month where that officer served as the commander-in-chief. Returning home in November after a brief secondment to the Aldborough 24, Captain James Hawker, he then returned to Newfoundland with the Panther in the following two years, as was the custom.

In July 1775 he joined the frigate Enterprise 28, Captain Sir Thomas Rich, going out to the Mediterranean from Spithead during July, and remaining on that station for the next couple of years, during which period he was appointed an acting lieutenant. He left this vessel in the autumn of 1777 to return home to seek a lieutenant s commission. 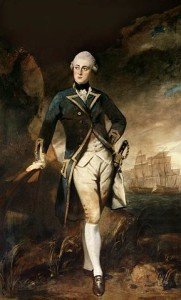 On 13 May 1778, as a beneficiary of the King s fleet review, he was commissioned lieutenant of the Ocean 90, Captain John Laforey, in which ship he was present at the Battle of Ushant on 27 July. He transferred to Admiral Hon. Augustus Keppel s flagship Victory 100 on 17 September, but in the following spring resigned his commission and went on half-pay in order to personally apply to the first lord of the Admiralty, Earl Sandwich, for a more active posting.

Accordingly in July 1779 Manners joined the newly launched Alcide 74, Captain John Brisbane, but which ship, somewhat frustratingly, was not able to leave the Thames until November from where she went around to Spithead. She was subsequently present with Admiral Sir George Rodney s fleet at the Moonlight Battle off Cape St. Vincent on 16 January 1780 and thereafter at the relief of Gibraltar.

The first lord of the Admiralty, Lord Sandwich, had already written to Rodney requesting that the highly-connected Manners be promoted as a personal favour to satisfy the young man s political allies, indeed his family had constantly badgered Sandwich for the young officer s promotion, claiming that to deny it was a slight to such a prominent family, and that Manners would resign if not given his chance. Accordingly, with seniority from 17 January 1780, Manners was posted captain of the Resolution 74 bearing the broad pennant of her previous captain, Commodore Sir Chaloner Ogle.

Upon returning to England under the orders of Rear-Admiral Hon. Robert Digby, the Resolution led the ships which first engaged the Prot e 64, which had been escorting fifteen supply ships bound for the Indian Ocean, leading to its capture on 24 February, the first such rated vessel to be taken in the war. Shortly afterwards, on 8 April as the Resolution was about to sail for North America with Rear-Admiral Thomas Graves squadron he first lieutenant, William Nowell, quelled a mutiny by punching the ringleader to the deck during a dispute about outstanding payments, one that also afflicted the other ships of the squadron.

Continuing to fly the broad pennant of Commodore Ogle, the Resolution eventually sailed with Graves squadron for North America from Plymouth in the middle of May before departing for the Leeward Islands with Admiral Sir George Rodney s fleet in November. Upon Ogle being advanced to flag rank, Manners assumed full command of the Resolution at the beginning of 1781, and he was present at the capture of St. Eustatius on 3 February where he was rebuked for opening fire on the Dutch frigate Mars after his first lieutenant, William Nowell, had allowed her to fire her cannon as a gesture of defiance after surrendering During the same year he fought at the Battle of Fort Royal on 29 April and at the Battle of Chesapeake Bay on 5 September, where he afforded excellent support to the rear, although he had a lucky escape when the peak of his hat was shot off.. Once Hood returned to the Leeward Islands the Resolution was present at the Battle of St. Kitts on 25/26 January 1782 where she was heavily engaged at the rear of the line and incurred casualties of five men killed and eleven wounded. 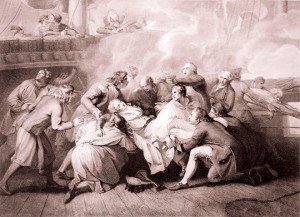 At the Battle of the Saintes on 12 April the Resolution found herself in the thick of the action from her position of third in line of battle behind the flagship. Within a half-hour of his ship opening fire Manners was struck by a ball that inflicted such serious wounds to his legs that one had to be amputated, at the same time being struck by a splinter that gouged through his chest and right arm. He was invalided to the Andromache 32 bound for England and commanded by his friend, Captain George Anson Byron, but despite being initially in good spirits he died a week later on 23 April when tetanus set in. It was mooted that his body be carried home for burial, but that proving largely impractical a conference between Captain Byron, Captain Lord Cranstoun, who was returning home with Rodney s despatches, and the Resolution s surgeon, Robert Blair, resolved that he should be buried at sea, and the relevant service was held on the early evening of 24 April.

Manners was unmarried. He had been elected MP for Cambridge in 1780 in a hard fought, often scurrilous and expensive contest held in his absence, but he never took up his seat.

A monument to his memory is in Westminster Abbey with those of his fellow captains William Blair and Alfred Bayne, who also lost their lives at the Battle of the Saintes. Manners was resolute, well respected, bright, skilled and gallant, and famed for his sense of fashion. A fair-minded disciplinarian, he quickly turned the Resolution into an excellent and esteemed ship, and he was deemed more than worthy of the early opportunities granted him by his birthright. Upon being informed of Manners death the King informed the Duke of Portland that he would rather have lost three of the best ships in his service .