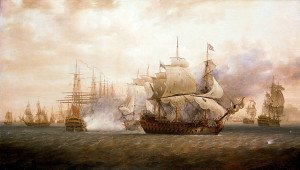 Knatchbull fought in several key battles including that of St. Kitts in 1782

In May 1769 Knatchbull was appointed a midshipman aboard the Dunkirk 60, Captain Walter Stirling, flying the broad pennant of Commodore Arthur Forrest at Jamaica. In August 1770 he removed on the same station to the Lowestoffe 32, Captain Robert Carkett, as her acting second lieutenant, and when he was officially commissioned lieutenant on 9 November 1770 he was listed as belonging to the Dunkirk, although by 1771 he was back with the Lowestoffe and Captain Carkett. In March 1772, whilst still on the Jamaican station, he joined the schooner Earl of Northampton as her commander. In the early part of 1773 he returned to England aboard the Achilles 60, Captain Richard Onslow, which vessel was paid off in April.

Knatchbull was promoted commander on 11 August 1779, and having succeeded Captain Walter Stirling aboard the Gibraltar 80 after his old commander had gone home with despatches following the capture of St. Eustatius on 3 February 1781 he was posted captain on 13 May. He thereafter flew the flag of Rear-Admiral Francis Samuel Drake and saw action at the Battle of Fort Royal on 29 April before transferring with that officer to the Princessa 70. He subsequently fought at the Battle of Chesapeake Bay on 5 September where his ship suffered casualties of six men killed and eleven wounded, at the Battle of St. Kitts on 25 January 1782, and at the Battle of the Saintes on 12 April. The Princessa sailed for North America with Admiral Hugh Pigot s fleet in July, returning to the Leeward Islands towards the end of the year by which time Captain Lambert Brabazon had assumed command. Knatchbull returned to England in command of the Nymphe 32, which was paid off in June 1783.

Having resigned from the service he did not see any further employment, and he died on Christmas Day 1826.

He married his first cousin, Frances Knatchbull, the daughter of Major Norton Knatchbull, on 31 July 1785 but did not have any issue. He inherited Babington House, near Frome in Somerset, which was extended under his occupancy in the 1790 s.