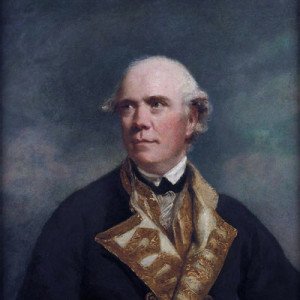 Hill spent most of his later years in the service as the flag-captain of Admiral Hon. Samuel Barrington

Following six years’ service in the East India company, Hill was commissioned lieutenant on 31 March 1760, and from April 1764 to May 1765 he served aboard the Achilles 60, Captain Lord William Campbell.

He was promoted commander on 18 March 1777, but in November his command, the recently refitted armed ship Earl of Bute, foundered in the Gulf of Florida.

Hill was posted captain on 28 January 1778 and became flag captain to the newly promoted Rear-Admiral Hon. Samuel Barrington aboard the Prince of Wales 74, which sailed for the Leeward Islands from England in May. He fought at the Battle of St. Lucia on 15 December, and at the Battle of Grenada on 6 July 1779. During the latter engagement Barrington was wounded and Hill returned home with him aboard the Ariadne 20, Captain Thomas Pringle to arrive in September.

In February 1780 he was appointed to the Barfleur 98, which was fitting out at Portsmouth as the flag ship to Vice-Admiral Barrington who had accepted the position of second-in-command of the Channel fleet. After participating in the campaign of June-December he left her in September when his patron was obliged to resign his position.

With the change of government in 1782 Hill commanded the Britannia 100 from 7 April as flag-captain to the reinstated Barrington, being present at the relief of Gibraltar on 18 October and the action off Cape Spartel. He paid the vessel off at Portsmouth in March 1783 following the end of hostilities.