1750-84. He was born in Clitheroe, Lancashire, and baptised on 13 July, the second son of the Reverend James King, a local curate, and of his wife, Anne Walker. His younger brother was Walker King, the bishop of Rochester from 1809. 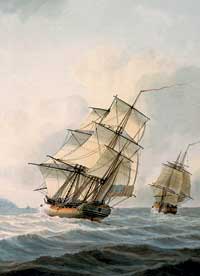 After an education at Clitheroe Grammar School King joined the navy in November 1762 aboard the Assistance 50 commanded by his relative, Captain William Norton, moving shortly afterwards with that officer to the yacht William and Mary. Further service came aboard the Gibraltar 20, Captain Richard Braithwaite, which went out to Newfoundland in June 1766, and with the same officer aboard the Liverpool 28, which also sailed for Newfoundland in May 1767. During March 1768 he joined the Guernsey 50, Captain James Chads, going out to Newfoundland with the broad pennant of Commodore Hugh Palliser, which vessel returned home at the end of the year.

He was commissioned lieutenant on 10 January 1771, sailing for the West Indies as a junior lieutenant aboard the Cambridge 80, Captain Thomas Graves, which vessel was paid off in May 1771 at the end of the Falklands Islands dispute. In 1773 he travelled to Auxerre in France to join his brother, following which he visited Paris and later Oxford to undertake scientific studies.

King was specially selected to serve aboard the Resolution as her second lieutenant during Captain James Cook s third voyage of discovery in 1776-7, and he witnessed and recorded the circumstances of that officer s death. He later assumed command of the Resolution s consort Discovery in August 1779 following Commander Charles Clerke s death, and he brought her home in October 1780. As a reward he was posted captain with seniority from 3 October 1780.

He commissioned the new Crocodile 24 in April 1781, serving in the Downs and with the Channel fleet during the campaign of June-November, during which period he captured the American privateer Hercules 20 on 16 October. In March 1782 he commissioned the new Resistance 44, taking a large part of the Crocodile s crew with him, and in conveying the trade to Jamaica he amazed many of the merchant captains by making a landfall at Barbados that was based solely upon lunar observations. On 2 March 1783 off Turk s Island in the West Indies, being in company with the Duguay Troin 14, Commander Benjamin Hulke, he captured the French frigate Coquette 28, commanded by a nephew of the Comte de Grasse.

Suffering ill-health, King returned to England aboard the frigate Diamond 32, Captain Bartholomew Rowley, and after publishing A Voyage to Pacific Ocean in June 1784 he died of tuberculosis on 16 November at Nice.

A well educated man and an effective communicator who was well known in London circles, he was made a Fellow of the Royal Society in 1782, was an expert astronomer, and took a keen interest in politics. He kept a substantial journal during his voyage with Captain Cook which allowed him to publish his account of the voyage.