Rogers was commissioned lieutenant on 26 August 1789, and after distinguishing himself at the capture of Martinique during the Leeward Islands campaign of 1794 he was promoted commander on 25 March of the bomb Vesuvius. This vessel returned to Portsmouth in September with a convoy in the company of the Undaunted 28, Captain Edward Browne, but having parted from the Vengeance 74, Captain Richard Incledon, during violent storms on the Newfoundland Banks. The Vesuvius was paid off in October.

After a period on the beach, Rogers commanded the fireship Incendiary 8 in the Channel Fleet from July 1795 for a month, and upon news of his brother Josias’ death in the West Indies reaching home he was posted captain on 10 August, whereupon he went on half-pay.

In April 1797 he was appointed to the frigate Mercury 28, sailing that month for Halifax and later serving on the Lisbon station where he captured the privateers Benjamin 16 on 5 January 1798, Les Trois Soeurs 16 ten days later, and Constance 12 ten days after that. After going out to Newfoundland in June, the Mercury returned to Portsmouth in January 1799, and following a refit she undertook another voyage to Halifax with the trade in June. She subsequently entered St. Johns, Newfoundland, with a Spanish letter-of-marque in her possession, and she returned to Portsmouth via Lisbon at the end of January 1800 with a convoy which had departed St. Johns on 20 November, but had been dispersed in a storm with several vessels falling prey to French privateers. 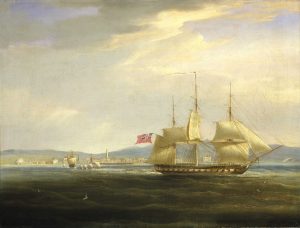 Cruising thereafter in the Western Approaches and home waters, Rogers took several prizes including the Cherbourg privateer Egyptienne 15 off the Isle of Wight on 5 February 1800 before returning to Portsmouth in mid-April. The Mercury then went out to Minorca in May with the Duke of Orleans, otherwise known as the future King Louis Philippe I, and his two brothers who were seeking to join a French Royalist army. Remaining in the Mediterranean, on 20 January 1801 the Mercury captured the French corvette Sans Pareille 20 in passage for Egypt laden with arms and ammunition, having a few days before taken fifteen ships laden with wine and brandy out of a convoy sailing from Cette to Toulon. All the prizes were sent into Minorca. Whilst attached to Rear-Admiral Sir John Borlase Warren’s squadron, the Mercury also participated in the search for Rear-Admiral Honoré Ganteaume’s force which had broken out from Brest in January.

On 25 May 1801 an audacious attempt to cut the captured bomb Bulldog out of the harbour at Ancona on the Italian Adriatic coast failed when, after bluffing their way aboard, Rogers’ men managed to get her under way but were forced to abandon ship when attacked by a number of French boats. Two men were killed and four wounded during this daring enterprise. In June his boats cut out the privateer Tigre from the Tremite Islands in the Adriatic, braving fire from the vessel’s crew ashore to do so, and Rogers was subsequently the senior officer of a small squadron from which the Champion 24, Captain Lord William Stuart, re-took the Bulldog near Gallipoli on 17 September 1801. With the French Revolutionary War drawing to an end, the Mercury arrived at Portsmouth from Malta in early April 1802, and after performing quarantine she was paid off.

In March 1803, upon the commencement of the Napoleonic War, Rogers commissioned the Utrecht 68 at Chatham for the flag of Rear-Admiral Edward Thornbrough, sailing for the Nore in April and then heading for Helvoetsluys to monitor the Dutch fleet. His command was back at Sheerness in early May having received such damage in severe gales that her crew were reportedly to be turned over to the Victory 100. By early June she was nevertheless ready for sea, and on the 13th she received the flag of Admiral Lord Keith, the commander-in-chief of the expanded Downs and North Sea station. Eventually reaching the Downs on 4 July, she then took aboard the flag of Keith’s second-in-command, Rear-Admiral Robert Montagu, and she remained on that station for the next few months.

In early September 1803 Rogers transferred to the Princess of Orange 74, remaining in the Downs and North Sea station under the overall orders of Lord Keith, and being sent to join the squadron blocking the Texel in December. After a brief visit to Yarmouth the Princess of Orange was stationed off the Texel at the turn of the new year in freezing conditions, and in early March 1804 she returned briefly once more to Yarmouth to take on supplies before heading back for her station in sight of the Dutch fleet. On 9 July she entered Sheerness prior to reportedly heading up to Chatham to undergo lengthy repairs, and although she was back off the Texel by the latter part of August, she then came back to Sheerness having sprung her rudder. On 24 September, with repairs completed, she sailed for the Texel once more where she remained for the next few months.

On 27 November 1804 the Princess of Orange arrived at Portsmouth, and with Christmas approaching Rogers raised the flag of Rear-Admiral William O’Brien Drury, who had been appointed the second-in-command on the Irish station. Sailing on 22 December, they were off Bantry Bay six days later, but with the Trafalgar Campaign gathering pace the Princess of Orange transferred to the Channel fleet in early 1805. On 6 August she reached the Downs from Plymouth from where she sailed for Yarmouth, and a brief tour of duty with the fleet blockading the Texel followed before she was recalled to the Downs to join Admiral Lord Keith’s fleet once more. On 2 September she reached Sheerness with the intention that she would be paid off and her men turned over to the Powerful 74, Captain Robert Plampin, but with the Trafalgar Campaign now in full swing it appears that these orders were counter-manded, for she was soon back with Rear-Admiral Thomas Macnamara Russell’s’ North Sea squadron. In January 1806 concerns were expressed for her safety, but following her overdue arrival at Yarmouth she sailed for Sheerness to enter port on the 30th and be paid off towards the end of February.

In June 1806 Rogers was appointed to the Kent 74, which was reputedly one of the largest vessels of that class, and upon sailing for the Channel Fleet she joined Rear-Admiral Charles Stirling’s squadron. In August she formed part of a detachment under the commander-in-chief, Admiral the Earl of St. Vincent, which made for Lisbon, and by November she was with Commodore Richard Keats’ squadron off Rochefort, from whom she parted towards the end of December in strong gales. On 9 March 1807 she arrived at Plymouth to be docked and refitted, bringing with her crew members from the Atalante 16, Lieutenant John Bowker, which had been wrecked on the French coast, and she briefly flew St. Vincent’s flag before going into the harbour.

At the end of May 1807 the Kent made for Rame Head to rendezvous with the Montagu 74, Captain Robert Waller Otway, and thence to proceed to the Mediterranean with dispatches for Vice-Admiral Lord Collingwood. Having joined the fleet, the Kent sailed with the commander-in-chief for the Dardanelles in July, and she remained with Rear-Admiral George Martin in support of the British Embassy to Turkey until 19 October. By December she was serving under the orders of Vice-Admiral Edward Thornbrough in the Mediterranean, and she was involved in operations following Vice-Admiral Honoré Ganteaume’s breakout from Toulon on 7 February 1808. By July the Kent was to be found at Minorca, and on 1 August in company with the boats of the Wizard 16, Captain Abel Ferris, her boats cut out ten coasters and a French gunboat from the Italian town of Noli to the west of Genoa, despite the presence of French troops and artillery. Following her cruise, in which up to two dozen vessels were taken or destroyed, she rejoined the fleet off Toulon, and on 16 November she was docked at Gibraltar to repair damages incurred in the action at Noli, and in particular to remove twelve round-shot from her hull.

After further service with the Mediterranean Fleet during 1809, the Kent arrived at Gibraltar on 5 August to be placed under a strict quarantine, with reports stating that twelve of her crew had died and two hundred been rendered sick from a pestilence caught from a French prize taken on the coast of Africa. Having been banned from entering any Spanish port, she was at Portsmouth by10 September, from where it was announced that she was not as sickly as had earlier been represented. As a reward for their long service and good behaviour four hundred of her crew were allowed a fortnight’s leave of absence, and so many wished to make their way to London that the coaches carrying them became vastly overloaded; indeed, one carrying twenty-five men broke down leaving the occupants to complete their journey in fish carts.

On 14 March 1810 the Kent left Portsmouth for the Tagus giving passage to Rear-Admiral Sir Richard Keats, and on 13 December Rogers was in command of a squadron off Palamos, Catalonia, when thirty-three men were killed, eighty-nine wounded and eighty-six taken prisoner in the course of Captain Francis Fane’s attempt to destroy a French convoy. In his official letter to the commander-in-chief, Admiral Sir Charles Cotton, Rogers opined that he could not reproach himself for authorising the disastrous attack, as his conduct would have been censured had he not undertaken it.

The Kent was with the Mediterranean Fleet during the skirmishes with the Toulon fleet in July-November 1811, and in August she was at Port Mahon receiving a new main-mast after being struck by lightning, an event which had caused the death of one man and wounded several others. During the summer of 1812 she continued to serve with the fleet off Toulon until she arrived at Plymouth on 23 December with a convoy, having discovered a drifting and plundered merchant brig nine days earlier with only a dog aboard her. She was then taken into the harbour to be surveyed, and upon leaving this vessel Rogers does not appear to have been employed thereafter.

In early March 1813 he attended a levee held by the Prince Regent at Carlton House, he was promoted a rear-admiral on 4 June 1814, and he died three months later on 29 September at Tours in France whilst visiting his niece, the wife of Captain Sir Edmund Lyons. His body was returned to Lymington where he was buried on 25 November.

In his will Rogers bequeathed £1,000 in trust to alleviate the poor of the borough of Lymington. It appears to be unlikely that he was ever married.