Dickson was commissioned lieutenant on 31 December 1755 and saw a great deal of his early service under Admiral Sir George Pocock. On 10 May 1765 he was promoted commander of the Swallow 10, and on 2 May 1766 was posted captain of the Jersey 60, Commodore Richard Spry, having joined that ship the month before with the rank of commander. Serving in the Mediterranean where Spry was the peace-time commander-in-chief, he retained that command for the usual period of three years prior to being paid off in December 1769.

He thereafter remained unemployed for the next ten years until appointed to succeed his brother in command of the Greyhound 28 on 25 September 1779, that frigate having recently returned from North America. After sailing from Portsmouth at the end of the year with Admiral Sir George Rodney’s fleet, the Greyhound was detached with the West Indian trade and transports on 4 January 1780, thereby missing the Moonlight Battle off Cape St. Vincent on 16 January, although she was present at the Battle of Martinique on 17 April. 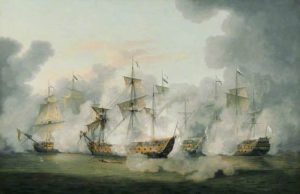 Dickson fought at the Battle of Martinique in 1780

As a consequence of Rodney’s reorganisation of the fleet following the Battle of Martinique, Dickson was placed in temporary command of the Terrible 74 from 20 April 1780, and he served in the subsequent Leeward Islands campaign, including the fleet skirmishes in May where his ship lost three men killed and nine wounded. After the death of Captain Thomas Watson in the action with the French on 19 May he was appointed to the Conqueror 74, sailing for Jamaica with three other sail of the line to collect a convoy numbering one hundred and ten ships. Departing Bluefields in early September, the homeward-bound voyage coincided with the Great Hurricanes during October that decimated the fleet, so that by the time the Conqueror reached Portsmouth on 15 November she only had in company the Magnificent 74, Captain John Elphinstone, and thirty vessels from the convoy. During the voyage she had lost sixty men to sickness, her mainmast had gone by the board, and she had required a hundred men to bale her out every day after her pumps had become choked. She had also collected what was described as ‘a good many men from the sea’ whose ships had foundered. In early December she sailed for Plymouth to be docked, there being no room for her at Portsmouth.

In the late spring of 1781 Dickson was appointed to the newly commissioned Sampson 64 which was launched at Woolwich in May, and which at the end of July took on her ordnance at Blackstakes. Departing Harwich for the Dutch coast on 8 August, just three days after the Battle of the Doggersbank, she was employed in the North Sea under Vice-Admiral Hyde Parker before entering Harwich in September. She then proceeded to the Nore prior to joining Commodore Hon. Keith Stewart’s squadron off the Texel. By the beginning of December she was at Elsinore to collect the Baltic convoy, and she returned to the Yarmouth Roads with one hundred and seventy vessels before Dickson left her in January 1782 to be replaced by Captain John Harvey.

In September 1782 he was appointed to the new Standard 64 which was building at Deptford, and which was launched in early October to be fitted out at Woolwich. She arrived in the Downs from the Thames on 24 January 1783 but did not see any active service before the war ended that month. Instead she began guard ship service at Plymouth. This was a largely uneventful commission, although during the spring of 1784 she broke from her moorings and got on shore, and on 19 December 1785 the boatswain of the sloop Fortune by the name of Moffat was hung aboard the Standard in the Hamoaze after being condemned to death for striking a lieutenant. The Standard was paid off in September 1786.

By his first wife, Jane Collingwood of Alnham, Northumberland, who he had married on 11 November 1765 at Morpeth, he had issue Captain William Dickson, who died in 1795, Rear-Admiral Sir Archibald Collingwood Dickson, and General Sir Alexander Dickson, in addition to two younger daughters and an older son who did not survive childhood. His first wife died on 12 April 1782 and he had a further five children by his second wife, Elizabeth Charteris, whom he married in 1786. His residence was at Sydenham House, Kelso.