Sayer joined the service aboard the Phoenix 36, Captain George Anson Byron, which frigate sailed for India with the Cornwallis Expedition in February 1789. He saw service in the war against Tippoo Sahib, and in the same vessel under the command of Captain Richard John Strachan in her peacetime defeat of the French frigate Résolue 32 on 19 November 1791.

Having been promoted lieutenant on 24 August 1793, he was employed aboard the Carysfort 28, Captain Francis Laforey, and was present at her capture of the French frigate Castor 32 on 29 May 1794. Thereafter he saw duty as the first lieutenant to Laforey aboard the Aimable 32, which sailed for the Leeward Islands in the early summer of 1795, and continuing on that station, the Beaulieu 40 and the Ganges 74.

On 11 May 1796 Sayer was promoted commander of the French prize brig Lacedaemonian 12, serving with her at the reduction of St. Lucia during Rear-Admiral Hugh Christian’s April – June campaign. After a short stint with the sloop Albacore 16 at Jamaica he had to return to England, as the Admiralty had confirmed his commission for purposes of rank only. Once home, he served with the flotilla of vessels which were intended for use against the mutineers at the Nore following the outbreak of the mutiny on that station on 12 May 1797. 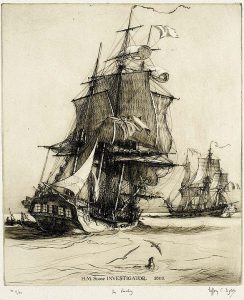 From the summer of 1798 he commanded the Xenophon 20, an ex-merchant collier rated as an armed ship which was fitting out at Deptford, and which would later be renamed the Investigator and earn fame for her exploration work in Australia under Commander Matthew Flinders. At the end of the year, she took a convoy from the Thames to Leith, and she was at the latter port again in February 1799 after going out on a cruise. She departed at the end of the month with a convoy to enter Yarmouth where she remained for the next few weeks, and on 18 March she sailed from Hull with the Greenland and Davis Strait whalers. Returning to the Thames, she left Sheerness towards the end of April for the Elbe with a convoy, and on 10 June sailed once more from Sheerness with a convoy for Hamburg. On 1 July she entered Yarmouth with a convoy, and on the 23rd reached Sheerness before setting off on 11 September for the Elbe with another convoy.

The monotony of the Xenophon’s convoy duties was temporarily alleviated on 1 October 1799 when she took custody at Hamburg of the Irish Nationalist James Napper Tandy and three other prominent state prisoners. Although she was able to make her way downriver to Cuxhaven, contrary winds prevented her sailing from that port until the 12th, and after encountering rough weather in the North Sea she only arrived at the Nore sixteen days later. Here before a large crowd of onlookers, she disembarked the prisoners and handed them over to the Sheppey Yeomanry for their conveyance to Newgate Prison in London. On 14 December the Xenophon sailed with another convoy from Sheerness to the Elbe and the Weser, but she put back a week later after springing her bowsprit and losing her anchor and cables in heavy winds.

In February 1800, Sayer was appointed to the sloop Inspector 16 on the North Sea station following the death of her commander, Captain Charles Lock, and he took Brigadier-General John Stuart to Cuxhaven in April. His vessel later cut out several merchant vessels from a port in Friesland during August, sending them into Yarmouth, and in October a party took possession of a signal station near the Texel by driving the Dutch guard away and inflicting casualties of one man killed and a few wounded. In so doing they were able to come away with the signal book and various flags. In November a large Dutch Indiaman laden with a valuable cargo was captured in the Ems and carried into Cuxhaven, and the Inspector was back at Yarmouth on 18 November. Three days later she sailed with the Prince of Orange and his suite for Cuxhaven, and at the end of the year she was sent to join several other vessels in seeking out an enemy privateer that had been active off Scarborough. By 28 January 1801 the Inspector was at Sheerness, and Sayer was at last posted captain on 14 February, whereupon he was obliged to leave his command.

He appears to have remained unemployed until 2 January 1805, when he took command at Portsmouth of the recently purchased Newcastle collier Proselyte 28, his appointment being largely due to the fact that the health of the recently promoted Captain George Hardinge was considered too fragile for the West Indies service for which that vessel had been detailed. Three days later Sayer embarked General George Beckwith, the governor-designate of St. Vincent, and on the 7th sailed with a convoy of over one hundred and fifty merchantmen, initially heading for Cork, which she reached on 22 January. With over three thousand troops under her charge, she then set off across the Atlantic to the concern of the City of London, for by now the French Rochefort squadron was known to be at sea. In the event, all the ships arrived safely at Barbados on 10 March, and Sayer was warmly praised by the authorities on the island for his attentiveness to the convoy.

Remaining in the Leeward Islands, he succeeded Captain Murray Maxwell aboard the Galatea 32 during the summer of 1805 in order for that officer to return home. On 18 August 1806 his barge was sent in to destroy a privateer near Puerto Cabello on the Spanish Main, and the Galatea also cut out several Spanish vessels from Barcelona on the same coast on 11 October, in addition to capturing the French schooner Réunion 10 off Guadeloupe on 12 November. 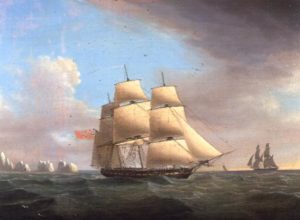 On 21 January 1807, the Galatea came upon the poorly manned French corvette Lynx 16 off Caracas, whose crew had some sixty pressed foreigners aboard in place of men who had died. The Lynx was able to use her sweeps to escape the Galatea in the poor winds, but Sayer sent off six boats in pursuit under the command of a one-legged officer, Lieutenant William Coombe, and the French vessel’s capture was eventually completed on the fourth boarding attempt, although only with the significant loss of nine men killed and twenty-two wounded. She was later bought into the Navy as the Heureux. The Galatea was subsequently present at the subjugation of the Danish West Indian possessions from 21-25 December, and after returning to Portsmouth in a most leaky condition with the Leeward Islands convoy on 11 January 1809 she was paid off and broken up.

In November 1809, Sayer was appointed to the newly commissioned Woolwich-built frigate Leda 36 at Deptford, and on 16 February 1810 she arrived at Portsmouth from the Downs. After going out to Cadiz with a troop convoy, she returned to Portsmouth with Vice-Admiral John Child Purvis as a passenger on 10 May. Next sailing for the East Indies with a convoy on 9 June, she voyaged from Calcutta to Madras in January 1811 and actively participated in the capture of Java on 18 September. Such were his exertions in leading a division of five hundred seamen ashore that Sayer went down with a fever at the end of the campaign and for several days his life was despaired of. He remained as the senior officer at Batavia whilst his condition continued to improve, and in June 1812 he was able to advise the government in Calcutta that the Dutch possessions on the island of Timor had surrendered.

On 27 July 1812 the Leda arrived at Madras from Java, and in August Sayer presided over the court-martial that dismissed Captain William Butterfield from the command of the Malacca 36 for exceeding the limits of his authority in sending home the Minden 74, Captain Edward Wallis Hoare, with a convoy. Sayer was later sent to Penang to reportedly ‘do away with the naval establishment’ there, but by January 1813 he was back at Calcutta, from where he sailed for Madras to depart on the 17th. It appears that the Leda was cruising in the Straits of Sunda in early 1813, and in July she was sent with several vessels to assist an East India Company force in subduing the Sultan of the Sambas in Borneo, after that independent ruler had wreaked havoc on the British trade and repulsed an earlier attempt to bring him to order.

On 15 October 1813 the Leda arrived at Penang from Malacca, and she sailed six days later for Trincomale. In December she rescued the crew of a brig which had to be scuttled off Ceylon, but then she appears to have been delayed at sea, as an expectation that she would take a convoy home to England was negated by the fact that she had been missing for so long amidst concerns for her safety. She had in fact been heading for Bombay where she arrived safely.

In March 1814 the Leda was cruising off Ceylon, on 31 May she sailed from Trincomale for Madras to arrive four days later, and on 15 June she sailed from the latter port on a cruise to re-enter Trincomale once more. Continuing with this pattern, she put out from the Sinhalese port on 24 July, by 14 September she had arrived at Madras from a cruise, and on 4 October she reached Trincomale before sailing out again on the next day.

At the end of December 1814, the Leda was at Trincomale with orders to take a convoy home to England, but events took a turn for the unexpected when news was received of the death of the commander-in-chief of the East Indies station, Vice-Admiral Sir Samuel Hood, at Madras on 24 December. As the senior officer on the station, Sayer assumed the role of commander-in-chief pending the arrival of Hood’s successor. During January 1815 there was some expectation that he would transfer into Hood’s flagship, the Minden 74, with Captain George Henderson removing into the Leda, but instead Sayer preferred to remain with his frigate and Henderson transferred into the Malacca to take Hood’s widow and the convoy home.

On 21 January 1815 the Leda sailed from Pointe de Galle, and in February she was off the Malabar Coast whilst reportedly on her way to Bombay. By 6 March she was back at Pointe de Galle from where she sailed on the 24th for a brief cruise before putting back and then sailing once more on 10 April. Following the arrival in the summer of Hood’s successor, Rear-Admiral Sir George Burlton, Sayer was dispatched to the China Sea to counter any American threat, although with the War of 1812 coming to an end the Leda’s greatest danger arose when she was badly damaged in a typhoon. On 7 October she touched at Manila, where she appears to have embarked silver bars totalling 200,000 guineas, and after reaching Penang on 7 December she left for Calcutta the next day. Meanwhile Admiral Burlton had died on 21 September, and thus Sayer was obliged to again temporarily assume the role of commander-in-chief.

In February 1816 the Leda was expected at Madras from Calcutta but being in urgent need of docking she passed that port and headed for Trincomale to be hove down for repairs. On 26 July, with Rear-Admiral Sir Richard King having arrived at Trincomale to assume the command of the East Indies station, the Leda sailed from the Sinhalese port for England. When she arrived at Portsmouth in November it was with just seventeen of her original crew, the remainder having died, been invalided home, or transferred to other vessels whilst she had been in the East Indies. Shortly afterwards she was ordered around to Sheerness to be paid off.

Sayer was nominated a C.B. and awarded a gold medal for his services in India, but he did not see any further service. He was promoted rear-admiral on 22 July 1830, being presented to the King at a grand levee shortly afterwards, and he died on 29 April 1831 in Craven Street, the Strand, to be interred in the family vault in St. Clement’s Church, Sandwich, Kent, where there is a memorial to him.