Died 1822. He was the son of a surgeon, Richard Boger, of St. Germans in Cornwall.

Boger was commissioned lieutenant on 23 March 1776; in August 1778 he was offered a position aboard the Victory 100, flagship in the Channel of Admiral Hon. Augustus Keppel, and in May 1780 he commissioned the cutter Pilote 14 for service in the Irish Sea.

He was promoted commander of the bomb Vesuvius 8 on 2 April 1782, briefly commanded the Foudroyant 80 for Captain Sir John Jervis at Portsmouth during May, and was posted captain of the Ocean 90 on 6 July. This vessel initially served as the flagship of Vice-Admiral Mark Milbanke in the Channel, and later at the Relief of Gibraltar and the Battle of Cape Spartel in October before being paid off in January of the following year. 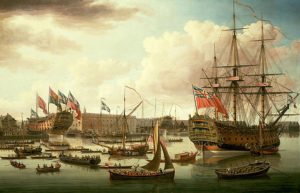 Boger was the long-term captain of the Cambridge, depicted here to the left at her launch

Boger subsequently commanded the Blenheim 90 with the flag of Admiral Milbanke at Plymouth from May 1783 until she was paid off in September 1784. During the Dutch Armament he commissioned the new Hannibal 74 for the flag of Rear-Admiral Sir John Jervis and the captaincy of John Rogers in October 1787, paying her off two months later, whereupon he spent some time out of employment.

He commanded the ancient Plymouth based guardship, receiving ship and flagship Cambridge 80 from the outbreak of hostilities with France in 1793 until he retired ashore in April 1799, flying the flags of Rear-Admiral Rowland Cotton in 1794, Vice-Admiral Sir Richard King from 1795-9, and briefly Rear-Admiral Sir John Orde in 1797.

Contemporary sources appear confused as to his family details. It seems that his first wife died in September 1804 and that in August 1806 he married a widow, Mrs Drake, at St. Andrew s Church, Plymouth. She died in 1818. A daughter attributed to him as his only child married in Plymouth during 1799, another woman by the name of Marie was described as his only daughter when she married Mr J W Dupre in Exeter in July 1803, and Captain Coryndon Boger, commander of the Fowey Sea Fencibles, was described as his second son when he died at the admiral s house in May 1804.