c1728-91. The youngest and fourth surviving son of John Houlton of Bristol, and of his wife, Susannah Watts, his family was long-established in the parish of Grittleton, Wiltshire.

Houlton was commissioned lieutenant on 28 June 1756 and served in Commodore John Moore’s expedition to the Leeward Islands from 1758 aboard the pennant ship Cambridge 80, Captain Thomas Burnet. On 29 January 1759 he was promoted commander of the sloop Bonetta 10 at Guadeloupe in succession to Captain Richard King, and although newspaper reports in May stated that she had founded on a voyage home with dispatches from Guadeloupe, this vessel arrived at Portsmouth on 4 August in the company of the Roebuck 44, Captain Thomas Lynn, and with forty-six troop transports in convoy. Shortly afterwards she was paid off.

He was posted captain on 4 November 1761, being appointed briefly to the Mercury 20, which was in Portsmouth Harbour during the following month. Shortly afterwards, in January 1762, he sailed from England in command of the Enterprise 40 for North America with despatches for Major-General Sir Jeffrey Amherst, and with instructions to provide an escort for the conveyance of troops to wherever Amherst ordered. On 1 April he arrived at New York with the news that Britain had declared war on Spain, and upon sailing from that port with a troop convoy on 30 June he opened further orders from the Admiralty off Sandy Hook which instructed him to proceed to the Caribbean, where it had already been decided to launch an attack on Havana. After joining Admiral Sir George Pocock off Cuba on 8 August he then returned to New York with a convoy of fifteen transports on 5 September. 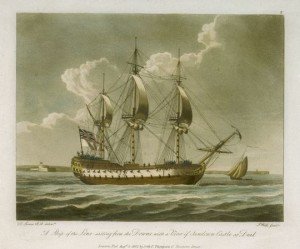 During the latter part of September 1762 he returned Major-General Amherst to New York from Newfoundland after the French had been driven from their temporary occupation of the colony, and he remained with the Enterprise until she was paid off in January 1764 having returned to Spithead on New Years’ Day from North America via Cadiz and Lisbon. In December 1764 he lost a case at the Guildhall brought by an American by the name of John Monro who claimed that he had been confined aboard the Mercury at Nova Scotia against his will for six months.

Upon leaving active service in 1764 Houlton retired to his estate at Seagry, Wiltshire, for the next fifteen years, but he returned to the colours in the American War of Revolution by joining the Montagu 74, which had been launched at Deptford in August 1779. Sailing with Admiral Sir George Rodney’s fleet, he commanded this ship at the Moonlight Battle off Cape St. Vincent on16 January 1780, forcing the surrender of the Diligente 70 and managing to tow her into Gibraltar despite atrocious weather. The Montagu then proceeded to the West Indies with Rodney, and at the Battle of Martinique on 17 April 1780 she suffered casualties of nine men killed and twenty-eight wounded, the latter figure including Houlton himself. He was somewhat compensated by being one of a handful of captains publicly praised by Rodney, although his first lieutenant was accused by the commander-in-chief of withdrawing the ship from the action when Houlton had been injured. This officer was later acquitted on the simple basis that the Montagu had been disabled. Houlton commanded the same ship in the remainder of the Leeward Islands campaign from May-July, including the fleet skirmishes in the former month.

Continuing to serve in the Leeward Islands after the bulk of the fleet had sailed for New York, the Montagu was driven out to sea from her anchorage at St. Lucia during the Great Hurricanes of October 1780 and totally dismasted, having eight feet of water in the hold and losing six men. Houlton later served at the reduction of St. Eustatius on 3 February 1781 and fought at the Battle of Fort Royal on 29 April, but he left the Montagu shortly afterwards to return home because of his wounds and poor health.

In 1785 he succeeded his brother in the ownership of Grittleton, Wiltshire, whereupon he sold his estate at Seagry. During August 1790 he was appointed to the Royal Sovereign 100 when the fleet was recommissioned on account of the Spanish Armament, but he left her after being promoted rear-admiral on 21 September.

Admiral Houlton died aged 62 and unmarried on 26 January 1791 at Grittleton, leaving his estate to his great-nephew.