1747-1829. An ancestor of Lord Lovat on his father s side, and of the Marquis of Hamilton on his mother s side, he was born in Lerwick in the Shetland Isles, the son of Hugh Fraser, a surveyor of customs, and of his wife, Jane Linning.

Fraser first went to sea in 1760 aboard the Fly 10, Commander George Gayton, being present at the reduction of Belleisle in 1761 and serving thereafter in the Basque Roads. Following the end of the Seven Years War in 1763 he returned to his education in Scotland, and in 1768 rejoined the navy as a midshipman aboard the Mermaid 28, Captain James Smith, serving off North America for three years. He was then appointed an acting-lieutenant of the Bonetta 16, commanded by an old shipmate from the Mermaid, Matthew Squire, and returned to England to be paid off in August 1772. 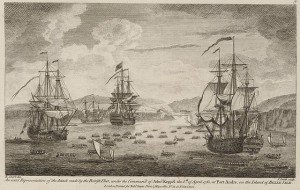 After passing his lieutenant s examination in March 1773 he joined the Royal Oak 74, Captain George Balfour, being present when the fleet was reviewed at Spithead by the King. In 1774 he moved as an acting-lieutenant to the Scarborough 20, Captain Andrew Barkley, which vessel went out to North America.

As the war with the colonies took hold he removed into the Canceaux 6, Lieutenant Henry Mowatt, and was landed ashore at Falmouth, Massachusetts under a flag of truce to request the lying down of arms by the rebels. When this request was refused the Canceaux and three other small vessels bombarded the greater part of the town whilst Fraser landed at the head of a party of seamen and marines to torch the rest, a feat he accomplished despite the musketry of the Americans who had retreated to the outskirts.

He afterwards removed to Rear-Admiral Molyneux Shuldham s flagship, Chatham 50, Captain John Raynor, whose boats he commanded at the occupation of Long Island and New York from 3 July 1776. He returned to England at the end of the year and was commissioned lieutenant on 18 July 1777, being appointed to the Hector 74, Captain Sir John Hamilton, which ship was attached to Admiral Hon. Augustus Keppel s fleet. On 17 June 1778 the Hector detained the French frigate Licorne 32 which Fraser took into Plymouth, and after returning to the Hector he participated in the Battle of Ushant on 27 July.

By 1780 he had become first lieutenant of the Hector which was now attached to Admiral Sir George Rodney s Leeward Islands fleet, and he was engaged in Commodore Hon. William Cornwallis action against Commodore De Ternay on 20 June. Shortly afterwards he exchanged as first lieutenant into the Conqueror 74, Captain William Dickson, which ship returned to England having been badly damaged by a hurricane at the commencement of her voyage, and with the men having to pump her out constantly over three months.

On arrival home his patron, Commodore George Johnstone, secured him the acting command of the store-ship San Carlos 50, armed en flute, in which he participated in the skirmish at Porto-Praya Bay on 16 April 1781. Shortly afterwards he became first lieutenant of Johnstone s flagship Romney 50, Captain Roddam Home, in which he returned to England, in November.

His active and varied service continued aboard the Panther 60, Captain Robert Simonton, being present at the Channel fleet s relief of Gibraltar on 18 October 1782. In the subsequent action off Cape Spartel the Panther suffered several casualties whilst Fraser had a speaking trumpet knocked out of his hand by a ball. Seeking to enhance his career prospects he then exchanged with the third lieutenant of the Ruby 64, Captain John Collins, even though he was senior to her first lieutenant, as this vessel had been ordered out to the Leeward Islands with Rear-Admiral Sir Richard Hughes squadron. During the voyage out he was able to participate in the capture of the Solitaire 64 on 6 December 1782. Still searching for the elusive promotion to commander, he joined Admiral Hugh Pigot s flagship Formidable 90, Captain James Samber, but with the peace following soon afterwards he returned home having been unable to rise above the rank of lieutenant.

From 1783-6 Fraser served aboard the Adamant 50, Captain William Kelly, the flagship of Rear-Admiral Sir Richard Hughes in the Leeward Islands, and after returning to England he was appointed first lieutenant of the Colossus 74, Captain Hugh Christian. He was finally promoted commander on 1 December 1787 and in the autumn of 1790 was appointed to the sloop Savage 16 serving at Greenock, Scotland on which station he remained until December 1792.

At the start of the French Revolutionary war the Savage joined Rear-Admiral John Macbride s squadron in the Downs, and he captured a French privateer, the Custine, on 24 February. In April, whilst commanding a squadron of small vessels, he was invited by the commandant of the garrison at Ostend to take possession of the town, and having landed five hundred marines and seamen he retained it until the 37th Regiment relived him later in the month.

On 1 July 1793 he was posted captain of the floating battery Redoubt 20, which vessel was armed with 42-pound carronades, commissioning her for the North Sea and taking his crew from the Savage with him. From July 1794 he was commanded the frigate Proserpine 28 in the North Sea and in February 1796 commissioned the brand new Shannon 32. Serving off Ireland, he took four large privateers, the Mouche 16 on 5 December 1797 in company with the Diana 38, Captain Jonathon Faullknor, the Duguay-Trouin 24 off Cape Clear on 2 February 1798, Julie 18 on 23 June 1798, and Grand Milieu 20 on 15 January 1799.

In March 1799 he moved to the Diana 38, going out to the Leeward Islands in September with a large convoy and enjoying a year s successful cruising against the enemy privateers in which he took the Medie 10 on 17 May 1799 and Industriel 6 on 13 July 1800. Suffering from yellow fever he was forced to invalid home shortly afterwards aboard the Invincible 74, Captain George Cayley, although he did not suffer the fate of that officer who died in the following January.

For some time thereafter Fraser remained unemployed before being appointed to the Dutch-built guard-ship Beschermer 54 at Harwich in July 1801. When she was paid off at the peace he was appointed to the frigate Amphion 32, serving in the preventative trade in home waters from February 1802, and in the conveyance of the Duke of Cambridge to Cuxhaven. He resigned his commission three months later for family reasons.

The Bombardment of Copenhagen 18078

He was not re-employed until 1804, when he joined the newly built frigate Weymouth 36 which he commissioned as a 44-gun vessel, and shortly afterwards he moved to the Hindostan 54. In this vessel he departed home waters in March 1805 to convey the trade out to the East Indies. On 21 April 1806, whilst bringing a convoy home in the company of the Tremendous 74, Captain John Osborn, he had the mortification of seeing his consort fail to capture the Cannoni re 40 off Natal, after that vessel had approached their convoy.

Following a short spell refitting the Prince 98 at Plymouth from the end of December 1806 and paying her off on 23 March 1807, he recommissioned the Vanguard 74 and sailed with Admiral Lord Gambier s fleet to the Baltic which bombarded Copenhagen and forced the Danish surrender on 7 September. Thereafter he remained in command of a squadron which blockaded Copenhagen and ensured the safe passage of the British trade in the Belt. At the end of November he set off for England with the last of that year s merchantmen, being partly delayed by the Danes at Kronborg and a heavy gale which obliged him to sweep up the dispersed merchantmen. Even so the latter accused him of forsaking them, although the Lords of the Admiralty investigated the affair and announced themselves happy with his conduct.

When the Vanguard was ordered back to Copenhagen in January 1808 Fraser obtained leave on account of his general and mental fatigue and instead took command of the Dundee Sea Fencibles. Here he remained for two years, at the end of which period he was appointed to the yacht William and Mary, a position he held until his elevation to the rank of rear-admiral on 1 August 1811. He was further promoted to vice-admiral on 12 August 1819.

Fraser died Sandlodge in the Shetland Isles on 29 December 1829 having served as an equerry to the Duke of Clarence. He was buried in the New Carlton burial ground, overlooking Leith and the Firth of Forth.

He married Helen (Nellie) Bruce of Sumburgh in the Shetland Isles on 6 April 1788 and had two daughters and three sons, the second of which, John, drowned when first lieutenant of the Magnet 16, Commander Ferdinand Moore Maurice, which vessel foundered in passage to North America during October 1812. His eldest son, Alexander, was employed in the Royal Engineers and his youngest son, Thomas, entered the navy in 1809, fought at the Battle of Algiers seven years later, and was posted captain in 1841.

Fraser was described as a very smart officer which was obviously a euphemism, for he was also known to be a brutal martinet, and a sadist monster . When commanding the Shannon his men pleaded with the Admiralty that he be replaced, writing that he was one of the most barbarous and one of the most unhuman officers that ever a sect of unfortunate men ever had the disagreeable misfortune of being with . His residence was given as Send Lodge in the Shetland Islands.