1764-1832. He was born on 7 December 1764 in New London, Connecticut, the youngest son of John Winthrop and of his wife, Elizabeth Sheriffe, the widow of Captain John Hay of the Army. His ancestors had long been leading members of the colonial administration.

Having been allowed to pass through the lines under a flag of truce following the death of his loyalist father, the young Winthrop joined the navy at New York in 1779 and fought at the Battle of the Saintes on 12 April 1782 aboard the Formidable 90, Captain John Symons, the flagship of Admiral Sir George Rodney.

He was commissioned lieutenant on 3 November 1790 and commanded a detached force of sailors ashore at the reduction of Martinique during the Leeward Islands campaign of 1794. After returning to England he gave evidence at the court-martial into the loss to fire of the flagship Boyne 70 at Spithead in May 1795.

Winthrop was promoted commander on 6 October 1795, commissioning the captured French brig Victorieuse 14 which took a convoy out to the West Indies in February 1796. Here he was appointed to the sloop Albacore 16, which took the French corvette Athénienne 14 near Barbados on 3 May after a six-hour chase, and during the Leeward Islands campaign of April-June he was present at the capture of St. Lucia. On 25 August he was appointed to the temporary command of the Undaunted 38 after her commander, Captain Henry Roberts, had become terminally ill at Jamaica, but within two days she was wrecked on the Morant Keys in a heavy gale. At the time she was in company with the Leviathan 74, Commodore John Duckworth, to which ship all her cannon were removed. Despite this calamity Winthrop was posted captain on 16 December 1796.

In December 1797, having returned home, he was appointed to succeed Captain Peter Halkett aboard the Circe 28, stationed at the Nore, and which he joined immediately after she had hosted the court-martial of Captain John Williamson for neglect of duty at the Battle of Camperdown two months earlier. During March 1798 he sailed with the Hamburg convoy from the Nore, and in April he cruised off Margate in defence of the coast under the orders of Captain John Lawford of the Romney 50. He then commanded the Circe in the expedition to Ostend in May, superintending the landing of troops, organising the destruction of the dockyard facilities, and being honoured with the delivery of Commodore Home Popham’s dispatches to arrive at the Admiralty on the 22nd.

The Circe saw further service with Admiral Lord Duncan’s North Sea fleet, and in July 1798 sailed from the Nore with the Archangel convoy. After separating, she captured two Dutch vessels which were returning from Greenland and Iceland, both of which reached Lerwick in the nearby Shetland Islands on 30 July, and she followed this up with the capture of a number of other whalers which were sent in to the Bressay Sound in the Shetlands over the next few weeks. At the end of September she arrived at Sheerness with another batch of captured whalers carrying over fifty whales and an immense quantity of blubber. She then left Sheerness on 25 October with the Elsinore convoy of a dozen vessels to arrive on 3 November, and she began the return voyage with five other men-of-war and some three hundred and fifty ships in convoy at the end of the month to enter the Humber in early December. 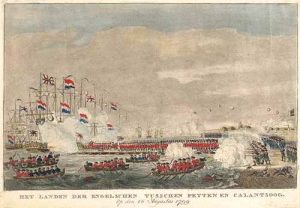 During the early months of 1799 the Circe remained with the North Sea fleet at Yarmouth before in early May she sailed again for Elsinore from Sheerness with a large convoy to arrive on the 21st. After returning to Yarmouth, Winthrop next commanded a small squadron on the coast of Holland including the Jalouse 18, Commander John Temple, Pylades 16, Commander Adam Mackenzie, and Espiegle 16, Commander James Boorder. On 27 June, having initially gone in search of a number of gunboats off the island of Ameland in the West Frisian group, the boats of the squadron cut out a dozen merchantmen under heavy fire from the inlying Wadden Sea without one casualty, following this up on 10 July when they cut out three more.

Winthrop subsequently commanded the Circe during the invasion of the Netherlands from August – October 1799, being sent with Colonel Frederick Maitland under a flag of truce to unsuccessfully demand that Vice-Admiral Samuel Storij surrender his fleet in the Helder. He then took possession of two old Dutch sail of the line and eleven frigates, corvettes and sloops that were lying in the Nieuve Deep at the end of August, together with the magazine at Nieuve Werk. After reaching the Admiralty on 16 September with dispatches from Vice-Admiral Andrew Mitchell and General Sir Ralph Abercromby he rejoined the expedition, and his boats cut out the schooners Lynx 12 and Perseus 8 within musket shot of the batteries in the port of Delfzijl in the River Ems on the night of 8 October after a twenty-mile row from the frigate. During November he undertook a mission to Cuxhaven from the Helder, and at the end of the year the Circe returned to Sheerness.

In February 1800 Winthrop replaced Captain Joseph Yorke aboard the eighteen-pounder frigate Stag 32 at Plymouth, going out on a cruise during which he attempted, in co-operation with the Triton 32, Captain John Gore, to burn the wreck of the Repulse 64 near Quimper after she had struck a sunken rock south of Ushant on 10 March whilst her commander, Captain James Alms, was incapacitated by a fall. The Repulse had been kept afloat long enough for her officers and men to land on the Glenans Islands, but unfortunately the French had beaten the Stag and Triton to the site of the wreck and had erected a battery that was able to keep them at bay.

The Stag next joined the Channel fleet before serving in Rear-Admiral Sir John Borlase Warren’s squadron that was sent to Ferrol in August. By the end of the month she was serving under the orders of Captain Sam Hood of the Courageux 74 off Vigo, but she was wrecked in Vigo Bay without loss of life on 6 September after a hurricane force wind had parted her cable and thrust her ashore. Fortunately, the frigate was driven into a cavern in the rocks, and although the squadron’s boats could not be despatched to assist her she was able to launch her own boat inshore from which her crew were ferried to safety. With the wind easing her men were then brought off before they could be made prisoner. Once her stores had been removed, she was set ablaze by Winthrop and the first lieutenant, Samuel Pym, although they were fortunate to escape being lost to a raging surf. Her men were then distributed amongst the other vessels of the squadron.

Following the renewal of hostilities with France in 1803 Winthrop joined the Ardent 64, sailing from Sheerness through the Downs in April and reaching Plymouth before putting back to join the Channel Fleet in Torbay. On 27 August the Ardent arrived at Plymouth to take on livestock and vegetables for the fleet off Brest, a task she repeated at the end of October. Shortly afterwards she was detached to join Commodore Sir Edward Pellew’s squadron off Ferrol, and on 28 November her pursuit of the Bayonnaise 32 en-flute, ended with the French electing to run ashore near Cape Finisterre and set their ship on fire.

Winthrop remained under Pellew’s orders into the following year before being sent to Beerhaven Bay, Ireland, to revictual in the early spring of 1804. After a refit at Plymouth the Ardent was ordered around to the Downs in April where she occasionally flew the flag of the commander-in-chief, Admiral Lord Keith, and she participated in the raid on Boulogne on 3 October. She continued her service in the North Sea during the first half of 1805, and during this period Winthrop also sat on a select committee to investigate the circumstances surrounding the impressment of David Bartholomew by Admiral the Earl of St. Vincent on 17 December 1803.

Winthrop removed to the eighteen-pounder frigate Sybille 38 in July 1805, occasionally flying the flag of Rear-Admiral Henry Edwyn Stanhope at Gravesend, and in November he conveyed specie to Cuxhaven. In April 1806 the Sybille arrived at Dover with a convoy from Ireland, and she later sailed from Plymouth on 18 May to join the Channel Fleet before returning to the Devonshire port on 9 November. On 3 May 1807 she captured the Bordeaux letter-of-marque Oiseau 4 after a long chase, and on 9 July Winthrop was succeeded at Portsmouth by Captain Clotworthy Upton in order that he could take command of the Dover Sea Fencibles, a role he continued in for the next three years. Thereafter he did not see any further active service.

In March 1815 he was introduced to the Prince Regent at a levee by Admiral Sir John Duckworth, and he was promoted rear-admiral on 12 August 1819, being presented to the newly installed King George IV in the following May. During September 1821 he and his family were present in the French town of Bergues, south of Dunkirk, when King George was honoured by a military parade, and it was reported that the King opened his carriage window and engaged Winthrop in an earnest conversation. In May 1822 he attended a dinner at Dover for the Prince and Princess of Denmark, and although his wife died after a few days’ illness in Brussels on 27 April 1825 he continued to undertake frequent visits to the continent from the Kent port, as well as hosting events in the town.

He married Sarah Farbrace of Dover on 23 December 1804 at St. George’s Church, Hanover Square, and in addition to two sons had four daughters who were all still unmarried at the time of his death. His sons, Hay Erskine Shipley Winthrop and George Teale Sebor Winthrop, both entered the Navy to reach the rank of commander, and his nephew, Richard Augustus Yates, rose to the rank of vice-admiral. An infant daughter died at Dover in January 1815.