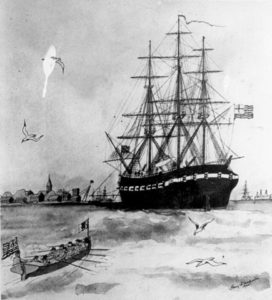 Captain Howe earned fame for his stout defence of HMS Glasgow against a superior american squadron including the Alfred, here pictured.

Died 1783. He was the second of five sons of William Howe of Mislethorne, Essex, and of his wife Millicent Stephens. His older brother, Captain William Howe of the navy, died in 1760, and he was the nephew of the influential First Secretary to the Admiralty, Philip Stephens, who held the position from 1763-95. His sister Millicent married Captain Thomas Wilkinson.

Howe was commissioned lieutenant on 10 September 1765 and promoted commander of the sloop Vulture 14 on 28 December 1770, which vessel he paid off at Deptford in May 1771. In September 1772 he took the sloop Cruizer 8 out to the North American station, and he later saw service off the Carolinas and in the following year off Virginia and at Rhode Island, retaining this vessel until 1775.

He was posted captain of the Glasgow 20 on 11 January 1775, seeing service at Boston and at the Battle of Bunkers Hill on 17 June, and later being stationed at Rhode Island. On 6 April 1776 his command staged a two hour engagement in the dark of night off Block Island near Rhode Island with a superior American squadron consisting of the Alfred 24, Columbus 20, Andrea Doria 14, Cabot 14 and Providence 12, led by Esek Hopkins. After a gallant resistance in which she suffered some damage aloft the Glasgow made good her escape. Casualties on the British side numbered one dead and three wounded, with two dozen casualties on the American side.

In August 1776 Howe recommissioned the Thames 32, taking her out to North America in December and capturing the rebel brig Raleigh 10 on 27 April of the following year. By the summer of 1777 he was commanding the Thames off the Virginia Capes and in Chesapeake Bay, but his frigate was badly afflicted by a fever that left him indisposed and dozens of his men dead. He later sat on the court martial into the loss of the Augusta 64 in the Philadelphia campaign of 1777. After joining Commodore Sir George Collier’s expedition against rebels on the Connecticut coast during the summer of 1779 and seeing almost continual service in North America the Thames was eventually paid off in September 1782.

His will indicated that he lived at Thames Ditton in Surrey.