1747-1825. He was born on 26 December 1747, the third and youngest son of Lord Anne Hamilton, who was named after his godmother, Queen Anne, and of his wife, Anna Charlotta Maria Powell. He was the grandson of the 4th Duke of Hamilton, and the younger brother of Lieutenant-Colonel James Hamilton.

Hamilton was commissioned lieutenant on 12 December 1769 and promoted commander of the sloop Fortune 14 on 11 June 1778. He served with this vessel in the Channel and was present at the Battle of Cancale Bay on 13 May 1779. As a reward for his efforts on that occasion he was posted captain on 18 May and ordered to commission the new Champion 24 for service in the Channel fleet. He saw further employment in the North Sea before returning to the Channel fleet and leaving his command in October. From May 1781 until the end of the American Revolutionary War he commanded the frigate Apollo 32, taking a convoy out to the Mediterranean during early 1782, under the orders of Captain Robert Man of the Cerberus 28, the misidentification of which off Cape Spartel inadvertently caused Captain Charles Morice Pole to burn his recent capture, the Spanish frigate Santa Catalina, which had been taken on 16 March. 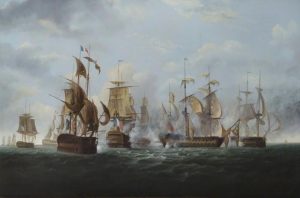 The sacrifice of HMS Alexander in 1794 allowed Captain Hamilton’s Canada to escape capture by a superior French force.

In October 1793 he recommissioned the Canada 74, which in company with the Alexander 74, Captain Richard Rodney Bligh, was chased by Rear-Admiral Nielly s squadron on 6 November 1794, the Alexander bravely sacrificing herself in order to allow the Canada to effect her escape. Having left his ship earlier in the year Hamilton subsequently commanded the Prince 98 in the Channel Fleet from 10 June 1795, being present but not fighting at the Battle of Groix on 23 June and paying her off at Portsmouth on 23 June 1796.

Hamilton married Lucretia Prosser in May 1777 and had issue a daughter and two sons, the younger of whom, Augustus, becoming a lieutenant in the navy.