1744-92. He was born on 30 May 1744, the eldest of four sons of Constantine Phipps, first Baron Mulgrave in the Irish peerage, and of his wife Lady Lepell Hervey, the granddaughter of the 1st Earl of Bristol and sister of Admiral Augustus John Hervey, the 3rd Earl of Bristol. His younger brothers included Captain Hon. Charles Phipps, and General Hon. Henry Phipps who became the Earl of Mulgrave, and served as foreign secretary from January 1805 to February 1806 and the first lord of the Admiralty from 1807-10.

Having received an education at Eton, Phipps joined the Monmouth 70, commanded by his uncle, Hon. Augustus John Hervey, in early 1759, which ship maintained a much-praised watch on the French fleet in Brest that autumn. After removing with Hervey to the Dragon 74, Phipps was present at the reduction of Martinique and St. Lucia in early 1762. He was promoted lieutenant of the Dragon on 17 March by the commander-in-chief of the Leeward Islands, Rear-Admiral George Brydges Rodney, and in this capacity he served at the reduction of Havana that summer.

On 24 November 1763 he was appointed to command the sloop Diligence 10, seeing service in North America, and he was posted captain of the Terpsichore 26 on 20 June 1765. In April of the following year he joined his old school friend, the naturalist Joseph Banks, aboard the Niger 32, Captain Sir Thomas Adams, which in sailing for Newfoundland to protect the fisheries and undertake surveys of the coast also allowed Banks and Phipps to botanise. During the visit Phipps built a house at Croque on the northern coast of Newfoundland and established a garden there. Having returned home he then commanded the Boreas 28 in the Channel during 1767, although he retained her for but a short time. 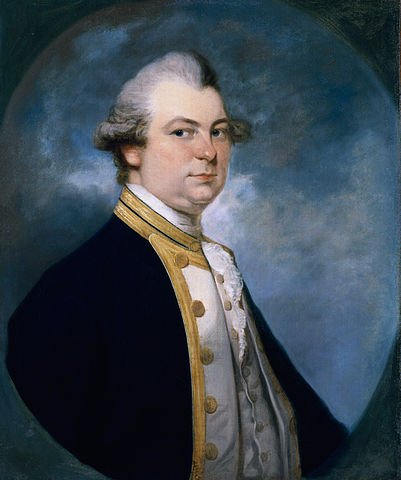 In 1768 he was elected M.P. for Lincoln, and he became a keen attendee of the House of Commons. His active mind still yearned for exploration and adventure however, and seven years later he was appointed to the sloop Racehorse 18 in command of an expedition which also included the Carcass, Captain Skeffington Lutwidge, and which set out in June 1773 to seek a northern route to India. In the event the expedition got no further than the Seven Islands above Spitzbergen in the Arctic Ocean before being turned back by the ice. The Racehorse was paid off in October, and as a result of the voyage Phipps was able to publish the first scientific account of the hitherto little-known polar bear.

Following his father s death on 13 September 1775 he succeeded to the Irish peerage, and in 1776 was elected M.P. for Huntingdon, having lent the first lord of the Admiralty, the Earl of Sandwich, 2,000 to secure the seat which had previously been held by Sandwich s son. From 4 December he served as a lord of the Admiralty under Sandwich, a position he retained until resigning in March 1782 upon the change of government. During this time he was a regular spokesman for the Admiralty in the House of Commons.

In late 1776 he was appointed to the Ardent 64, cruising in the Bay of Biscay, and in the spring of 1778 his good friend and first lieutenant from the Racehorse, Captain Henry Harvey, commissioned the Courageux 74 for him. He fought at the Battle of Ushant in July on 27 July 1778 where he distinguished himself by setting his ship at the massive French three-decked Ville de Paris 104 which had strayed well to leeward of the line of battle. In passing her to windward with her jib-boom scraping by, he delivered such a massive broadside that any other British ship passing to windward of her could have secured a capture. In the event this did not happen, as they all passed to leeward. The Courageux suffered nineteen casualties in the battle, and during the court-martials that followed Mulgrave, who had been in Vice-Admiral Sir Hugh Palliser s division, supported his fellow lord of the Admiralty against the commander-in-chief, Admiral Hon. Augustus Keppel, being one of a minority in the service to do so.

During the opening months of 1779 Captain Henry Harvey temporarily acted for Mulgrave in command of the Courageux whilst he was a witness at the court-martial of Admiral Keppel. The Courageux then entered Portsmouth to be coppered and refitted on 1 April, and under Mulgrave s command she continued with the Channel fleet, serving under Admiral Sir Charles Hardy, of whom Mulgrave initially approved. He was present at the Channel Fleet Retreat in August, and thereafter was employed under Admiral Francis Geary in the Channel fleet campaign of June – December 1780, and from the autumn with Vice-Admiral George Darby, whom he admired for pulling the disparate political opponents of the fleet together.r.

On 4 January 1781, with support from the Valiant 74, Captain Samuel Goodall, the Courageux effected the capture of the French frigate Minerve 32 off Brest, this being a highly skilled action considering the rough seas which prevented Mulgrave s command from opening her lower gun-ports. Even so, the French vessel, commanded by the Chevalier de Grimouard, maintained a fierce if futile resistance of over an hour which did her great credit, losing the use of all her masts and suffering the enormous casualties of fifty men killed and twenty-three wounded, the latter including her gallant captain. The Courageux herself lost ten men killed and seven wounded. The captured vessel had previously been the British Minerva 32, Captain John Stott, which had been taken by the Concorde 32 on 2 August 1778.

Mulgrave later commanded the Courageux at the relief of Gibraltar on 12 April 1781, and in the Channel fleet campaign from June-November, although his brother occasionally acted for him, he returned to the command for the campaign of April – August 1782, serving mostly with Rear-Admiral Richard Kempenfelt off Brest. He was present at the relief of Gibraltar on 18 October, and lost a midshipman killed and four men wounded in the engagement off Cape Spartel. In March 1783 the Courageux was paid off and Mulgrave did not see any further active service.

In 1784, having lost the support of Sandwich in the political fall-out of the Fox-North coalition, he became the M.P for Newark in the Duke of Newcastle s interest, as well as a privy counsellor and paymaster-general of the joint forces in William Pitt s government. In 1787 he spoke in favour of allowing the navy to decide upon the yellowing of admirals in the debate which eventually led to the resignation of Lord Howe as first lord of the Admiralty on 16 July. He briefly held the command of the new Leviathan 74 during the Spanish Armament of 1790, and he became a peer of the United Kingdom on 7 July.

Mulgrave resigned his ministerial positions in 1791 because of ill-health, and he died at Liege on 10 October 1792.

On 20 June 1787 he married the 17 year-old Anne Elizabeth Cholmley of Howsham in Yorkshire, but she died in the following year when giving birth to his only child, a daughter, who was also christened Anne Elizabeth.

A great friend of the famous Joseph Banks, Mulgrave was involved in societies for the improvement of naval architecture, and reputedly had the best nautical library in England. He was a fellow of the Royal Society, being well versed in mathematics and astronomy and having a keen interest in fauna and to a lesser degree flora. A keen socialite, he was a supporter of the arts and was viewed as witty and highly intelligent, being an effective and industrious officer and administrator. Perhaps he could be forgiven for being viewed as a man who had an air of superiority.

Mulgrave was often mimicked in Parliament for his thoughtful, deliberate speeches and his light, undignified speaking voice. By 1775, despite having lost an election in the Radical interest a year previously, his political tendency was that of an advocate of the King s friends with a fervent opposition to the Whigs. This was partly as a result of his association with Joseph Banks, and also because of his support for the American war. He became a strong ally of Lord Sandwich, who relied heavily upon his advice, although the first lord of the Admiralty neither allowed Mulgrave the early promotion of his friends, nor the comfort of a regular acting-captain because of the precedents it would set. Neither did Sandwich adhere to Mulgrave s concerns about appointing Rear-Admiral Sir Samuel Hood to high command, which given that officer s great career was probably just as well.

Mulgrave was an early patron of Admiral Hon. Thomas Pakenham, as he was of Captain William Pryce Cumby, and of Rear-Admiral Sir Edward Berry, whose early education he personally funded.