Died 1778. He was of Cornish extraction.

Stott s early service was as a boatswain to the famous Admiral Hon. Edward Boscawen. Having been master of the Grafton 70, Captain Alexander Hood, he was commissioned lieutenant on 17 February 1757 and appointed the commanding officer of a captured French privateer, renamed the Gibraltar s Prize 14, going out to North America in April and being promoted commander of the same vessel on 5 June. In January 1758 he joined another captured privateer, the Gramont 18, once more going out to North America in the following month.

He was posted captain of the Scarborough 20 by Boscawen on 3 August 1758, serving at the attack on Quebec in 1759, at Louisbourg in 1760, and at the destruction of the French ships Machault 32, Bienfaisant 22 and Marquis de Marloze 16 in Chaleur Bay on 8 July 1760. He returned to England in the summer of 1761, and after a dockyard survey he recommissioned the Scarborough, seeing further service in North America, in home waters, and in the Leeward Islands prior to her being paid off in November 1764. 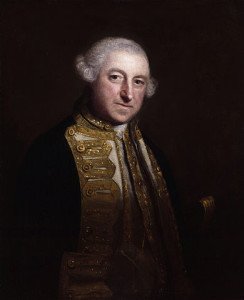 In the autumn of 1770 he was ordered to fit out the Juno 32 at Portsmouth, and after taking on men at the Downs he managed to fill his crew on his own reputation with many Cornish volunteers, in particular from Penzance. In the spring of 1771 he was sent out with two subordinate vessels, the sloop Hound, Commander John Burr, and storeship Florida, to receive the surrender of Port Egmont in the Falkland Islands conversant to the settlement of the dispute with Spain. On 13 September he arrived off the islands, and the next day he met with the Spanish and the transfer was arranged. After arriving home in December following a swift passage this vessel was paid off in early 1772.

From August 1772 Stott had the Alarm 32 serving in the Mediterranean, and in October 1773 he incurred the wrath of the Dey of Algiers for refusing to undertake to return any slaves who might make their escape, this incident leading to the dismissal of the British consul. He later served off North America until the spring of 1776 when he returned to Plymouth.

In November 1777, two months after recommissioning her, he was sent to Nantes in command of the Minerva 32 to recover two merchant vessels that had been captured by an American privateer. He was at Plymouth in early 1778 and then saw service off West Africa and at Jamaica. On 22 August 1778, being unaware that war with France had commenced, the Minerva was intercepted by the frigate Concorde 32 in the West Indies and struck by two broadsides before she could respond. An explosion caused more mayhem, some of her undermanned crew fled below, and Stott was carried from the deck with two head wounds. After two and a half hours she was obliged to strike. The unfortunate Stott and his first lieutenant both subsequently died of their wounds, Stott at Hispaniola some time later.

Stott married the teenage Jane Hamett on 28 December 1755, and his wife later took to the stage as Jane Lessingham. Upon returning home to Dean Street, Westminster in July 1761 after a three and a half year absence Stott found his wife was not only pregnant but was also already the mother to a two year-old daughter. Accordingly he was granted a divorce on 26 June 1765. One of his wife s countless lovers was Admiral Hon. Edward Boscawen, the man who instigated Stott s rise from the lower deck to the rank of post-captain, and was possibly the father of both children. Stott left a widow at his death, at which time his address was given as Torr, Devon.

Stott famously threw Edward Pellew off his ship in 1774 at Port Mahon for making a joke about his mistress. Even so he was regarded as a fair commander who liked to keep his men active, was a fine seaman and could turn his hand to cartography.