Colby was commissioned lieutenant on 11 March 1741/2 and promoted commander on 30 March 1746 of the newly purchased sloop Albany 10 at Louisbourg. His command of this vessel was brief, for after sailing from Louisbourg on 7 July with dispatches for Rear-Admiral Peter Warren at Boston, the Albany was captured by the French frigate Castor 28 in Chedabucto Bay, Nova Scotia on 19 July with the loss of one man killed. By September Colby was back in London seeking a court-martial to enquire into the loss of his ship.

Following the end of the War of Austrian Succession in 1748, he commanded the Grampus 14 from 27 May, which was in the Downs during September, and in early October departed for Calais to collect the Duchess of Newcastle for her return to England. By early 1749 the Grampus was at Leith, and having sailed around to Greenock she operated out of that port for the next few years, bar sailing for Plymouth in the spring of 1750, and to Portsmouth in April 1751 to collect money for the artificers at Plymouth. On 9 September 1751 Colby’s lieutenant led two boats in the boarding of a smuggling vessel at Auld Kirk, during which mission the party not only came under fire from the smugglers, but also had to sustain a volley of stones from their womenfolk. The Grampus’ commission came to an end when she sailed around to the Nore to be paid off in May1752.

Following the commencement of the Seven Years War in 1756, Colby was posted captain of the newly launched Deal Castle 24 on 20 August, although he did not take her to sea, and in July of the following year he was appointed to the Princess Amelia 80, joining Admiral Sir Edward Hawke’s expedition to Rochefort with the flag of Rear-Admiral Thomas Broderick.

In April 1758 he commissioned the new frigate Thames 32 for service in the Channel, and he took her out of Portsmouth on 29 May. Less than a month later, on 24 June, he lost an eye when hit by a musket ball during a three-hour action with a 40-gun French vessel off Brest that saw the latter vessel driven onto the rocks. In compensation for his impairment Colby was later granted a 150-guinea pension. The Thames was taken into harbour on 30 June in a shattered state, and Colby appears to have remained ashore until mid-August. After rejoining Admiral Lord Anson’s Western Squadron, the Thames returned to Portsmouth on 8 September with sixty invalids from that force. 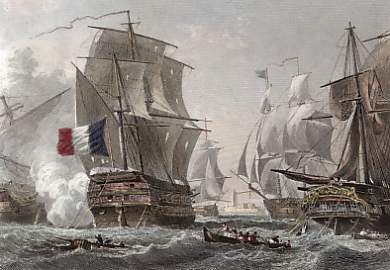 Captain Colby’s Thames, pictured in the right foreground in action some forty years after he first took her sea

Continuing in the Thames, Colby earned a great deal of acclaim when in company with the Coventry 28, Captain Carr Scrope, he fought an action with the French sail of the line Palmier 74 in March 1759. Initial contact was made off the Scilly Islands on the morning of the 12th, and in rough weather that prevented the Frenchman from opening its lower gun ports, the Thames chased her larger opponent and an accompanying frigate towards Brest, occasionally heaving too and exchanging broadsides. At one point the Thames was obliged to break off the action with five feet of water in her hold and her magazine floor flooded, but when the Palmier resumed her course towards Brest Colby brought the Thames with the Coventry under her stern on the darkening afternoon of the 13th and raked her for several hours until she entered port. His command returned to Plymouth for repairs shortly afterwards.

On 18 May 1759 he earned further honour when he assisted the Chatham 50, Captain John Lockhart, and the Venus 36, Captain Thomas Harrison, in the capture of the French frigate Arethusa 32 in Audierne Bay, being instrumental in forcing her into action whilst losing four men killed and eleven wounded. The Chatham and Thames reached Plymouth with the prize shortly afterwards. In February 1760 the Thames brought seven victuallers and a French prize into Plymouth from Quiberon Bay, and Colby remained with her for another year, capturing the French privateer Morech 18 in company with the Coventry off Le Havre, and taking the privateer Bien Aime 12 off Tory Island on 26 September, which prize she carried in Lough Swilly.

It appears that from 21 November 1760 Colby commanded the Intrepid 64, which on 27 December arrived at Plymouth with victuallers from Quiberon Bay after driving a 12-gun privateer snow away from her charges near the Eddystone. In January 1761 she was taken into the Hamoaze at Plymouth for repairs, and here on 21 February two of her crew broke into Captain Hon. John Byron’s residence and attacked his wife and then Byron himself, before being detained by the latter. Colby apparently left the Intrepid on 30 June 1761, and he does not seem to have been re-employed during the Seven Years War.

In January 1771 he recommissioned the guardship Kent 74 at Plymouth, retaining her until May 1772, and he was not employed thereafter until September 1777, when with the American Revolutionary War escalating, he was appointed to the Fame 74 at Plymouth. He commanded this vessel in Vice-Admiral Hon John Byron’s fleet that was sent out to North America on 9 June 1778, arriving off New York on 28 August after a storm had dispersed that force. The Fame departed for the Leeward Islands in December with Byron, but she was dismasted within four days of sailing and was kept in company for another week by the Diamond 32, Captain John Linzee, before a further gale parted them near the Bermudas. Eventually the Fame made it into Barbados under a jury rig.

Captain Colby continued to command the Fame in the Leeward Islands during the early part of 1779, but he died later that year, his demise being reported in the newspapers back home on 5 June

He bought the elegant property of Ffynnonau in Pembrokeshire in 1752, the ownership of which passed to his nephew on his death.