He was commissioned lieutenant on 7 April 1778, and was the first lieutenant of the Janus 44, Captain Bonovier Glover, which formed part of Captain Hon. William Cornwallis squadron that fought a superior French force in the Windward Passage on 20-22 March 1780. When Captain Glover died of natural causes during the action Stephens was obliged to assume command, and he was able to cause significant damage to the French flagship Annibal 74 by manoeuvring off her quarters, although in so doing the Janus suffered badly aloft. Even so, after the action he was somewhat unfairly castigated by Cornwallis for letting Captain Glover die below in his cabin rather than on deck, the latter officer s reputation having been recently tarnished after his officers had brought him to a court-martial.

In December 1793 Stephens was placed in acting command of the French prize brig Goelan 14 which had been captured on the Jamaican station, bringing her back to Portsmouth in the following summer. Having been promoted commander on 7 February 1794 he was later posted captain on 11 October. 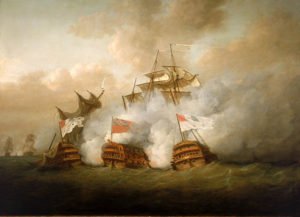 One of Captain Stephens’ later commands was HMS Brunswick, here pictured in the centre of the action at the Battle of the glorious first of June in 1794

In April 1796 he recommissioned the Oiseau 36 in which he sailed from St. Helens’ in August with Vice-Admiral Sir Hyde Parker’s grand convoy before proceeding with the East India element. Towards the end of the year he exchanged with Captain Charles Brisbane into the Tremendous 74, based at Cape Town, but in October 1797 the crew mutinied and attempted to try him in their specially convened court on charges of cruelty and misconduct. Although the insurrection was soon quashed Stephens requested an official court-martial at which he was acquitted, and the unfortunate situation was resolved when he was sent home with despatches aboard the Polyphemus 64, Captain George Lumsdaine, who had arrived at St. Helena to collect the East India convoy.

For a short period from November 1799 until December 1800 Stephens commanded the Barfleur 98 with the flag of Rear-Admiral Cuthbert Collingwood in the Channel, and on 13 January 1801 was replaced by Captain William Bligh aboard the ex-Indiaman Glatton 56 which he had only joined a few weeks previously, thereby depriving him of the opportunity of fighting at the Battle of Copenhagen on 2 April. He was nevertheless quickly appointed to the Brunswick 74, serving in the North Sea and the Channel, and his command was also employed briefly as the flagship to the second-in-command at Portsmouth, Rear-Admiral John Holloway. He next went out to Jamaica with Commodore William Essington s squadron of five sail of the line in October, and thereafter joined Rear-Admiral Sir John Thomas Duckworth s fleet of twenty-eight sail of the line in the West Indies during January – September 1802.

Stephens final command was the Captain 74, which he recommissioned in June 1805 before paying her off nine months later. He was advanced to flag rank on 4 December 1813, and died on Christmas Day 1819 at Great Ealing, Middlesex.

He married and had issue several sons and daughters and was a relation, possibly through marriage, of Rear-Admiral John Bligh.

Stephens was never forgiven by Admiral Cornwallis for letting Captain Glover die below decks, that excellent officer never failing to admonish him in later life. Nevertheless he was regarded as brave and deserving, an excellent seaman, and a man loyal to his friends and subordinates.