Cooke appears to have first gone to sea at an advanced age of twenty when joining the Raisonnable 64, Captain Maurice Suckling, in the autumn of 1770. When this vessel was paid off at the end of the Falkland Islands dispute in 1771 he joined the Crescent 32, Captain John Corner, going out to the Leeward Islands. Following that officer’s death in November 1772 Captain Charles Thompson took over the Crescent, and Cooke remained with the frigate, serving as a masters’ mate until she was paid off in August 1774 at Woolwich.

After a short period aboard the Conquestador 60, Captain James Chads, he obtained a master’s warrant from Captain Suckling, who was by now the comptroller of the Navy, and he joined the sloop Hornet 14 commanded by the tyrannical Commander Robert Haswell, on which vessel Cuthbert Collingwood was a lieutenant, going out to Jamaica in December 1776.

On 1 February 1778 Cooke transferred to the Glasgow 20, Commander Thomas Pasley, in which he returned home shortly afterwards, removing with that officer to the Sibyl 28 which went out to Newfoundland in the spring of 1779 and undertook convoy duty to the Cape in 1780. In the latter part of 1780 he transferred with Pasley to the Jupiter 50. He was present at the Battle of Porto Praya on 16 April 1781, and eleven days later on 27 April was commissioned lieutenant. In May 1782 the Jupiter carried Admiral Hugh Pigot out to the Leeward Islands to assume command of the fleet on that station, and the ship then transferred to Jamaica where she made several prizes before returning to England at the end of the war and being paid off on 28 July 1783.

During the Dutch Armament of 1787 he was aboard Rear-Admiral Sir John Jervis’ flagship Hannibal 74, Commander Josias Rogers, and he was with the same two officers in the Spanish Armament of 1790 aboard the Prince 90.

On the commencement of war with Revolutionary France in 1793 Cooke was appointed the first lieutenant of the sloop Weazle 14, Commander William Taylor, which vessel went out to the Mediterranean with Vice-Admiral Lord Hood’s fleet in the summer before returning from Gibraltar. In November he departed with Vice-Admiral Sir John Jervis’ fleet for the Leeward Islands aboard the storeship Woolwich 44, Commander John Parker, and during the Leeward Islands campaign of 1794, he transferred in March to the captured frigate Bienvenue, which had been renamed the Undaunted 28 and was commanded by Captain Robert Faulknor. 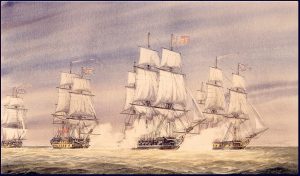 Captain Cooke’s only major command was the frigate Quebec, here picture in a previous action with the Diomede and Astrea against the American privateer South Carolina.

On 5 May 1794 Cooke was promoted commander of the sloop Inspector 16, remaining in the Leeward Islands, and during the early part of 1795 he afforded great protection to the Virgin Islands, for which he received a letter of thanks from the Tortola Council Chamber.

At this point an interlude of confusion intruded on Cooke’s career as he was first ordered by Vice-Admiral Benjamin Caldwell to take temporary command of the Quebec 32 following the death of Captain Josias Rogers on 24 April 1795, but instead of being sent to join her at St. Kitts prior to going home with the trade he received erroneous orders from Rear-Admiral Charles Thompson. The latter officer then appointed him to the frigate Alarm 32, but on the arrival of the new commander-in-chief, Admiral Sir John Laforey, he was sent home aboard the Montagu 74, Captain William Fooks, in chase of the Quebec which was being commanded by Captain James Carpenter, and which arrived home at the end of July. Cooke eventually reached England on 5 October, but upon reporting to the Admiralty he suffered the disappointment of having his earlier posting to captain by Caldwell cancelled, and was instead posted captain with seniority from 8 September, it being claimed that Caldwell had only been a temporary commander-in-chief by default.

In January 1796 Cooke at last joined the Quebec 32 in which he captured the large French cutter Alpic 10 near Le Havre on 10 March, taking her into Portsmouth. On 11 April it was reported that the Quebec had sailed from Portsmouth for Canada, and it then appears that she collected a convoy for the West Indies from which five vessels were captured in early July by two French frigates and carried into Cap François. Remaining on the Jamaican station, the Quebec drove ashore and burned the privateer Citizen Oloniers near Gonavies on Saint-Domingue with the death of sixteen of her crew. She also captured the privateer Regulus in August and later the corvette Africaine 18 off San Domingo on 3 December, which vessel she carried into Jamaica. On 20 April 1797 the Quebec was sent under the orders of Captain Hugh Pigot of the Hermione 32 in company with three other vessels to attack the French privateer port of Jean Rabel. She then returned to England at the beginning of October with a convoy in the company of the Janus 32, Captain James Bissett, whereupon she was paid off.

Captain Cooke did not see any further active service; however, on the renewal of war with France in 1803 he was appointed to command the sea fencibles from Calshot Castle in Hampshire to St. Alban’s Head in Dorset, and in May 1804 he took command of all the small craft in the Medway. His last service was to superintend the equipping of gunboats for the Walcheren expedition in 1809, and with the disbandment of the Sea Fencibles in 1810 he went on half-pay.

Cooke was superannuated as a rear-admiral on 20 June 1814, and he died on 1 December 1834 at Swanage after a long illness

His wife died at their residence in St. Vincent House, Castle Street, Portchester on 26 February 1822. At the time of his own death it was reported that he had two sons in the naval service.