c1770-1831. He was the son of Lieutenant Robert Kerr, who died as the lieutenant of Greenwich Hospital on 15 March 1804, being at 80 years the oldest lieutenant in the Navy, and having held that rank for 57 years.

Kerr joined the service in November 1781 aboard the frigate Endymion 44, Captain James Gambier, who resigned the command shortly before it went out to the West Indies in February 1782, being succeeded by Captain Edward Tyrell Smith. He saw further service on the Leeward Islands station aboard the Nemesis 28 with Captain Smith and the Alarm 32, Captain Charles Cotton.

From the summer of 1784 he was in the Leeward Islands aboard the Boreas 28, Captain Horatio Nelson, and he returned to England aboard the sloop Rattler 16, Acting-Captain Lieutenant James Wallis, who had succeeded the late Commander Wilfred Collingwood. This vessel was paid off in October 1787.

Kerr next joined the Plymouth-based guardship Orion 74, captained by Sir Hyde Parker from the end of 1787 until she was paid off in February 1788, from which he transferred to the Narcissus 20, Captain Philip d’Auvergne, being engaged in the collection of intelligence off the French coast. He was retained aboard this vessel under the command of Captain John Salisbury for a few months in 1790. During the Spanish Armament of 1790 he was aboard the Boyne 98, Captain George Bowyer, and having been commissioned lieutenant on 15 November he returned to serve on the Narcissus from April to October 1791 as the first lieutenant to Captain Paul Minchin.

The action between the Boston and the Embuscade in 1793

In 1793 he was the second lieutenant of the frigate Boston 32, and during the inconclusive action with the Embuscade on 31 July off New York in which Captain George Courtney lost his life he was led below having lost the sight of one eye, been partially blinded in the other, and with grape shot in his shoulder. The Boston retired to Newfoundland to effect repairs and eventually returned to England in 1795 under the command of Captain James Nicoll Morris.

Further service followed in home waters aboard the Repulse 64, Captain William Fairfax, and in the spring of 1796 he joined the Clyde 38, Captain Charles Cunningham, which frigate conspicuously remained loyal in the Nore mutiny from 12 May 1797. He was her first lieutenant, when on 20 August 1799 she easily captured the French Vestale 36 off the mouth of the Garonne, and altogether he spent six years with Captain Cunningham in that successful vessel.

Kerr was one of many officers promoted commander on 29 April 1802, and in June he was appointed to the Diligence 16 at Sheerness. He was stationed in the mouth of the Thames during March 1803 to impress seamen coming into the river following the recommencement of hostilities with France, and he later took the Baltic convoy out from Leith in July, repeating that duty in the following spring whilst also commanding the Diligence in the Channel and in particular off Boulogne where he was daily employed in activities against the enemy.

In June 1805 he joined the Combatant 18 at Portsmouth in succession to Captain Hon. George Elliott, in which he assisted the brig Bruizer, Lieutenant Thomas Smithies, in the capture of the Boulogne privateer lugger Impromptu 15 off Cap Gris Nez on 29 January 1806.

Kerr was posted captain with seniority from 22 January 1806, but a ship of his own was not immediately forthcoming and he remained on the beach until August 1808 when he temporarily commanded the Tigre 80 for Captain Benjamin Hallowell, taking her out from Portsmouth to serve off Brest and then entering Plymouth on 2 October.

He next held the temporary command of the Valiant 74 for Captain John Bligh who had been appointed in January 1809, and he was off the Island of Groix on 2 March in company with the Theseus 74, Commodore John Beresford, and Triumph 74, Captain Sir Thomas Masterman Hardy, when they sighted the Revenge 74, which Bligh was bringing out from England for Captain Hon. Charles Paget, and in his wake Rear-Admiral Jean Baptiste Philibert Willaumez’ Brest squadron of eight sail of the line and two frigates. Over the succeeding days, during which time Kerr exchanged with Bligh into the Revenge, Beresford’s squadron had a sporadic contact with the French, and it was able to join Rear-Admiral Hon. Robert Stopford’s Rochefort squadron on 25 March in blockading Willaumez when he entered the Basque Roads.

At the controversial Battle of the Basque Roads on 11 April 1809 Kerr commanded the Revenge 74 for the absent Paget, and he was praised by Captain Bligh when that officer managed to prevail upon the hesitant commander-in-chief, Admiral Lord Gambier, to allow him four sail of the line to work inshore and assist Captain Lord Cochrane in his attack on the stranded French ships. During the subsequent action the Revenge played a prominent part, despite at one point appearing to ground in the mud. On the morning of the 13th she was fired at by the batteries on the Ile de Aix, sustaining severe damage to her bowsprit and rigging, and losing three men killed and five wounded. Following the battle the Revenge remained for a short while in the Basque Roads under the orders of Commodore Stopford before returning to Portsmouth on 29 June.

Upon the Admiralty learning of his exploits in the Basque Roads Kerr had been appointed to the Isis 50 in May, and then almost immediately to the recently captured Ganymede 24, but events overtook him and rather than take either to sea he instead found himself required as a key witness at the court-martial of Lord Gambier, which took place aboard the Gladiator 44 at Portsmouth from 26 July to 4 August. After giving his initial evidence he was recalled a further three times, and his testimony was seen as beneficial to Gambier, particularly when he opined that that had Bligh’s four sail of the line gone in earlier to attack the stranded French they might well have been crippled.

Shortly afterwards in August 1809 Kerr joined the Unicorn 32, cruising off France and Spain and making a prize of the Bayonne privateer Gascon 16 on 3 February 1810. On 12 April off the Ile de Rhe he re-took the ex British sloop Laurel 22, renamed the Esperance, which had been previously captured in the Indian Ocean by the Cannoniere 38 and was returning from Mauritius with a valuable cargo. She was bought back into the Navy as the Laurestinus 22. 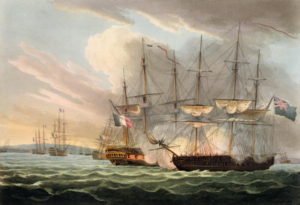 In early April 1811 Kerr was appointed to the Acasta 40 fitting out at Plymouth, and after sailing for Weymouth and Portsmouth at the beginning of June he departed Plymouth later that month with supplies for the squadron in the Basque Roads. By September he was off Corsica where his boats took an American merchant brig in a calm, and by October was off Bordeaux, where again he was successful in making prizes of American merchantmen. The Acasta returned to Plymouth from the Basque Roads on 5 November to be refitted. In early December she departed for Portsmouth with a small convoy, and on 30 December left the Hampshire port with half a dozen East Indiamen, putting into Torbay a few days later. After seeing them out to the Azores she returned to Deal with the homeward bound East India convoy in May 1812.

At the end of June 1812 the Acasta sailed for Lisbon from Portsmouth with the flag of Vice-Admiral George Martin, and from there she proceeded to Halifax, capturing in passage the American privateer Curlew 16 on 24 July off Sable Island. She then departed to cruise off Bermuda. Her arrival on the North American station was significant in so much that the Americans considered her the only worthy opponent for their superior frigates which had enjoyed so much success in the early years of the War of 1812. Kerr in turn longed for an encounter with one of the large American frigates, and the Naval Chronicle shared his view that as the best armed, officered and manned frigate in the service she deserved the opportunity. Equally the public back home yearned for a victory over the American frigates, and many stories would appear in the press during the coming months of possible engagements between the Acasta and the hitherto all-conquering Americans, but alas none of them proved to be true.

Continuing on the American coast, the Acasta helped herself to numerous prizes. Amongst these were the brig Herald 18 from Bordeaux bound to Baltimore off Cape Henry on Christmas Day when in company with the Poictiers 74, Captain John Beresford, with whom the Acasta cruised for some time and took or destroyed three dozen enemy vessels, mostly in Chesapeake Bay and then from early March 1813 in the Delaware.

On 9 April 1813 the Acasta was off Sandy Hook where she remained for the next few weeks in blockade, and by 1 June was in Long Island Sound in the company of the Valiant 74, Captain Robert Oliver, the two vessels capturing the American letter-of-marque Porcupine 20 on 17 June after a hundred mile chase that had commenced off Cape Sable. In the same month they chased the American frigate Macedonian 38 and sloop Hornet back into New York. On 11 September the Acasta was sent up Long Island Sound with the Atalante 18, Commander Frederick Hickey, where they burnt or brought out fifteen vessels.

From the spring of 1814 Kerr’s command was in the Chesapeake with Rear-Admiral George Cockburn, and by the late summer was back at Halifax. On 31 December, being in company with the Leander 56, Captain Sir Ralph Collier, and Newcastle 50, Captain Lord George Stuart, she captured the prolific privateer Prince of Neuchatel 18 between the Newfoundland Banks and Western Isles after a day-long chase. Continuing to cruise with the same vessels, in early 1815 she was present at the blockade of the Constitution 44 in Boston, and following the American frigate’s break-out and action with the sloops Levant and Cyane on 20 February Collier hunted her down to the Cape Verde Islands. On 11 March the squadron came up with the Constitution, but following a chase in which the Acasta was handicapped by her desperate need for a refit the American frigate escaped, although the Levant was re-taken. The Acasta returned to Portsmouth with a convoy of over fifty transports on 14 July to be paid off in the Thames during August.

Kerr retired to Great King Street, Edinburgh, where he was often seen in society. During 1815 he was nominated a C.B. and in December his name appeared in the newspapers when a clerk in the Victualling Office by the name of William Bradford was hung for the crime of forging a bill of exchange for £868 in his name.

Kerr died at Stonehouse, Plymouth on 4 August 1831 of the skin disease erysipelas, having been infected by his son who had been landed there from the Dublin 74, and whom he had rushed down from Scotland to visit. His body was interred in Saint Cuthbert’s Graveyard, Edinburgh.

On 15 January 1805 at Leith he married Charlotte Maule, the daughter of a physician who had served in India. The couple had seven children, the oldest of who, Robert, reached the rank of admiral. The address in his will was given as Edinburgh.

Kerr was well regarded by his men, but his career suffered for a lack of influence and standing. He was blind in one eye as a result of the action with the Embuscade in 1793.